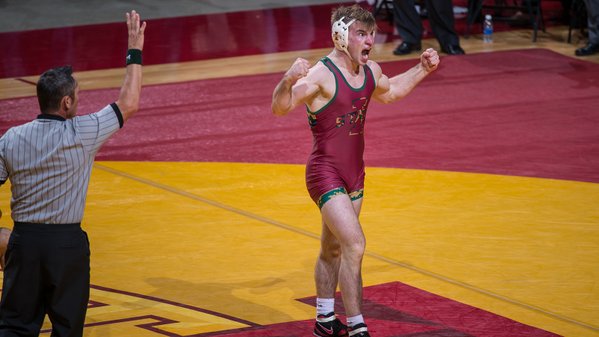 AMES — With 10 seconds left in the third period, redshirt freshman 157-pound wrestler Logan Breitenbach was tied 4-4 against Boise State’s Chris Castillo. In those 10 seconds, he secured a takedown to beat Castillo 6-4. And after claiming the victory, Breitenbach did a hulk-like celebration toward the Iowa State crowd during the Cyclones’ 34-3 win on Nov. 12 over the Broncos.

That takedown was such a crucial part of the Iowa State-Boise State duel that the Cyclones.tv twitter account tweeted out a video of those final 10 seconds:

@LoganBback with a takedown at the end of the 3rd for the win. Cyclones lead Broncos 16-3. #ALLINfor100https://t.co/2TXvxJ8KUt

Breitenbach then quoted that tweet, adding, “Man it feels good to be a Cyclone.”

Sorry to adopt the famous tone of ESPN Films: 30 for 30 here, but what if I told you Breitenbach didn’t always dream about donning a cardinal and gold singlet?

“When I was young I asked my dad which school had the best wrestling program at the time,” Breitenbach said. “My dad told me the top wrestling program was the Iowa Hawkeyes and being a little kid who didn’t know better, I grew up a Hawkeye fan.”

Although he grew up that way, he never attended an Iowa wrestling meet as he grew up in Annapolis, Maryland. However, Breitenbach was such a huge Iowa fan that whenever the Hawkeyes were on television he made sure to tune in.

Now he gets a chance to face the program he once rooted for: The Cyclones host the Hawkeyes Sunday at 2 p.m. at Hilton Coliseum.

Growing up in Annapolis, he became one of Maryland’s most outstanding wrestlers.

Nationally, Breitenbach was named a two-time Fargo All-American, reached the podium three times at nationals as a prep athlete and was named the Washington Post’s top-ranked wrestler coming out of his high school at the 160-pound weight class. In 2012, he was the 152-pound champion in Greco-Roman style of wrestling at the Pan American games.

“[Breitenbach] is one of the best wrestlers that has come out Maryland in a while,” said ISU coach Kevin Jackson back in an article for Cyclones.com back in 2013.

Being such a decorated wrestler, Breitenbach attracted offers from the nation’s top wrestling programs, including Iowa and Iowa State.

Breitenbach took unofficial visits to both programs when he was in Iowa for the USA Wrestling Preseason Nationals Tournament right before his junior year.

During those visits, Breitenbach realized there were differences between the two schools.

“I just felt more at home here at Iowa State,” Breitenbach said. “The family aspect I received from the coaches and the other wrestlers on the roster was the ultimate factor.”

And with that, the once Hawkeye fan became a Cyclone.

Once Breitenbach committed to Iowa State, he had one last chore to do.

“Since I grew up being such a big Iowa fan, my room was decked out with Iowa gear,” Breitenbach said.

So Breitenbach replaced his Hawkeye gear with Cyclone gear, and packed up all his Iowa items in boxes and donated it to his local youth wrestling club.

As mentioned above, Breitenbach is a redshirt freshman, which means he didn’t have a chance to compete in the Iowa State-Iowa wrestling meet last year in Iowa City. But this year he does.

Breitenbach has been the main 157-pound wrestler for Iowa State this season and  looks forward to helping the Cyclones get rid of the bad taste in their mouth from last year’s 28-8 defeat at Carver Hawkeye Arena.

“Just sitting on the bench and watching our team performance against Iowa last year makes you want to go out there and dominate,” Breitenbach said.

And what would the feeling be like for Breitenbach if he secured a victory over the team he once cheered for?

“Obviously when you win a match it feels good,” Breitenbach said. “But beating the Hawkeyes is on a whole other level, and we expect that out of ourselves, to beat them.”