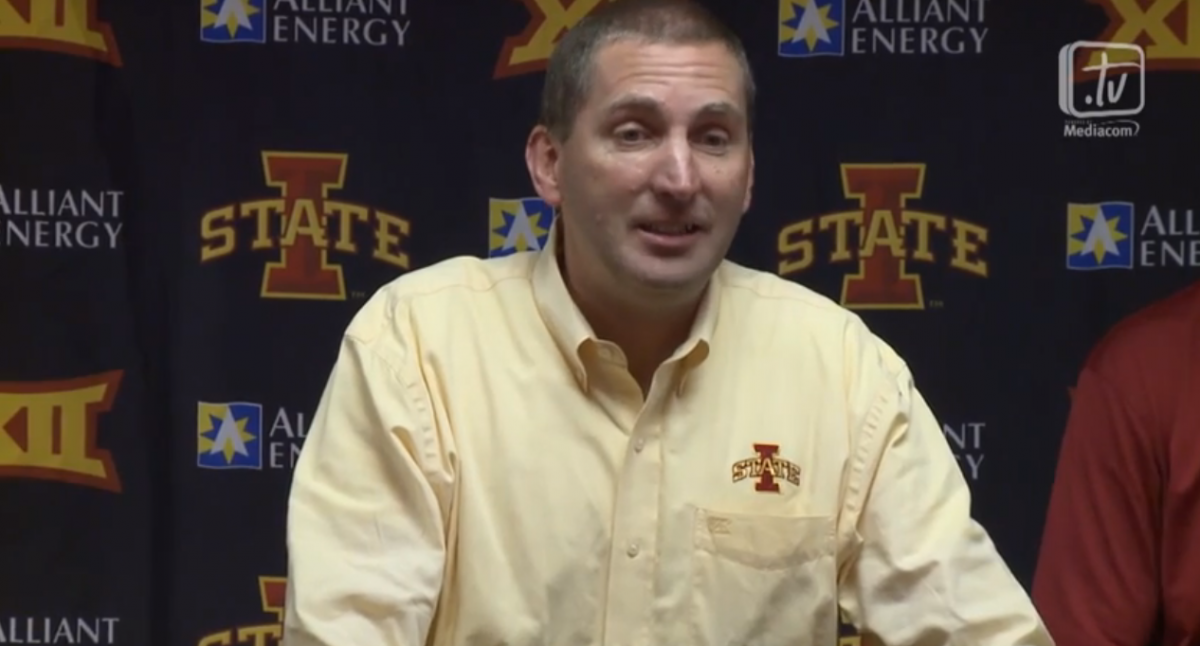 On the field, Iowa State lost to a better team.

Jamie Pollard’s postgame statement – where he very publicly criticized the Big 12’s officiating is the story – a huge one at that. There is a reason why national publications like Deadspin picked this up. That’s because it is extremely rare to see somebody in Pollard’s position do anything remotely close to this.

If you haven’t watched Pollard’s statement, check out the video below.

The call that Pollard is talking about happened at the end of the first half. This statement was issued a good two hours (at least) after that. Jamie Pollard didn’t become the athletics director at Iowa State by being stupid.

“I recognize that the Big 12 does not allow comments to be made on officiating,” Pollard said. “And I recognize there are penalties for that. But folks, our institution has been penalized already.”

This was a calculated statement that Pollard thought about for a good chunk of time. This isn’t anything like the anger that Paul Rhoads showed towards officials after last season’s loss to Texas. Rhoads was thrown into a press conference after that call that went against his Cyclones. Pollard, an AD, had hours to think about this.

He chose to go to bat for his coach, the players and his school.

An opinion on the Pollard statement – kind of

To the “sour grapes” crowd out there, I get it. No doubt about it. I see this point.

But just because Iowa State wouldn’t have won the game had the reversal never happened (just my opinion) doesn’t mean that Pollard’s point doesn’t stand true. If you have followed Iowa State athletics over the last couple of years, you can see how Pollard and others wearing the school colors are rightfully frustrated and downright angry.

This is the point of the speech where it gets a little dicey for me.

“Coach Rhoads and I a year and a half ago raised an issue and we were the lone vote,” Pollard said. “And ever since that time, we have been on the short end of the stick. I don’t know how things change but it is frustrating and it’s not fair.”

I’m not doubting Pollard, but that is a pretty large statement. That’s conspiracy theory type stuff.

I’d sure like to know more about that "issue," that Pollard was speaking of. It’s hard to have a hard opinion on that part of the statement without the prior knowledge.

At the end of the day, just like I won’t ever criticize Paul Rhoads for his patented sideline freak-out sessions, I won’t come down on Pollard for Saturday afternoon.

That is who these men are.

Rhoads’ sideline demeanor and off-the-cuff press conferences represent who he is – a very genuine dude. He is the same guy in front of the camera as he is off.

So is Pollard, a proud man who like many fans watching, had simply had enough on Saturday afternoon.

If you’re a fan, don’t you want the CEO of your athletic department to care that much?

I echo what John Walters tweeted out after the game: “Iowa State athletics could not be in better hands.”

“That ends careers for football coaches, AD’s and presidents. Something has got to be done.”

Perhaps I am thinking too deeply about this but in my mind, Jamie Pollard would not say this if he didn’t have all intentions of bringing Paul Rhoads back next season.

Also note that never once have I thought that Rhoads’ job has been in jeopardy.

But my point is, if in some odd situation Rhoads’ security was being questioned by the higher ups at Iowa State, I don’t see Pollard publicly going to bat like this.

And to Pollard’s point, think about how differently Iowa State’s 2013 season could have gone had the end of the Texas game not been botched last October. Would the Cyclone have gone to a bowl game? Probably not, but they sure wouldn’t have been 3-9 and Rhoads’ offseason (personally and from the standpoint of the program) could have been significantly different.

I’ll reiterate that I don’t believe Saturday’s replay head-scratcher cost Iowa State the game. But other calls in the past have. This seems like a volcano that finally erupted type of a situation to me.

Oh yes. A game was played too.

To sum it up, I feel like Iowa State’s defense played as well as it could in the first half. The Cyclones recorded three sacks and picked Daxx Garman off twice.

The defense made plays and Iowa State’s offense couldn’t capitalize.

Of course, we will fully analyze Saturday in the coming days/week on CF but without watching it back again, I’d say Iowa State’s defense actually took a step forward despite the loss.

The offense however, did not. To the naked eye, this group has regressed for one reason or another.

TCU and Oklahoma put on one heck of a show but the Sooners going down by a 37-33 final was anything but good for the Big 12. The league needed Baylor (who defeated Texas 28-7) and OU to both be undefeated Nov. 8.

Baylor still has a shot to make its way into the College Football Playoff but they have to be undefeated to do that.

I am admittedly one of Art Briles’ largest advocates out there and even I don’t think that will happen.

Three of America’s top four teams (Alabama, Oregon and Oklahoma) all lost this weekend. Clearly, there are going to be some teams with losses in the Playoff. We should have all seen that coming anyway.