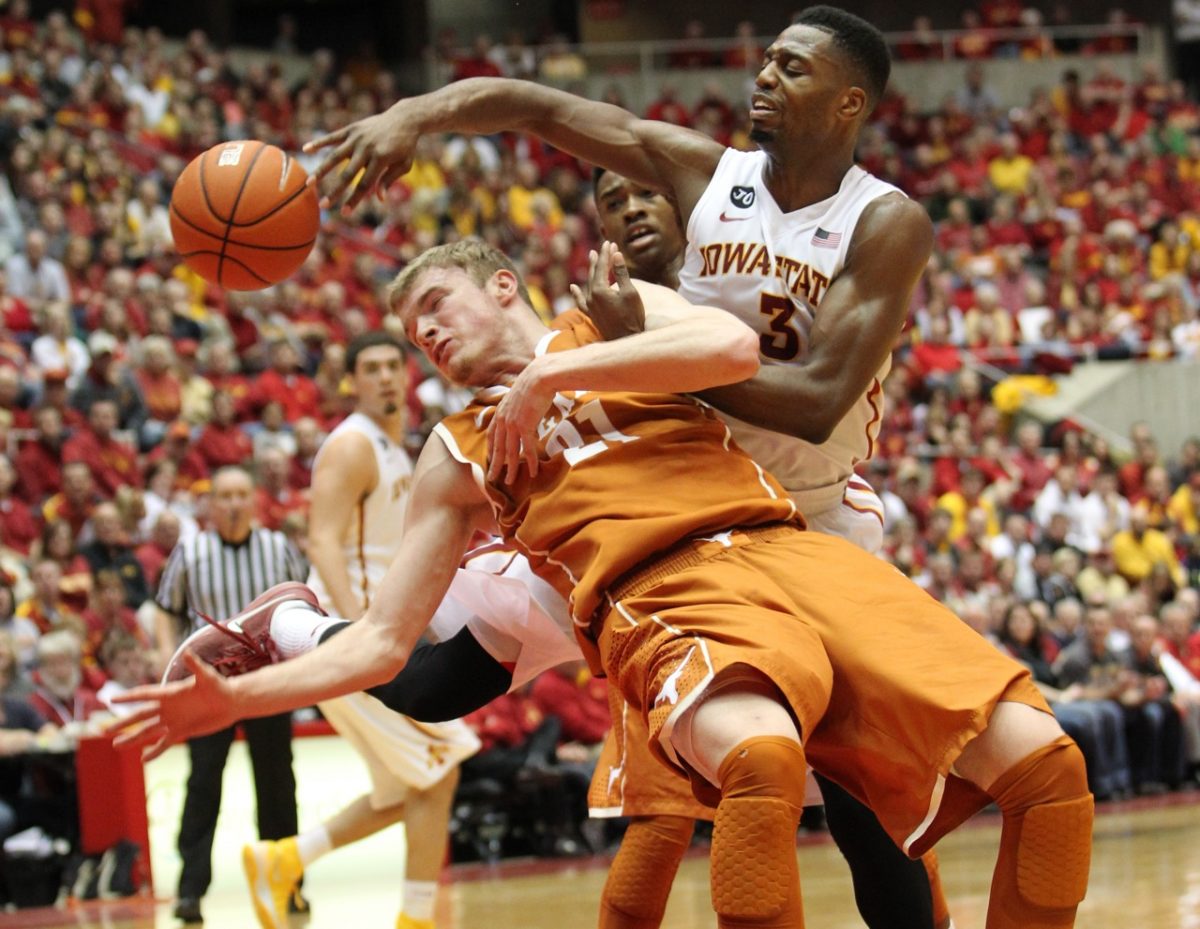 The Big 12 Tournament has all the elements we love in an entertainment event: unpredictability, characters and drama. Throw in the fact the Sprint Center is selling beer at the tourney for the first time since 2005 and we have ourselves a full on Royal Rumble.

If you are reading Cyclone Fanatic, chances are you are aware of the Royal Rumble; the manufactured WWE event in which 30 men enter the square of terror and one survives. Growing up in entertainment-starved Iowa in the ’90’s, the Royal Rumble was a date circled on the calendar every year. I wasn’t a passionate WWE supporter, but you better believe I was locked in every January for the Royal Rumble. My pals and I would spend a week renting VHS tapes of past Royal Rumbles from the local Blockbuster to aptly prepare ourselves. When the Super Nintendo Royal Rumble game debuted in 1993, it was an absolute revelation. Who needed to call girls when you could hop in the ring and control Mr. Perfect whenever you wanted? The ’90’s were clearly a simpler time.

Here we are in 2014 and the Big 12 Tournament has the potential to be as erratic as any Royal Rumble. Seven of the ten Big 12 teams are going to make the NCAA Tournament and West Virginia is on the outside looking in, but capable of a creating chaos in Kansas City. When 80 percent of the league can make an argument to win the Big 12 Tournament, you have yourself a humdinger of a week. So what is going to happen? Let’s head into the ring to find out.

The first four contestants are often afterthoughts in the Royal Rumble. Since the initial WWE event in 1988, only 2 men have won the Rumble as the first wrestler to enter (Shawn Michaels in 1995 and Chris Benoit in 2004.) Likewise, no Big 12 team that has played on the initial day of the tournament has captured the belt. In fact, nobody seeded four or worse has ever won the Big 12 Tournament. But we have ourselves a unique situation in 2014.

The first two wrestlers that enter the ring on Wednesday night are Texas Tech and Oklahoma State. The creators of the event embrace drama by starting off the charade with these two. OSU’s Marcus Smart of course controversially entered the stands in Lubbock in early February. In WWE fashion, he shoved Tech "super-fan" Jeff Orr, causing Smart to be suspended three games. Since returning, Smart and the Cowboys have been excellent, winning four of their final five games to essentially clinch a bid to the NCAA Tournament. Tech has battled all season long with tenacity thanks to their sage orchestrator Tubby Smith, leading the Big 12 in conference games by allowing just 68 points per game. But Tech lasts merely a few seconds in the ring, as Marcus Smart throws them over the top rope, careening onto super-fan Jeff Orr within the first minute of the Rumble. Oklahoma State 72 Texas Tech 55.

The next contestants to enter are Baylor and their charismatic, yet slightly enigmatic manager Scott Drew and TCU. The Rumble always keeps its sense of humor by sending a contestant into the ring with no chance at all to win. Winless TCU is this year’s Doink the Clown. TCU became the first team to not win a game in conference play since Texas A&M in 2004. Everyone has a few laughs and Baylor gently nudges TCU out of the ring. Baylor 81 TCU 57. The Rumble takes a turn for the serious when Iowa State and K-State enter the fray. Comedy has no place when the ultra business like Wildcats enter. They enter the tournament second in the conference in scoring and field goal percentage defense, allowing a paltry 41 percent shooting from opponents. But they are not as feisty away from the Octagon of Doom, going 5-9 in away/neutral court games this year. These two get locked up in a high-level tussle for 38 minutes, but THAT’S DEANDRE KANE’S MUSIC! The Wildcats don’t have enough offense to stay with Kane, who has averaged 21 points, 8 rebounds and 7 assists over his last seven games. Iowa State 73 K-State 68.

Kansas walks out to the Undertaker’s music and everyone stops and stares in awe at the champs.  Not only has Kansas won the last 10 regular season titles, they have won six of the last eight Big 12 Tournaments, including a eviscerating run through the tournament last year, when no team got within 15 points of the Jayhawks. Oklahoma State is not your ordinary 8-seed. Marcus Smart and Markel Brown attack the champs relentlessly, throwing haymaker after haymaker. MY GOD THE CHAMPS ARE TAKING A BEATING.

The Jayhawks and phenoms Andrew Wiggins and Wayne Selden try to respond, but with Joel Embiid unavailable, Smart and Brown continue the onslaught to the rim. The arena is stunned. A Smart shove sends Kansas over the top rope, one foot touches the floor, but they grab hold of the bottom rope just in time. Phil Forte comes sliding in with a kick to the stomach in the waning moments, spiraling Kansas out of the tournament. It is just the 3rd time in the 18 years of the Big 12 that KU is eliminated before the semi-finals. Oklahoma State 77 Kansas 75.

The first game of the Thursday evening session is dominated by the coaches. Oklahoma and Baylor are a contrast in styles. Oklahoma played at the 15th quickest tempo in the nation with a dizzying style of kicks and aerial attacks. Baylor is content to slug it out in the middle of the ring with their hulking interior and 324th ranked tempo. This game is nip and tuck with Oklahoma countering Baylor’s zone with stellar shooting from Buddy Hield, who led the Big 12 in most threes made in conference play with 63. In the final minute, Lon Kruger pulls the classic bait and switch, luring Scott Drew over to the ropes to call a truce. The gullible Drew falls for it and Kruger tosses him over the ropes and onto the floor. Oklahoma 71 Baylor 65.

The night-cap is a physical mismatch. Texas owned West Virginia in both outings this year by dominating the points in the paint (+19 per game) and the rebound battle (+17). The smallish Mountaineers have heart with Juwan Staten and a few guys who are willing to throw a punch, but size does matter in the Rumble. (Shawn Michaels and Rey Mysterio are the only diminutive wrestlers to win it all.)  Even though the Longhorns limp into KC losing four of their last six, they are too big. Texas 77 West Virginia 68.

The semis are all set and only four remain. After playing two classics, Iowa State and Oklahoma State meet again. They get locked up in the corner and the confident Smart and Brown continue their barrage of haymakers carried over from the Kansas game. Iowa State goes to work with Georges Niang, countering with a series of body blows against the spotty Cowboys interior as the announcers gush about Nerlens Noel and the YMCA. The game goes to OT when controversy erupts. Georges Niang clotheslines Marcus Smart who falls to the ground in apparent catastrophic pain. As he is writhing on the ground, Smart reveals a wry smile; he is not actually hurt, but acting.

Niang celebrates his apparent knock out near the ropes. Smart gets off the mat. Nervous energy erupts from the Sprint Center. Smart starts to extend his arms to a oblivious Niang with his patented shove. But from the top rope, OH MY THAT IS NAZ LONG!!! Long launches at the last second and catapults Smart over Niang and onto the floor. Iowa State 87 Oklahoma State 86.

The second semi is not nearly as controversial. Oklahoma has too much offense. Texas’ inconsistent jump-shooting bites them at the wrong time. The Longhorns enter Kansas City as the worst 3-point shooting team in the league at just 30 percent in conference play. Oklahoma meanwhile shot the most threes in the league (24 per game) and made them at the highest rate (38 percent).  Oklahoma breezes past the Longhorns, defeating them for the third time this year. Oklahoma 81 Texas 69.

Just two contestants remain and both employ similar styles, attacks from the top rope are common place. Oklahoma and Iowa State are No. 1 and No. 2 in the conference in threes attempted. The frenetic pace continues into the second half as the game is headed for the high ’80’s. The key match-up emerges in the post where Big 12 player of the year Melvin Ejim engages in a battle royale with the ruthless WWE veteran Ryan Spangler. Ejim and Niang get Spangler in foul trouble which leaves the middle wide open for Iowa State to attack. Kane has a field day going to the rim as Iowa State takes a five point lead late in the 2nd half. But fatigue catches up with the Cyclones. After energy-sapping tussles with K-State and Oklahoma State, the legs start to wane. Buddy Hield delivers a few flying elbows to stun Iowa State. Everyone is exhausted.

Who knows what will actually happen in Kansas City, but it is guaranteed to be a wild time in the nation’s best conference. Let’s get ready to rumble. 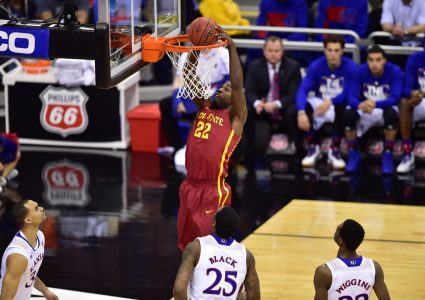