AMES – Was the outcome ever really in doubt?

During a season in which nothing has gone right, Iowa State’s 21-17 loss to Texas Christian is just the latest kick to the midsection.

“I wish I could put into words the pain that’s associated with a loss like this,” Iowa State coach Paul Rhoads said.

The most gut-wrenching part for Cyclone fans is the way it happened. Needing one first down to seal a hard-fought 17-14 victory, Iowa State couldn’t convert on a 3rd-and-6 with under three minutes left.

“It’s just like somebody knocking the wind out of you and trying to catching your breath and getting ready for the next play,” linebacker Jeremiah George said. “It sucks.”

George and the Cyclones defense did its part for most the afternoon. The offense let Iowa State down again on Saturday.

Against the Horned Frogs, the Cyclones had only 283 yards of offense and scored 10 points. The unit lacked rhythm and the use of quarterbacks Grant Rohach and Sam Richardson was perplexing to say the least.

Rohach made his first career start, but he and Richardson rotated in and out at odd times.

“You handle it as best you can,” Rohach said. “I have full confidence Sam’s going to run the offense efficiently and my confidence in myself and the guys around me can run it efficiently.”

Richardson was clearly hampered with a thumb injury that affected his throwing, yet who had the ball in his hands on the critical 3rd-and-6 needing to make a throw for the first down and win?

You guessed it. Richardson’s pass – his only attempt of the game – was knocked down at the line of scrimmage.

The questionable play-calling led to another heartbreaking defeat for the Cyclones.

“I’ve had this feeling a couple of times this year,” George said. “I get up, I brush myself off and I brush my teammates off and get ready for the next opponent.”

Despite the sour defeat, the defense played one of its best games of the season. Iowa State gave up 21 points and 368 yards, but most importantly, Wally Burnham’s unit gave the Cyclones a chance to win their first Big 12 game.

“I thought we played pretty much lights out except for the last drive,” Deon Broomfield said. “We created turnovers, which we haven’t been doing lately, and we had three and outs.”

The defensive improvement was highlighted by the play of Jevohn Miller. In the season opener, Miller was pulled after one quarter against Northern Iowa.

On Saturday, he was constantly in on plays, finishing with eight tackles. His biggest contribution came in the fourth quarter.

Miller drilled a TCU wide receiver right as he was catching a pass. The ball was deflected right into the waiting arms of George.

Paul Rhoads on his team’s effort

“I’ve got a team that played with phenomenal emotion today and I’m very grateful to them.”

Grant Rohach on E.J. Bibbs, who finished with a team-high seven catches for 63 yards.

“Bibbs is an outstanding football player. We want the ball in his hands.”

–       Kirby Van Der Kamp completed a 25-yard pass to Justin Coleman on a fake punt. The trick play ended up leading to a 15-yard Sam Richardson TD run. Van Der Kamp is now 2-for-2 punting in his career for 50 yards.

–       Cory Morrissey notched the first sack of his career. 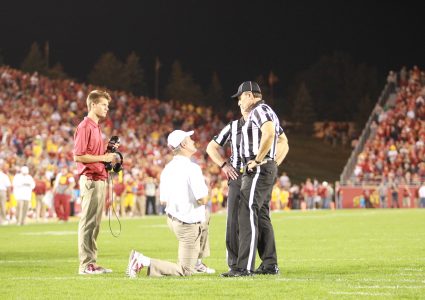