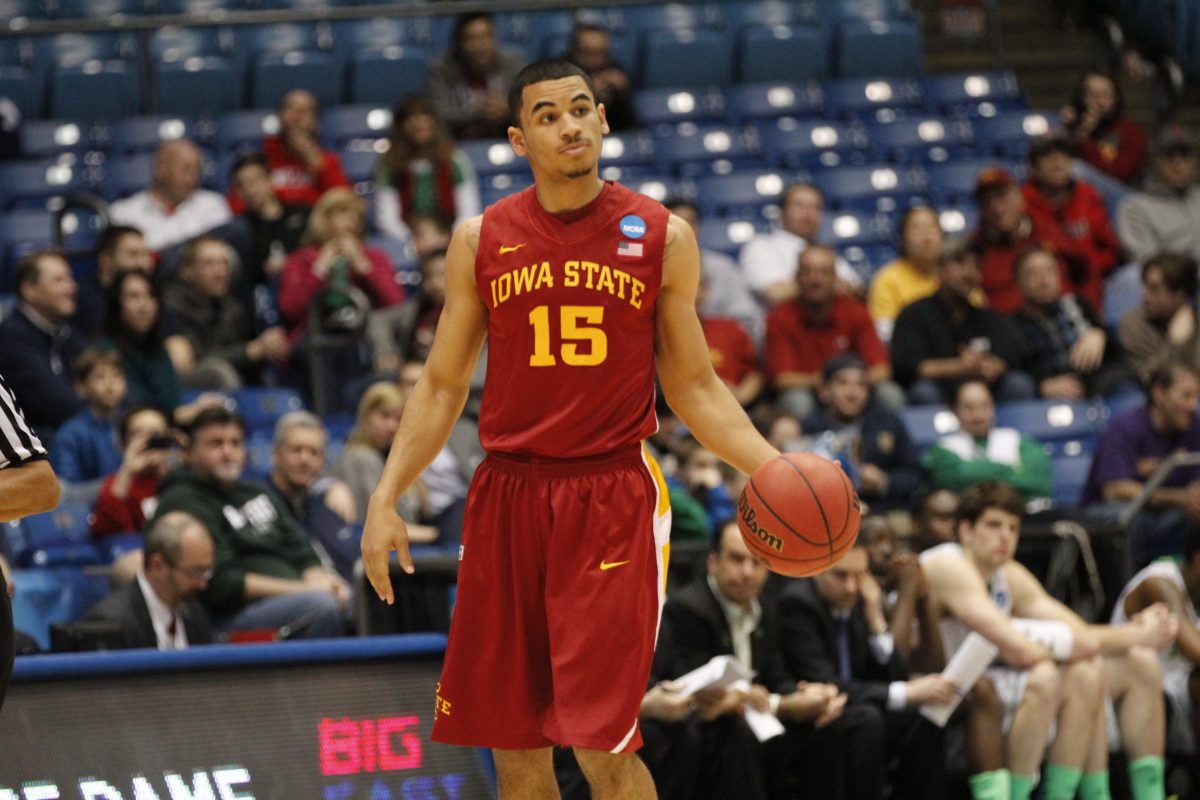 AMES — If you walked into a sold out Hilton Coliseum on Sunday afternoon anticipating a 26-point scoring outburst from Iowa State sophomore Naz Long, then please, share what you had for breakfast with the rest of us.

Long, who only netted five 3-pointers during his entire freshman campaign, went 8-for-11 from long range and led Iowa State to a commanding 95-62 season-opening win over UNC-Wilmington.

“That is something that Coach Hoiberg always instills in us,” Long said after the game. “If you are feeling it, step up and knock it down.”

Long shattered his previous career-high in points, which was seven. He was two 3-pointers away from tying Iowa State’s individual record that is held by Lucca Staiger, who netted 10 against Drake in 2009.

That’s not bad for a guy who was previously known for character, hustle and defense. On Sunday, Long, who is only in the starting lineup because of Melvin Ejim’s knee injury, proved that he is capable of being more than that.

Hoiberg isn’t the only Cyclone who had previously noticed Long’s emergence on the practice floor. DeAndre Kane, who was three assists away from a triple-double (13 points and 11 rebounds), challenged Long last week in practice.

“I told him he has to hit at least five this game,” Kane said. “He knocked them down. He shot the ball great for us.”

It was a career day for perhaps the hardest worker on Hoiberg’s roster.

So what happens when Ejim returns to the lineup? Don’t worry. Though he might not start, Kobe, I mean Nazzy, isn’t going anywhere.

“He will still play a huge role for us,” Hoiberg said. “The thing I was most impressed with Naz tonight, sure he shot the heck out of it, but just our game plan with him plugging gaps and filling holes and guarding a guy who wasn’t a threat outside of the 3-point line. He was all over the place defensively. That’s one thing that I know will be a constant with Naz. He is going to get after it on the defensive end.”

“I feel like if I don’t put the work in then the work is not going to come out. I have stayed in the gym. I am always going to stay in the gym regardless if I play good or if I play terrible. It’s always something that I am going to do.”

Five in double figures – For the 10th time in Fred Hoiberg’s coaching career, five Cyclones finished Sunday’s opener in double-figures. Of course, Long led the way with 26. Georges Niang, who only played six minutes in the first half due to foul trouble, had 16. Kane had 13 while Matt Thomas and Dustin Hogue had 10 a piece.

The stat-stuffer – As noted above, DeAndre Kane was only three assists away from a triple-double. Had Hoiberg not gone to the bench as early in the second half, that milestone likely would have occurred. Kane grabbed 10 rebounds in last week’s exhibition and along with 11 on Sunday.

Edozie – Hoiberg is obviously searching for a big man to snag a few rebounds and collect a few fouls while Ejim is out. Daniel Edozie, who out-performed Percy Gibson on Sunday, just might be that guy. The JUCO transfer had six rebounds (with four points) in 16 minutes of play. He isn’t much of a threat to score, but Edozie’s motor is always turning and his 6-foot-8, 245-pound frame is formidable.

Four-guard lineup – With Niang and Hogue both out of the game due to foul trouble, Hoiberg was forced to go to a four-guard (Monte Morris, Thomas, Sherron Dorsey-Walker, Kane and Gibson) lineup midway through the first half. UNCW went on a rare 9-2 run over the next three minutes of play.

Foul trouble – This is the issue with Melvin Ejim being unavailable. Hoiberg is very limited when it comes to big men, especially if Niang picks up early fouls like he did on Sunday. Obviously Iowa State was able to overcome this against UNCW, but next week’s date with Michigan could tell a different story.

UNCW – The Seahawks aren’t very good. UNCW lost to the University of Iowa in Friday’s season-opener by an 82-39 final. Expect Iowa State’s competition to be ratcheted up slightly on Tuesday night when Texas A&M Corpus Christi comes to town. The Islanders won their season-opener on Friday over Huston-Tillotson 79-45 and were picked to finish seventh in the Southland Conference.