The first and second rounds will take place between March 22-25 and final dates and times will be determined during the committee meetings taking place October 21-23.

"We are grateful to have been selected to host the women’s basketball first and second rounds, bringing this prestigious event back to Hilton Coliseum,” Senior Associate Athletics Director Calli Sanders said. “We look forward to showcasing our women’s basketball program, fervent fan base and Iowa State University again on this national stage."

The first and second rounds will remain a four-team format. Like the 2012 tournament, if Iowa State is awarded a berth in the NCAA Championship, it will be guaranteed to play at its host site.

“We are honored to again be chosen as a host site for the NCAA first and second round,” head coach Bill Fennelly said. “The committee is well aware of the passionate fan base Iowa State has for women’s basketball.  They also know our athletic department and the City of Ames will host a great event for the teams and their fans.”

Iowa State has hosted the NCAA Tournament at Hilton Coliseum on seven different occasions, most recently in 2011-12 when the Cyclones fell to 10th-ranked Green Bay. In 2009-10 the Cyclones topped Lehigh and Green Bay, punching a ticket to the Sweet Sixteen.

Iowa State has ranked in the top-10 nationally in attendance in every year since 1999-2000, including ranking second-nationally last season, marking a program-best. The Cyclones finished behind only Tennessee last season with an average of 9,970 fans per game. 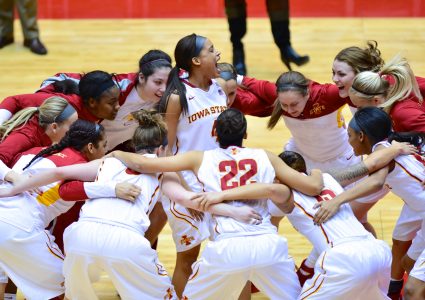