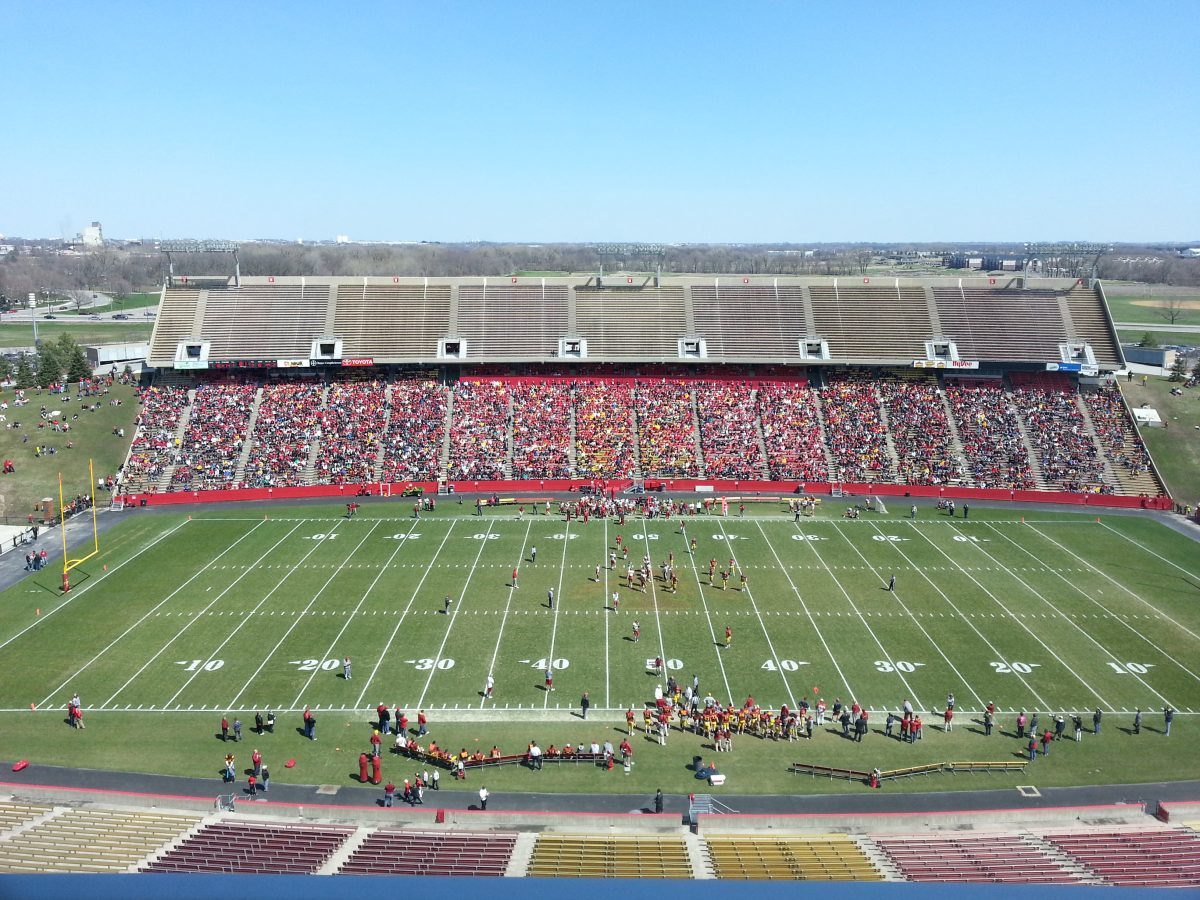 AMES — The largest Iowa State spring game crowd that I’ve ever seen turned out to Jack Trice Stadium on Saturday afternoon and Paul Rhoads showed off his group of young Cyclones.

If you care, the Cardinal beat the Gold by a 35-27 final (which is extremely irrelevant by the way). Stay tuned to Cyclone Fanatic later on tonight for Ian Smith’s in-depth report on who did what. Until then, here are some raw notes that I took during the actual scrimmage.

*** I’ll start with the quarterbacks.

Neither Sam Richardson nor Grant Rohach stood out to me as the second coming of John Elway during this one but don’t take that as me being crazy critical of the guys either.

I want to preface all of this by saying that I am a firm believer that spring games aren’t really made for quarterbacks. The defense won’t admit it (nor should they), but they somewhat know what is coming after weeks of spring drills right? That is my belief anyways.

Richardson started off slow. He was all over the place and looked as uncomfortable as me at the ballet. Sam wasn’t patient in the pocket and threw a really bad interception to Willie Scott on the sideline. However, he did get better as the day went on, which was encouraging. He’s an effective runner but I fear that he runs too much, which could result in an injury or two during the season.

Rohach was about what I expected him to be – a young guy with a crazy strong arm that made quite a few mistakes. However, it was obvious that the nuts and bolts are there. He has a cannon. He can run. He is a leader. No. 3 has a bright future.

Afterwards, Rhoads said that he is very comfortable with his quarterbacks entering 2013 and for the most part, I agree with him.

*** I wrote this in my preview earlier this week and it turned out to be true (we all get lucky every once in a while). Do not sleep on DeVondrick Nealy at running back. JuCo transfer Aaron Wimberly got a lot of love this spring (and rightfully so, more on him later) but to anybody in attendance, Nealy clearly stood out as “the guy” at running back for Iowa State right now.

Ask me to name a starting running back right now and I’m going with DeVondrick Nealy, who averaged 8.8 yards per carry while running for the Gold in the scrimmage.

*** Aaron Wimberly looked good too. His modest stats from the day won’t pop out at you but Wimberly showed glimpses of being the player Iowa State needs him to be next season. He is a guy that hits the hole and has a ridiculous amount of speed to get up the field in a hurry.

*** For what it is worth, Rhoads called Iowa State’s running backs the best group of the spring in his post scrimmage press conference.

*** I liked what I saw from sophomore wide receiver Quenton Bundrage. As mentioned above, the quarterbacks did struggled but we saw "Q" create plays with his legs a couple of times, like a jailbreak screen that he took for nearly 40 yards early in the scrimmage. He desperately needs to be that guy in 2013 because if I’m being honest with you (which I always am of course), I don’t see another Cyclone capable of it at this point in time. There’s a lot of talent there but Bundrage is clearly head and shoulders above the rest at wide receiver right now. The pressure is on for him to have a big year.

*** During spring ball last year, former quarterback Austen Arnaud told me about a wide receiver named Justin Coleman that was going to contribute for the Cyclones. No. 4 was a year late but his prediction is likely going to come true in 2013. Paul Rhoads hyped the walk-on and former UNO Maverick earlier in the spring and Coleman backed up the talk with a 31-yard touchdown reception from Sam Richardson in the first half. Coleman doesn’t bring the explosiveness to the table but he could be that Jake Williams/security blanket type of wide receiver for Richardson, who clearly has confidence in him. Plus he can block, a trait that is important to Courtney Messingham.

*** I’ve never been a big zone-read guy but I will say that it looks a heck of a lot better out of the “Pistol” than what we’ve seen in previous years.

*** Speaking of the “Pistol,” fans in attendance saw it early, often and pretty much all of the time during the scrimmage.

*** Late in the scrimmage, Iowa State ran a split backfield of Wimberly and Jeff Woody. That gave Grant Rohach all sorts of options and as a result, the Cyclones moved the ball right down the field. This is something I anticipate we will see more of in 2013 than every before.

I spoke to Nealy after the game who told me to expect a lot of this in the fall, which makes a ton of sense considering Iowa State is deep at running back and not so much at wide out.

*** Prediction: Jeremiah George will be a first-team All-Big 12 linebacker next fall. The dude’s tackle numbers are going to be off the charts with an inexperienced defensive line in front of him.

*** The addition of Rodney Coe should make a fairly significant difference in Iowa State’s defensive line come this fall, David Irving as well. If that does happen to be the case, I’m not freaking out about Iowa State’s defensive starters right now. But man, the difference between the first team defense and the second team is night and day. Night and day. It isn’t even close. Not. Even. Close.

*** Not all was bad on the second string defense. Redshirt freshman linebacker Luke Knott looked extremely athletic. In fact I wouldn’t be surprised if he sees some playing time against some of those spread you out Big 12 offenses next fall. In addition to Luke, Darius White and Kane Seeley have serious potential too. That could be a fun group to watch in two years if it stays in tact.

*** Redshirt freshman Charlie Rogers picked off Grant Rohach early in the scrimmage. Get used to that fanatics. This kid is going to be good. Here’s another guy who could see the field next season based off of his 6-foot-1, 202 pound frame alone.

My overall impression of what I saw can be summed up with one word.

On both sides of the ball at pretty much every position, Iowa State seems to have more of it. I was glad to hear my friend Ben Bruns say that same thing on the Cyclone Radio Network’s broadcast of the event.

That is what I took away from the 2013 spring game the most.

I’ll write a lot more about the spring next week and look forward to one-on-one videos with some key Cyclones as well.