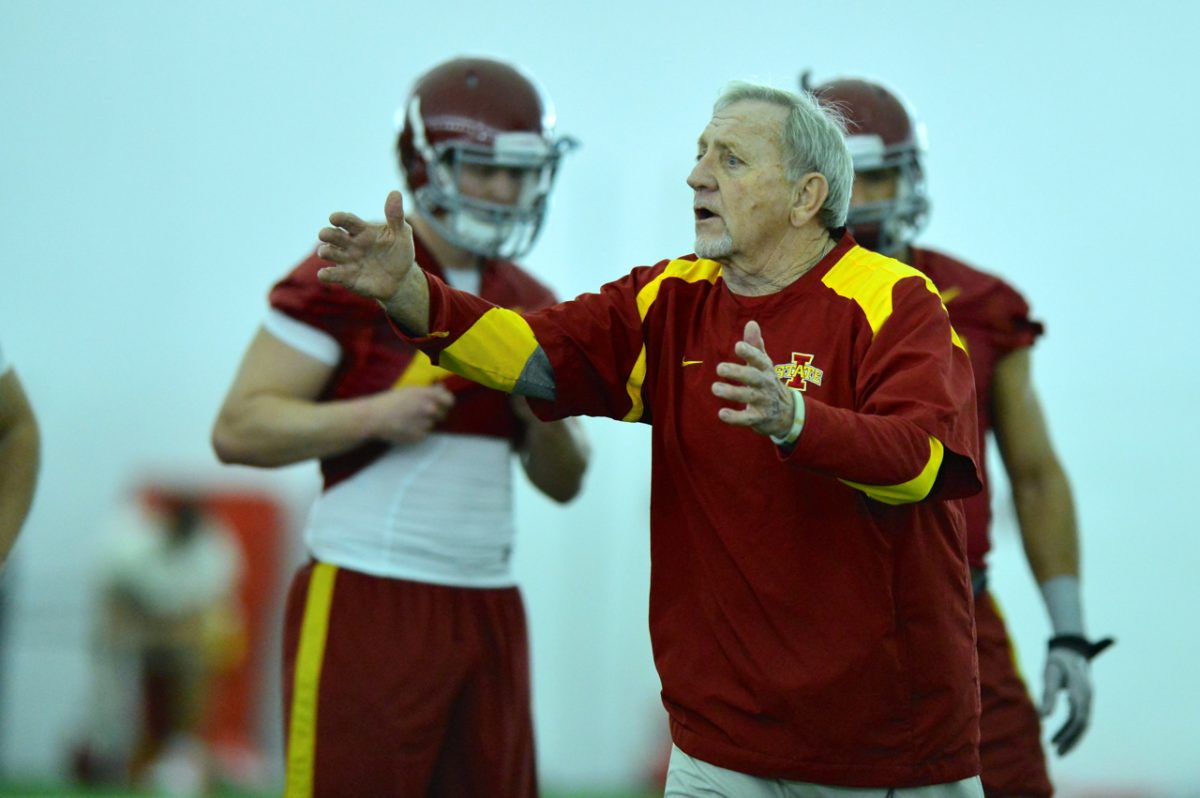 AMES — As generally is the case when it comes to spring football, Iowa State’s defense appears to be catching up. That was the story coming out of the second scrimmage of the spring that took place Saturday morning in Jack Trice Stadium at least.

“The defense practiced and played faster this week,” said head coach Paul Rhoads. “It was a little bit like pitching and hitting. Who is ahead and who catches up? The defense in this third week is back up a little bit. That is probably as enjoyable to see as the cutback in the number of big plays that the offense is getting.”

Iowa State’s youthful defense was far from dominating but the first string has definitely made some progress over the last two weeks – specifically the position group that was quite possibly the biggest question mark on the entire roster heading into the spring – the Jake Knott and A.J. Klein-less linebackers.

“I think the first group is showing that they are capable of playing at this level,” said Rhoads. “Jared Brackens has probably been the biggest surprise in a positive on the entire roster this spring, especially for a guy who made a position move.”

Brackens, a junior, spent the first two seasons of his career at strong safety where he played sparingly.

You would expect him to grow up as a junior and play better,” said Rhoads. “But to play as well as he is playing at a position that he hasn’t played is very encouraging for us.”

Jevohn Miller, Iowa State’s No. 1 WILL linebacker, has been a bright spot all spring long as well. Defensive coordinator Wally Burnham praised Miller after last week’s scrimmage and Rhoads did the same today. Apparently senior Jeremiah George’s game has seen a spike in productivity as well.

When a defense is as young as Iowa State’s is, the issue that coaches often see is too much thinking and not enough reacting. According to the veteran coordinator Burnham, he saw less of that over the last seven days, hence the spike in productivity.

He once was a walk-on. Then he was a running back. Now senior Jeff Woody is a guy who can do it all.

According to offensive coordinator Courtney Messingham, Woody will be lined up all over the field for Iowa State this fall.

The move makes sense considering Iowa State’s backfield is full of guys who fit the “true tailback” mold more than Woody and his 6-foot-1, 242-pound frame.

Sophomore wide receiver Tad Ecby missed his second scrimmage in a row due to a hamstring injury.

In addition to Ecby, sophomore cornerback Kenneth Lynn missed Saturday’s scrimmage due to an ankle injury.

Also, Rhoads announced that junior offensive guard Shaban Dika’s career has come to and end due to multiple knee injuries. CLICK HERE to read more on that story.

*** Courtney Messingham’s overall assessment of his offense on Saturday…

“I saw a bunch of guys playing hard but not really playing smart and that’s what we’ve got to focus on like I talked about last week, as a unit playing together and playing smart. For the last four practices, we’ve really got to understand the why.”

*** Rhoads mentioned redshirt freshmen defensive backs Charles Rogers and Damien Lawry as guys who are “showing flashes” of being really good. Rogers is playing at corner and nickel back this spring for the Cyclones.

“We are utilizing it more. There are certain components of it that we have fine-tuned with Coach Klenakis coming aboard. I am happy with that component.”

“Not very good today, limited though in what we did,” said Rhoads. “We did pooch punts for the first time all spring and did not hit those particularly well today. I only had one out of the five that I would have been satisfied with and the kickers were inconsistent. I don’t think they really came to work today to be quite honest with you.”