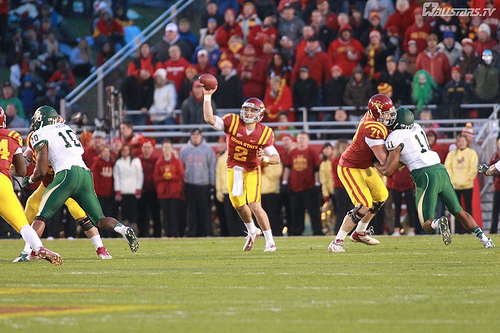 AMES – Armed with a plethora of playmakers, Landry Jones mimicked a maestro.

The Oklahoma quarterback directed the Sooners’ offense up and down the field on Saturday, beating up Iowa State, 35-20.

“That football team is full of men,” Iowa State coach Paul Rhoads said. “That’s a big football team every position you want to look at.”

The Cyclones did their best to stay with the explosive Sooners, but the defense wore out midway through the third quarter. Oklahoma scored touchdowns on its first three possessions after halftime to break the game open.

Give most of the credit to the precision of Jones. After a pair of second quarter interceptions, Jones flashed pinpoint accuracy. The senior finished 32-of-45 for 405 yards and four touchdowns.

“They were very fast paced,” defensive tackle Jake McDonough said. “Their quarterback was on point all game. They came to play.”

The offensive onslaught started just before the break. Leading 7-6, the Sooners appeared to be running out the clock until they picked up a first down with under a minute left. Then they let Jones operate.

First, he found Justin Brown on the right sideline for a 40-yard gain. On the next play, Jones lofted a perfect pass to Kenny Stills for a 20-yard touchdown and a 14-6 advantage.

“(Jones) was really good, especially playing away from home and against a team that has player really good defense,” Oklahoma coach Bob Stoops said.

The Sooners continued to move the ball after halftime, taking the first possession 75 yards on 14 plays for the touchdown. Jones again capped the drive with a 20-yard strike, this one to Brown.

Iowa State answered with a touchdown of its own, but it wouldn’t be enough. Oklahoma scored touchdowns on its next two possessions to make it 35-13 and put the game out of reach.

“They had a great scheme and they made passes when they needed too,” linebacker A.J. Klein said.

Especially on third down. When it looked like the Cyclones would finally get off the field, the Sooners would convert another third down. Oklahoma finished 9-of-14 on third downs on Saturday.

“Third down was a big factor in the outcome of this ballgame,” Rhoads said. “We couldn’t get them off the field and we couldn’t stay on the field.”

Iowa State quarterback Steele Jantz played well in spots on Saturday, but he didn’t get much help from his receivers. For the second consecutive game, the Cyclones’ wide outs had a case of the drops.

Jantz finished the game 20-of-40 for 191 yards, but those numbers should have been better.

“We left the field knowing we could have done better than we did,” wide receiver Quenton Brundrage said.

The loss dropped Iowa State to 5-4 this season and one game shy of bowl eligibility. The Cyclones travel to Texas next weekend.

Durrell Givens has a knack for finding the football. When the Iowa State defense creates a turnover, Givens seems to have a hand in it most of the time.

On Saturday, Givens picked off two Landry Jones passes in the second quarter to help Iowa State stay close with the Sooners.

Givens first pick was particularly impressive. Jones tried to go deep, but Givens read the play and stepped into front of the throw, returning it to the 15-yard line.

“The first (interception) was a big time play,” Rhoads said.

Givens was in the right spot on the second interception. Jeremiah George tipped a Jones pass into the air and Givens was there to take it away.

Jeremiah George had big shoes to fill on Saturday. The linebacker was trying to help replace Jake Knott.

George responded with maybe his best game of the season. The junior finished with a career-high 17 tackles.

In a Big 12 slugfest, special teams can be the difference between winning and losing. Iowa State tried to make that the case on Saturday.

Arceo drilled a pair of field goals in the first half against the Sooners, including a career-long 51-yard boot.

“It helps a lot that Coach Rhoads showed confidence in me,” Arceo said.

Forgive Paul Rhoads for not getting too excited about the field goals. The fourth-year coach wanted touchdowns.

“I told (Jones) after the game that I was glad he was graduating because he is a heck of a football player.”

Rhoads on his team’s mindset heading into the game

“We expected to win this football game. That’s how we prepared and that’s how we came into Jack Trice Stadium today.”

–       Official attendance on Saturday was 56,585. It was the third largest crowd in Jack Trice Stadium history.

–       Oklahoma running back Brennan Clay tallied 157 yards on the ground, including a third quarter touchdown. 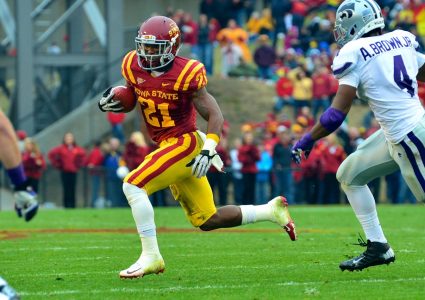