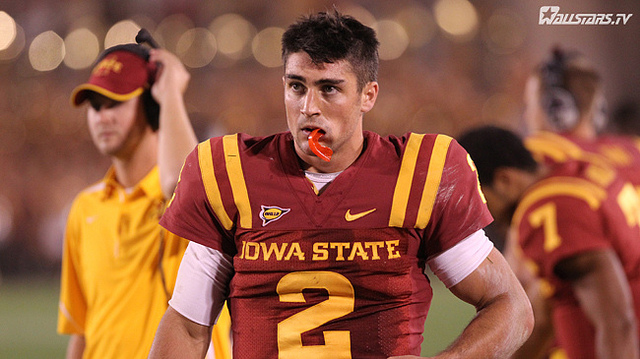 The surging Texas Longhorns physically dominated Iowa State on Saturday in route to a 33-7 win over the Cyclones. Texas racked up 607 total yards in the game compared to only 277 by Iowa State. That statistic pretty much tells the story.

What went right? What went wrong? Here’s your recap.

Next two weeks – This is going to be hard for some of you to comprehend and I completely understand why – but Iowa State still has a decent chance to go 7-5 on the season. In fact, Iowa State has a chance to be favored in its final two games of 2012 (although I’d say both of the two upcoming games look more like PICKS to me depending on what goes down the rest of this weekend and also next of course).

Last week’s loss was to a very good Oklahoma team. Texas is currently playing like a top 15 team. The Longhorns have finally gotten all of those blue chippers to play as one. All of Iowa State’s five losses are to teams it wasn’t supposed to beat.

Before you roll your eyes and tell me to quit being a homer, remember that this is "Three Up." I’ll get to Saturday’s issues in a moment.

The silver lining is that the playing field will be leveled in each of the next two weeks.

Having said that, I’ve been high on Kansas all year from the standpoint that they are not an easy out. The Jayhawks might be winless in the Big 12 but they’ve taken TCU, Oklahoma State and Texas all to the wire at home. Kansas took Texas Tech to double-overtime in Lubbock on Saturday. This team is due to win and has Iowa State circled on its schedule.

And then there’s West Virginia…I’d feel a lot better about that game if Jake Knott and Jansen Watson were healthy for Iowa State of course. Still, it’s a home game against one of the worst defenses in college football.

Things are looking down right now but keep your head up. Iowa State has two very winnable games in front of it the next two weeks. The Cyclones are still in a position to win seven games, which any of you would have taken back in August.

Running game – Slowly, Iowa State’s running game is improving. It’s hard to be too positive about anything within the Iowa State offense right now considering the circumstances but the Cyclones did average 4.6 yards per rush in the loss. One can only assume that the reason why the Cyclones didn’t try to run the ball more is because they got down early.

Shontrelle Johnson averaged 6.3 yards per carry on nine attempts to total 57 yards. James White looked as healthy as he’s been in weeks tallying 48 yards on 13 carries.

I’m still not sure why Jeff Woody isn’t getting more carries. Iowa State’s big man only got the ball one time in Saturday’s loss against Texas’ 104th ranked rush defense.

Missing Jake Knott and Jansen Watson – This was evident last week but even more clear today. One of the things that made Knott so special was the fact that he always seemed to clean up other people’s mistakes. The opposition picked up seven yards quite often instead of 13 when Knott was in the game. Not only is Knott absent physically for the Cyclones but his leadership is missed as well.

And then there’s junior cornerback Jansen Watson, whose value has never been higher after watching Oklahoma and Texas pick apart his replacements.

Texas quarterback David Ash had a field day vs. Iowa State’s secondary. Ash, who is as underrated of a quarterback as there is in this league, completed his first 11 pass attempts on the day. Ash ended the day going 25-for-31 for 364 yards and two touchdowns. Note that several Texas wide receivers dropped passes on the day too so Ash’ completion percentage should have actually been higher.

Texas had twice as many first downs as Iowa State, 31 to 15.

Jantz only threw two interceptions, one of them coming in desperation mode. The other, a careless lob in the second quarter, was critical in crushing some Iowa State momentum as the team was trying to get back in the game.

Nobody – There isn’t one guy who stands out to me here. I’m not even trying to be pessimistic with this analysis either. I’d think that most in the locker room would agree with my final conclusion.

I mean, the offense totaled 277 yards…The defense gave up over 600. Add that together and you get a 26 point loss. No game ball today.

Quenton Bundrage – This redshirt freshman wide receiver scored the first touchdown of his career on Saturday. Bundrage led Iowa State with three receptions for 20 yards in the loss.

David Irving – This sophomore defensive end blocked a Texas field goal early in the second quarter that really shifted the game’s momentum. He also made an all-man play early in the third quarter too.

Jeremiah George – I’m not sure how well he’ll grade out but he was all over the place, recording 10 tackles along the way.

Jeremy Reeves – Put forth a solid effort from a coverage standpoint.

A.J. Klein – Here’s a guy who is feeling the loss of Jake Knott. Klein played his butt off in the loss. He was spread all over the field. He’s still playing good football but at a new position, things are different without his bash brother. 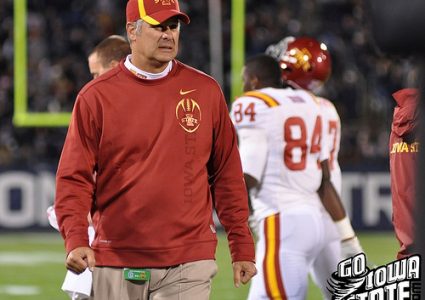