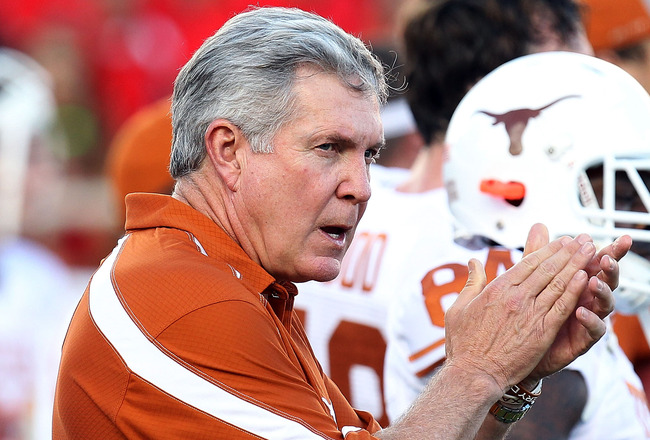 As goes the quarterback of the Texas Longhorns, so goes the team.

Under Vince Young, they won a national title. Under Colt McCoy, they won 45 games in four years. In the two years since Colt’s graduation, the team has sputtered going a combined 13-12. Entering the 2012 season, sophomore David Ash looks like he’ll be the team’s starter. After beginning last year as the fourth string quarterback, the transfer of two players above him on the depth chart opened an opportunity for Ash to split time with Case McCoy at quarterback. At times, Ash’s inexperience showed, as he completed just 56 percent of his passes with eight getting picked off by opponents and only four going for touchdowns. But the staff loves Ash’s size, athleticism and arm. After a full off season taking snaps with the first team, he should look much more comfortable. If Ash experiences success early in the season and builds up some confidence he’ll be a completely different player and develop the passing attack to levels Longhorn fans haven’t seen recently. As of now, he is still a true sophomore quarterback and a work in progress.

At running back, the Longhorns are content to work in multiple backs to take advantage of their great depth at the position. They’ll start by pounding away with their two gigantic sophomore backs, Malcolm Brown and Joe Bergeron. Brown got more usage last year as he bruised his way to 742 yards and five touchdowns, while Bergeron finished with 474 yards and five scores as well. Both are absolute pinballs with the ball in their hands, bouncing off defenders and picking up a ton of yards after contact.

Texas also seems intent on continuing the use of various Wildcat packages that were so effective last year with now departed Fozzy Whitaker. Incoming freshman Jonathan Gray will handle the Wildcat responsibilities as well as working in more of the single back, zone run concepts. The final running back that should find time on the field due to his versatility is DJ Monroe. Monroe is as good a receiver out of the backfield as he is taking a handoff and he’ll likely see some time on returns as well.

There might not be a more versatile player in the Big 12 than sophomore wide receiver Jaxon Shipley. For the majority of last season, Shipley was the team’s leading receiver (a November injury against Kansas caused him to miss the final three games) but he also keyed some Wildcat plays, returned punts, and was 4-4 passing with three touchdowns. Longhorn fans are expecting huge things from Shipley this fall and it seems anything less than 1,000 yards would be disappointing. Across the field from Shipley will be Mike Davis, a big, athletic wide out who had a disappointing sophomore season despite leading the team in receiving yardage. The junior was said to have a good off season despite no catches in the spring game, and he still isn’t close to maxing out his enormous potential. When the Longhorns go to three receiver sets Marquise Goodwin will take the field. Goodwin is a special athlete who recently competed in the London Olympics in the long jump, where he placed 10th after winning the U.S. trials. Last year, he didn’t even join the team until a couple of weeks into the season and still caught 33 balls. The ability to focus on football earlier this season should mean nothing but great things for Goodwin and the Longhorns.

Senior D.J. Grant will be featured at tight end. Grant is a big target who the quarterbacks have used as a security blanket on third downs and in the red zone, and he tied Shipley for the team lead with three touchdown grabs.

Four members of the 2011 starting offensive line will return for Texas, as the only departure will be left guard David Snow. It’s still a young group as none of the returning starters – left tackle Josh Cochran, center Dominic Espinosa, right guard Mason Walters, and right tackle Trey Hopkins – are seniors, meaning the core of a group that paced the nation’s 21st ranked rushing attack will likely be on campus for two more years. Even with four starters back the best lineman on the field for Texas will almost certainly be former Northwest Mississippi C.C. left tackle Donald Hawkins. The athletic behemoth quickly played his way into the starting lineup and has enabled the coaches to move Cochran over to right tackle and Hopkins to left guard, a much more natural position for both. The main backup on the interior is Sedrick Flower while Luke Poehlmann is the top reserve tackle.

The defensive line brings back three starters including both ends in Alex Okafor and Jackson Jeffcoat. Okafor and Jeffcoat were a force to be reckoned with last season as they combined for 35 tackles for loss, 15 sacks and over 120 tackles. The lone new starter looks to be defensive tackle Brandon Moore, a transfer who built a lot of hype with a good spring performance. Moore is likely to start alongside Ashton Dorsey and Desmond Jackson won’t be much of a drop off when he comes in to back either up.

Linebacker is a much different story from the defensive line. Linebacker has the least amount of returning experience and depth of any spot on the roster, as last year’s top two tacklers both vacate their starting positions due to graduation. Jordan Hicks is now the veteran of the group as the only returning starter. Big sophomore Steve Edmond (6-foot-3, 255) is a strong blitzer and excellent against the run, but still needs some work in defending against the pass. Junior Demarco Cobbs will fill the role of strong side linebacker, an area that calls for a lot of speed and the ability to play in space, a specialty of Cobbs.

The secondary features a pair of outstanding young corners in sophomore Quandre Diggs and Carrington Byndom. Diggs burst onto the scene as a freshman, intercepting four passes and disrupting another 15 in effectively staking his claim to a starting spot for the next several years. Byndom was productive as well, picking off a pair of passes and knocking 15 more to the ground. Kenny Vaccaro has played as both a strong safety and a nickel back and has been effective in both instances. He finished last year as the Longhorns’ third leading tackler and also put together two interceptions and two sacks. Adrian Phillips, a junior, is the final projected starter, although he is still recovering from a shoulder injury. Phillips came to Texas as a corner, making him extremely valuable as he possesses the ability to roll down and man up against a slot receiver. When the team goes to five defensive backs Josh Turner will be brought in as a nickel corner.

The special teams unit picked up a nice boost this July as former Penn State kicker/punter Anthony Fera decided to transfer to Austin. Fera, a junior, will be available immediately. Last season he went 14-for-17 on field goals, perfect on extra points and averaged 42 yards per punt. Both Diggs and Shipley will perform return duties as well as Monroe and possibly Gray. Diggs was excellent on punt returns, averaging 20 yards gained on his nine attempts.

Talent is never an issue for Texas, but consistent team play has been for the last couple of seasons. They flat out need better play from the quarterback position. The strength of the offensive line and the running backs gives them the ability to control the pace of the game and physically overwhelm their opponents, while elite play from the defensive ends and secondary helps the hold a lead once they’ve established it. The biggest issue for the team will be playing from behind – the quarterback’s inability to disperse the ball to skill players keeps the offense from explosively piling up points and competing in shootouts, putting a lot of pressure on the defense. Although the team will be improved as a whole they remain vulnerable, especially when they fall behind early and have to turn to the passing game. 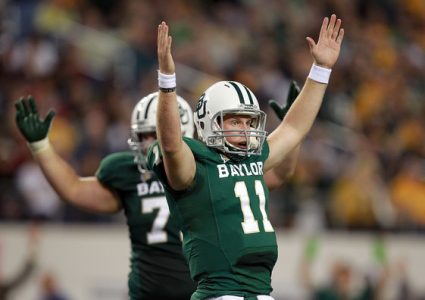