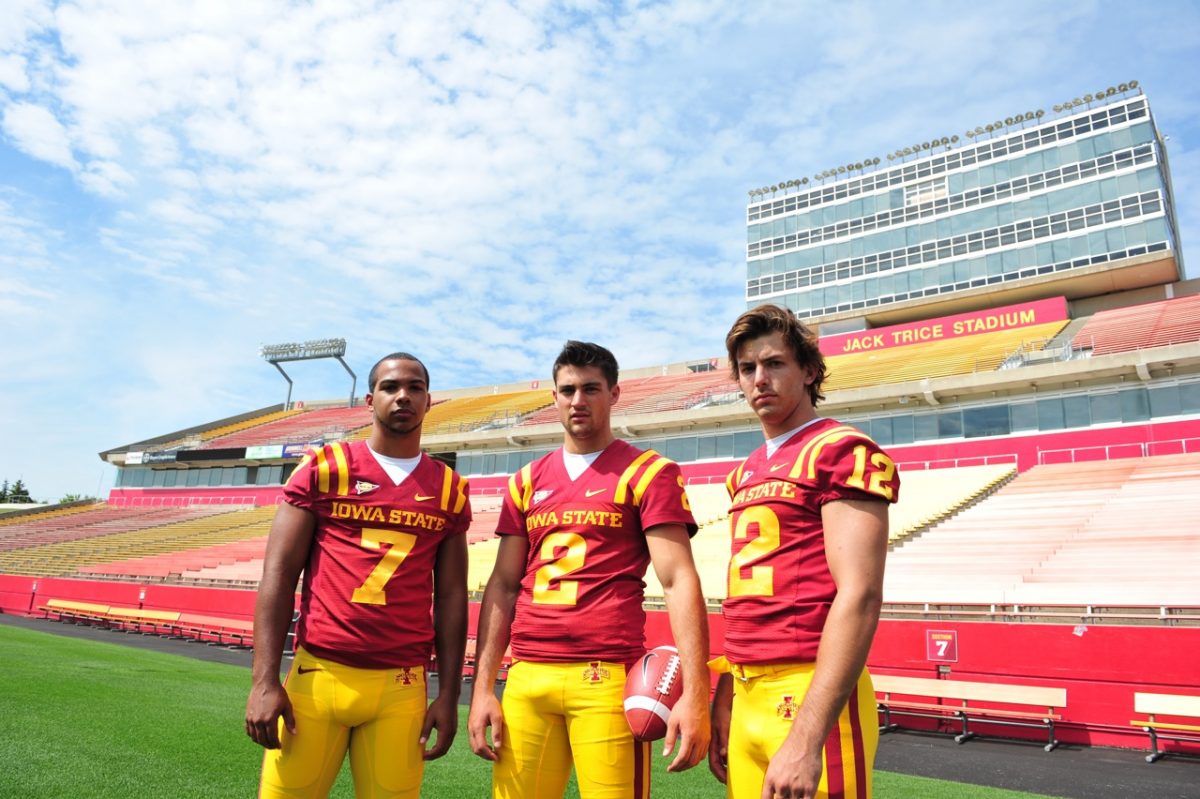 I have to thank my good friend Brent Blum for unknowingly coming up with my lead for this installment of “Monday Musings.”

Nine years ago I had my 1st day as an Iowa State Freshman…I got lost trying to find the library. Worse debut in Ames than Chizik.

Also had @ChrisMWilliams in class 1st day at ISU. Couldn’t stand him. His non-stop talking to some brunette interrupted my learning.

Although Blum’s arrogant tweets were uncalled for, the man does bring up a pretty decent point on a chilly Monday morning in August. For many, this is your first day of college. It’s a big day. It’s a day that makes even the most confident man unsure of himself and the world around him.

I’ll never forget my first day of college. As Ruby Sue put it best in the American cinema classic “Christmas Vacation,” I was ******** bricks.

The first college class I ever attended was Theater 106. It’s classes like this that make me angry every month when I pay off student loans. What. A. Joke. A certain young lady did catch my eye that day. Blum’s constant dirty looks from the row in front of my really interfered in my “game.” It was on that day that my rivalry with Blum began. It’s a rivalry that still hasn’t been settled nine years later.

That’s all beside the point though. The real point to this drawn out intro is that my four years as a student at Iowa State were truly the best years of my life. I knew my wife before we attended Iowa State together but it was on that camps where we fell in love. I found my passion (the website that you log onto everyday) at Iowa State. I met my best friends at Iowa State (I’m padding his already insanely large ego here but Blum is one of them).

If you’re reading this in a lecture hall right now (which I’m sure many are), do me two favors:

1) Quit reading this and pay attention to class. Laptops are a concentration KILLER. Seriously. Stay off of Facebook. Stay off of Twitter. Take this from the guy who used to play online poker (while betting real money – it’s a fact that I’m not proud of) during class. The only site I give you permission to frequent during class is CycloneFanatic.com. We cool?

2) Have a blast. You’re in for an awesome four years.

Oh. And try to stay out of jail okay….

— Go buy an umbrella. At some point, this will come in handy.

— Don’t get into a habit of skipping class. If you do it and get away with it once, this act can become contagious.

— You don’t need ice cream after every meal. Smell what I’m cookin?

— Wear a decent pair of shoes. I’m pretty sure I have foot problems due to the fact that I wore boat shoes and flip-flops around campus for four straight years.

— I fully realize that these are all pretty lame tips. Helpful, but lame indeed.

After Saturday’s third and final scrimmage of fall camp, Rhoads told reporters that he planned on making a decision this Tuesday – that being tomorrow. Like most everybody else, I think that man will be Steele Jantz but to be honest with you, nothing would surprise me. I’m cool with Jared Barnett too and here’s why.

I’m not going to write 1,000 words on Iowa State’s quarterback situation today. There’s nothing I can add to this conversation that hasn’t been broken down a hundred times since January. All I write today is this: Last season at this time, Iowa State had a JUCO (with no D1 experience) named as its starter. His backup was a redshirt freshman who also had no experience. The grizzled veteran of the group had recently been labeled academically ineligible.

This year, you’ve got two men who have proven they can win big games. You’ve got the freak athlete with a ton of “upside” and you’ve got the ultimate team leader. With the deepest running back group I’ve ever seen in Ames, a stout offensive line and more capable receivers than that of a year ago, Iowa State’s quarterbacks can only improve from 2011. They have to.

— Props to Andrew Logue for coming up with this gem of a stat regarding Iowa State’s defense on third down in the Sunday Des Moines Register:

— Here’s a shout out for everybody who attended our inaugural CF Kickoff Party at Kippy’s Place in Elkhart this past Saturday night. The turnout was fantastic. In fact, two of the folks from this group of quality people pictured below came all the way from Sioux Falls, S.D. ! How awesome is that?

— If you didn’t hear, we raffled off a pair of Iowa State football season tickets at the event too. Congrats to Tyler Feld of Ankeny for being the big winner!

— I hope that you like it. This thing is like six months in the making. Just know that we’re still in the process of making tweaks to every aspect of CF 3.0. Big props to Jeremy Lind for his help on the forums.

— I’m like a kid in a candy store right now Fanatics. The flexibility that the new site gives us from a content perspective is insane. The next few months are going to be awesome.

— So the wife and I took our dog Paisley to PetSmart yesterday. We do this about once a month. It’s always a good time. We put three toys on the ground and let Paisley go pick out the one that she wants to take home with her. So my wife had this crazy idea that Paisley needs a dog bed to place next to ours. So of course (women always get what they want), we walked over to look at dog beds. The one my wife is immediately drawn to? An orthopedic dog bed. No joke. Quickly after examining the price tag, I put the kabosh on this wild idea.

Did you know: That 80’s rocker Bret Michaels has a line of dog beds/clothing. Why? No really. Can somebody please explain to me why?