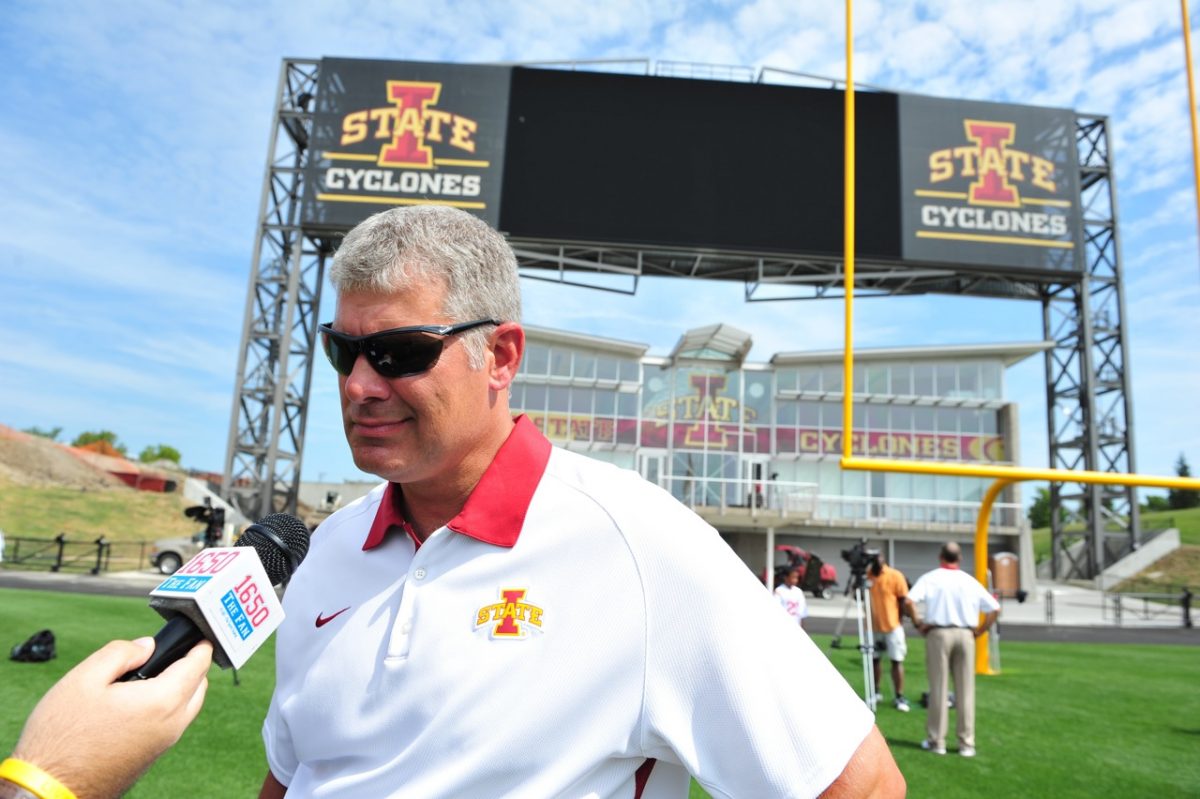 Iowa State’s fall camp is scheduled to begin on Friday. You know what that means don’t you Cyclone Nation?

The real quarterback competition (or controversy – depending on how you view the world) will officially begin at Iowa State. Yippee-ki-yay. Here’s a quick prediction on how the next few weeks will go down regarding that topic:

During this upcoming Thursday’s media day, Paul Rhoads will give us a general preview of the battle and then declare that no more conversation of quarterbacks will be had until he’s ready to make a decision. Of course there will be that message board “insider” who will tease you throughout this process. You, the passionate fanatic, will hang on his (or her – ladies are welcome at CycloneFanatic.com) every word. As Rhoads said last Thursday in Dallas, this thing will go down to the wire, which I assume will be the annual Cyclone Gridiron Club scrimmage in late August.

Football. Season. Is. Here. You happy?

For the first time in my life, I am legitimately ready for summer to be over. Enjoy a quick hits edition of this week’s Monday Musings at CycloneFanatic.com.

*** The best thing about Iowa State and West Virginia meeting up on “Black Friday” this year is that it’s a built-in excuse to not have to take my wife shopping. Now let’s all get greedy and pray to the football Gods that this becomes an annual tradition. Never having to worry about the debacle that is shopping on “Black Friday” again would be a major, major, major blessing in this 28-year old man’s life. I hate shopping to begin with. Throw my wife, her two sisters, a boat load of estrogen, 3 a.m. and a Thanksgiving hangover (in my belly of course) and it all adds up to equal hell on Earth. All of that to save three bucks on a pair of jeans?

I have two nemesis’ in my life. Brett Favre and the genius who originally came up with the concept of shopping on “Black Friday.”

No more my friends. No. More.

*** Props to my good friend Rob Gray of the Cedar Rapids Gazette for THIS PIECE that he published on Iowa State linebacker Jake Knott over the weekend. Awesome stuff.

*** If you haven’t by now, check out THIS PIECE that Brent Blum and I put together last Friday as we ranked the position groups on the 2012 Iowa State football team. This is a column that I have been wanting to write for quite some time but I waited for a variety of reasons – one to see if junior running back Shontrelle Johnson would get medically cleared to play this fall. Last week he did just that and because of the news, Iowa State’s running backs jumped passed the linebackers to take the top spot on my preseason rankings.

That’s no disrespect to James White and Jeff Woody either. But in the “talent” category, the “Rabbit” brings a whole new dimension to the table for running backs coach Ken Pope and new offensive coordinator Courtney Messingham.

More backlash from that column…

When talking Iowa State, you’ve got the running backs and linebackers in a tier of their own. Then there’s offensive line and defensive back on the second level. After that, ranking these groups got pretty difficult.

The toughest position to get a read on for the 2012 season? Without a doubt is wide receiver. Who knows?

*** Speaking of wide receivers, here’s a thought to ponder…Have Iowa State’s wide receivers really been that bad over the last three years or has the inaccuracy of the quarterback position (51 percent completion percentage last year to be exact) made them look that way? After all, my experience of playing tight end in middle school (sarcasm people, sarcasm) taught me that it’s a heck of a lot tougher to catch a pass thrown a foot over your head as compared to one right in the numbers right? My guess is that it’s been a passing game problem as a whole. Both go hand-in-hand with the other. I like Iowa State’s group at receiver a lot this year and by all means, the quarerback play should only get better. Stay tuned.

*** Not to be Mr. Negative Nancy today, but I was floored when I looked up quarterback ratings from the 2011 college football season to see Steele Jantz and Jared Barnett ranked 108th and 112th. Let’s look at this from a glass half-full perspective for a minute. Both men were rookies. They cannot get worse in year No. 2. They just can’t. The game will slow down, they’ll have more quality options at tight end and receiver and Iowa State’s quarterback play will improve this time around. It has to.

*** Rumor has it that 2013 Iowa State basketball commitment Matt Thomas looked pretty awesome over the weekend at the annual Las Vegas Fab 48 AAU Tournament. I’ve spoken to a few media members who were in attendance. Thomas really turned some heads (in a good way). Don’t be surprised if the Onalaska, Wisc. native cracks the top 70 and possibly the top 40 of one major poll when new ones are released in August.

*** This weekend served as my “last hurrah” before the start of the 2012-13 Iowa State athletics season. My wife, some family and some friends all met up in Guthrie Center to watch my favorite musician, Eric Church, in front of 25,000 fans. I went into this concert awfully skeptical. I love small towns and everything but the thought of piling that many people into such an area made me nervous.

It wasn’t a perfect evening but overall, I was very happy with the experience that we had. Granted, my wife ran in the venue right when the gates opened to save our group seats in the back row of the grandstand area. We managed to stay away from the riff raff for the majority of the evening. However, my sister and I decided to live it up for about 15 minutes in the middle of Chris Cagle’s show. As I put it, we walked through the “cesspool of humanity” near the stage. During this short period of time, we witness two fights and a couple of dudes playing “swords” (if you don’t understand that reference, don’t even bother asking) instead of waiting in line to use the john.

All in all, it was a quality night of fantastic country music. I’d give it an eight out of 10. Church put on a hell of a show. Watching him perform “Springsteen” in the rain was a pretty special experience that I’ll never forget. It’s just crazy though. I’m what you’d call an Eric Church diehard. I watched him perform in front of something like 1,000 people five years ago. Last year, we saw him in front of 10 K. He was big a year ago, but nothing like right now. Dude is a legitimate superstar.

*** I’ve got what I think is a genius programming idea for NBC and the Olympics. Let Bela Karolyi commentate every sport, all of the time for the next two weeks.

*** Here’s a shout out to CFer “isuno1fan” for this passionate thread taking a stand against the folks out there who choose to get married during college football season. In my humble opinion, this is a top 10 thread of all-time here at CycloneFanatic.com.  Shame on the “FDWxMAN” for his poor opinion on the matter. (NOTE that FDWxMAN is a friend of man. I can and will take very justified shots at him whenever I feel it is necessary to do so.)

*** While watching a little television on Sunday morning, I saw a skin care treatment commercial that said the following:  “Acne is out. Clear, sexy skin is in.”

Follow-up question: When exactly were pimples “in?”

If that isn’t the perfect note to end on, I don’t know what is. PEACE.