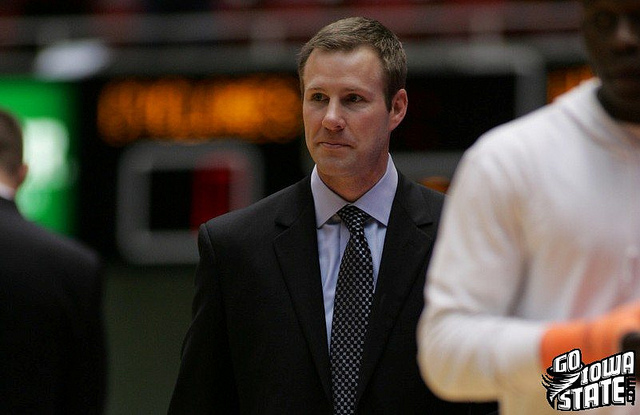 *** Late in the second half, a sarcastic (and deserving/humorous) "SEC" chant was heard throughout a sold out Hilton Coliseum. Iowa State’s season sweep of the Aggies had to feel good for this athletic department considering the conference affiliation circumstances over the last year.

“It’s interesting. A perimeter team like Iowa State against a strong post team in Baylor. Baylor has lost a couple of games and they need a win. I think if Iowa State shoots the ball well and does a good job on the glass, they can beat Baylor.”

*** Here’s what’s even more impressive about Iowa State’s 23 point victory. Offensively, it isn’t like the Cyclones were on fire or anything. Heck, Iowa State shot 37.5 percent from the field in the first half. It’s amazing what dominating the glass and downright nasty defense (that’s a good thing folks) can do.

A 18-3 Iowa State run to start the second half was for lack of a better term, the nail in Texas A&M’s coffin.

“That was as well as we’ve played coming out of the second half," said Fred Hoiberg. "Just the energy, the intensity and just picking up where we left off in that first half.”

*** A one-point squeaker counts as much as a 23 point onslaught right? Correct. But when a team is faced with a short turnaround like Iowa State will have playing on Monday next week, a little bit of cushion isn’t a bad thing.

In a year where we’ve seen Cyclones (I’m looking at you Chris Babb and Royce White) play upwards of 38-40 minutes per contest, Hoiberg was given the luxury to rest some of his studs in preparation for Monday’s tussle with Baylor.

Chris Allen played the most minutes for Iowa State with 32. Melvin Ejim was out there for 31 minutes. Nobody else cracked the 30 minute barrier.

INSIDE THE BOX SCORE: Here are a few stats that won’t get talked about much, but impressed me nonetheless.

— Iowa State recorded 18 assists on 25 made field goals. If I was writing this on Twitter, I’d put a hashtag and the word "unselfish" at the end of that sentence, just like this. #unselfish

— Melvin Ejim was 1-for-8 from the field in the win. Not great right? (It’s Lee Corso time) Not so fast my friend.

Ejim still brought constant energy to the floor and ripped down 10 rebounds in the win.

Ejim wasn’t the only Cyclone who was a major contributor without scoring a ton of points. As he always does, Tyrus McGee brought it. The junior only scored eight points, but had six rebounds and kept a handful of balls alive as he does night in, night out.

What about Chris Babb? Iowa State’s defensive ace went 1-for-5 from the field in one of his worst offensive games of the season. But once again, Babb’s defense was a cushion for the Cyclones as he held Elston Turner of Texas A&M to only eight points on a 2-of-7 shooting performance.

“If he’s not on the all defensive team, I’d like to see five better," said Fred Hoiberg after the game.

Not that it means anything but I agree Mr. Mayor. I agree.

Everybody contributed to this win.

INJURY UPDATE: Freshman Tavon Sledge did not suit up for the Cyclones on Saturday. Hoiberg told the media about Sledge’s minor knee injury after the game.

“He went knee-to-knee in practice the other day and has a pretty big bruise on his knee," said Hoiberg. "We’ll hopefully reevaluate him and have him in uniform on Monday.”

As for Bubu Palo, it’s possible that Iowa State will have him back in the lineup for next Saturday’s home date with Oklahoma. Palo has been out for over a month after breaking his wrist.

“He is getting motion back. It was great to see him out there practicing with the guys again (on Friday).He’s getting up shots, got some extra work in with conditioning after practice yesterday. He actually shot the ball pretty well, only being able to get out to about 14 or 15 feet," said Hoiberg. "I think that the big thing, the training staff and the doctors are worried about is if he falls on it again, that could cause some damage. I’m sure that every day he’ll get a little bit better. He’s probably doubtful for Monday but possibly next Saturday.”