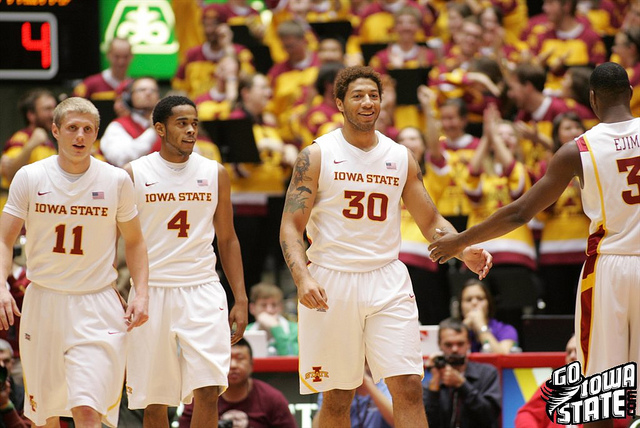 It all began during warm-ups before Iowa State’s 77-70 win over the Sooners. That’s when White’s shoe literally split in half. Luckily for Iowa State’s super sophomore, Oklahoma loaned White a pair of crimson colored kicks for that game.

It was a game in which White only attempted one shot, in which he was double-teamed for the majority of the 40 minutes. He made that field goal, a dunk, and tallied only three points on the day.

“I remember a pretty weird defensive scheme that had me pretty frustrated," said White. "And I remember my shoe breaking. That’s it. And us winning.”

White said that since that day on Feb. 4, he’s gone through "four or five" pairs of shoes.

"Nike shoes are breaking down this year," joked White, who is the only player in America that leads his team in points, rebounds, assists, steals and blocks.

As for what he’s expecting from the Sooners and head coach Lon Kruger on Saturday, flip a coin.

Iowa State’s biggest problem in Monday night’s 14-point loss to Baylor is a simple one to sum up.

“We were just too soft," said Fred Hoiberg before Thursday’s practice.

The Baylor game is now in the rearview mirror. Up next is an Oklahoma team that has lost five straight games. The Cyclones tallied 77 in its win in Norman earlier this month, in large part because Iowa State went 15-of-30 from 3-point range.

"I thought our ball movement was excellent," said Hoiberg. "Against whatever defense you play against, you have to have great player movement and try to create some open looks.”

White played a big part in that. The big man was unselfish and racked up a team-high seven assists in the win. Melvin Ejim led the way with 21 points for Iowa State, while Chris Babb went 4-of-7 from 3-point range.

BUBU IS BACK: The plan is for Iowa State to have sophomore guard Bubu Palo back and suited up on Saturday. Palo broke his wrist shortly before Big 12 play began.

“He should be cleared," said Hoiberg. “Bubu is going to be hopefully available for us and it will be great to have him back.”

Palo was averaging 4.7 points and 2.1 assists per game before the injury.

With Chris Babb’s constant hand-in-grill defense, Pledger struggled to go 5-of-14 from the floor the first time that these two teams met. Still, the junior made four 3-pointers and tallied 14 points in the Sooner loss.

Key to a Cyclone victory: Yes, Iowa State needed 15 3-pointers to win the first meeting between these two teams.

Is that a cause for alarm for Saturday’s rematch? Not really.

The Sooners out-rebounded the Cyclones 38-29 in that contest. If Iowa State cleans that up, it should more than make up for the difference in 3-pointers (assuming that the Cyclones don’t hit 15 again this time around). That won’t be easy though. Oklahoma enters this game as the Big 12’s second best rebounding team (behind Kansas State).

“On the glass, we have to gang rebound," said Melvin Ejim. "They’re big, tough and physical. Everybody has to come through and rebound.”

Another key that comes from the Feb. 4 game with Oklahoma was also a major issue in Monday night’s loss to Baylor. Interior defense.

The Sooners out-scored Iowa State in the paint 26-14 in game one.

“I thought that they broke us down early in the game and forced us to help which gave them some open lanes to go in and get some offensive rebounds," said Hoiberg.

Andrew Fitzgerald scored a career-high 27 points in that game. His partner in Oklahoma’s frontcourt, Romero Osby dropped 17 as well.

One of Iowa State’s goals on Saturday will be to limit the touches of that specific pair.

"They can post up very well and they’re very athletic," said Ejim. "We just have to limit them from touching the ball a lot.”

— Iowa State hasn’t swept multiple Big 12 teams in the same season since 2000-01. Last Saturday, the Cyclones completed a season-sweep of Texas A&M and will look to do the same with the Sooners.

— Something about Oklahoma get Melvin Ejim going…In two games vs. the Sooners, Ejim is averaging 20.0 points and 10.5 rebounds per contest.

— Oklahoma forward Andrew Fitzgerald has scored in double figures in 18 of the Sooners’ last 20 games.

— Ejim and Fitzgerald are former teammates at the Brewster Academy in New Hampshire.

Iowa State is 14-1 this season when scoring 70 points or more. Oklahoma currently ranks dead last in the Big 12 in scoring defense. Because of this, the Cyclones will hit 70 once again, win their fifth-straight league home game and improve to 19-8 in a convincing way. 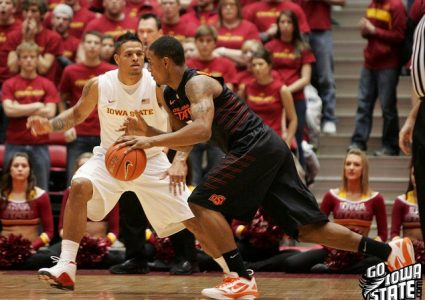