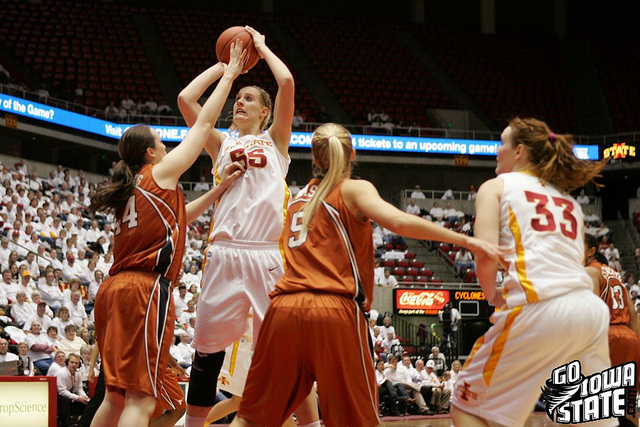 “Most of it was just kind of ugly, but a win is a win and we’re happy with it.”

Iowa State certainly didn’t play its best game on Tuesday night, but the Cyclones did the only thing that matters – record a victory. Iowa State (17-9, 8-7) survived a feisty Missouri team, 66-59, in overtime to climb over the .500 mark in the Big 12 after starting league play 0-5.

Most importantly, the win keeps the Cyclones’ NCAA Tournament hopes alive and well.

“It’s like my son Billy told me in the locker room,” Iowa State coach Bill Fennelly said. “He hugged me and said, ‘Dad, in February, every team has these games. Some people win and some people lose. We won. Let’s take it and take advantage of it.’ That’s what we need to do.”

The Tigers (11-15, 1-14) certainly didn’t make it easy. Missouri led by as many as nine points in the second half and held Iowa State to 29 percent shooting for the game by playing physical inside.

Fortunately for the Cyclones, that same physical play came back to haunt the Tigers. Iowa State made 25-of-39 free throws and was able to stay in the game despite its poor shooting.

As the second half clock dwindled, the Cyclones finally started to find their range. Hallie Christofferson swished a big 3-pointer to pull Iowa State within 52-51 with under two minutes remaining.

“You got to be willing to miss that shot,” Fennelly said. “A lot of people think, ‘Well if I pass it, it’s not my fault.’ You got to have some onions, man, and be willing to take that thing.”

After a pair of Missouri free throws, it was Poppens’ turn. Nikki Moody drove the baseline and found Poppens underneath for a traditional 3-point play to knot the score at 54. Poppens shot an Iowa State record 24 free throws on Tuesday, making 15.

Moments later, Chassidy Cole pushed the Cyclones in front 56-54 with two free throws. It was the first Iowa State lead since 18 minutes, 39 seconds remained in the first half.

It looked like Iowa State would win in regulation, but Missouri’s Sydney Crafton banked in a long 3-pointer to send the game in overtime tied at 57.

“Nikki (Moody) was up in there, and (Crafton) just got a little lucky,” Christofferson said.

Christofferson answered in overtime. The sophomore drilled another clutch trey, this one from the right corner, for a 60-57 advantage.

The Cyclones were able to hang on behind its stingy defense and free throwing shooting to secure another victory.

“Between the fans and just enough baskets, you survive,” Fennelly said. “That’s the nature of this league and the nature of college sports.”

Chelsea Poppens is probably going to sore on Wednesday. She hit the deck more times than Glass Joe.

Luckily, the junior owns a tougher chin than the pixelated boxer. Poppens scored 25 points and grabbed 16 rebounds despite being mauled by the Tigers inside all night.

“Going through this whole season, it’s all about keeping your poise,” Poppens said. “When something goes wrong, just step back up, motivate your teammates and bring the energy.”

Poppens set the tone for an Iowa State comeback with her relentless effort. Seven of her 16 rebounds were on the offensive end and were key to keeping the Cyclones in striking distance.

The 25-point effort was Poppens’ seventh game this season with 20 points of more. The double-double was her 13th this year.

Stat of the game

Iowa State won its first Big 12 game without Lauren Mansfield or Hallie Christofferson scoring 19 points. The Cyclones record entering Tuesday when neither of those two scored 19 points was 0-7.

Christofferson finished with 13 points against Missouri and Mansfield had three.

Missouri coach Robin Pingeton when asked about the officiating“No comment.”

“It was probably the first game in a long time where Missouri could have probably left the court and we couldn’t make a shot.”

–       Nikki Moody set the freshman assist record against Oklahoma with 111 assists this season. The Euless, Texas native dished out a career-high 11 assists against the Sooners to break Lyndsey Medders’ record.

–       Anna Prins tallied 10 points and seven rebounds off the bench. Brynn Williams chipped in three points and made a 3-pointer in a game for the 23rd time this season.

Iowa State will look to continue its fabulous February when it travels to Oklahoma State (13-10, 5-9) on Saturday. The Cyclones started the month with a 73-52 victory over the Cowgirls in Hilton Coliseum.

The defense also did its part, holding Oklahoma State to 30 percent shooting from the field.