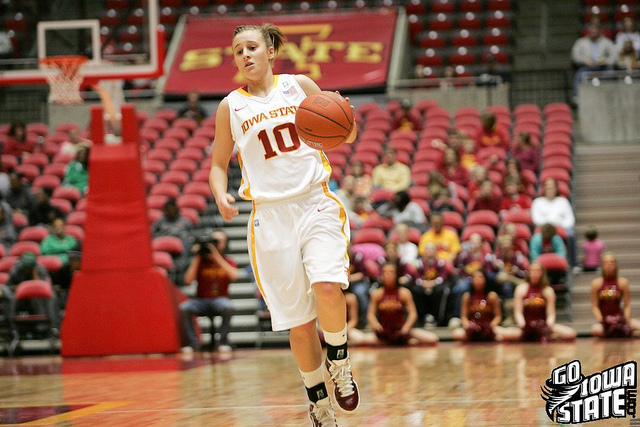 AMES, Iowa – Iowa State got a crucial 3-point bucket by Lauren Mansfield with 1:41 remaining, a hook shot from Chelsea Poppens at the 1:02 mark and hit 9-of-10 free throw attempts late to stave off Oklahoma and climb into the top half of the Big 12 standings with a 77-71 win.  The victory, the Cyclones’ seventh in their last nine conference games, lifts them to 16-9 overall and 7-7 in the Big 12, good for fifth place. Oklahoma falls to 17-9 overall and 9-5 in the league.

Mansfield led Iowa State with a season-high 22 points, in part via six 3-pointers in eight attempts. Her last three were the biggest of the game.  The Cyclone lead had shrunk to 61-60 with 2:27 to go. A pair of Nikki Moody free throws set the table for Mansfield’s hit from beyond the arc with just 1:41 to boost Iowa State back to a 66-60 lead. Oklahoma, which had five players in double figures led by Aaryn Ellenberg’s 19 points, never got closer as Iowa State free throws and Poppens’ basket maintained the cushion.

Anna Prins had 15 points and a team-high seven rebounds for Iowa State. Hallie Christofferson had 13 points and Poppens added 12 points and five rebounds in just 20 minutes of play because of foul trouble. Moody had nine points and a career-high 11 assists for the Cyclones.

The Cyclones led 43-28 at halftime and before Oklahoma chipped away at the Iowa State advantage. A Christofferson jumper with 17:36 to go in the game gave Iowa State a 17-point lead before the Sooners struck back.

Iowa State had the hotter hand in the first half, which offset the absence of Poppens, who only played eight first-half minutes because of foul trouble. The Cyclones hits on 8-of-15 3-pointers, built up a 17-point lead and finished the first half up 43-28. Iowa State finished with a season-high 11 3-pointers in 21 attempts.

Iowa State plays host to Missouri Tuesday at 7 p.m. CST in Hilton Coliseum. The game will be televised on Mediacom.