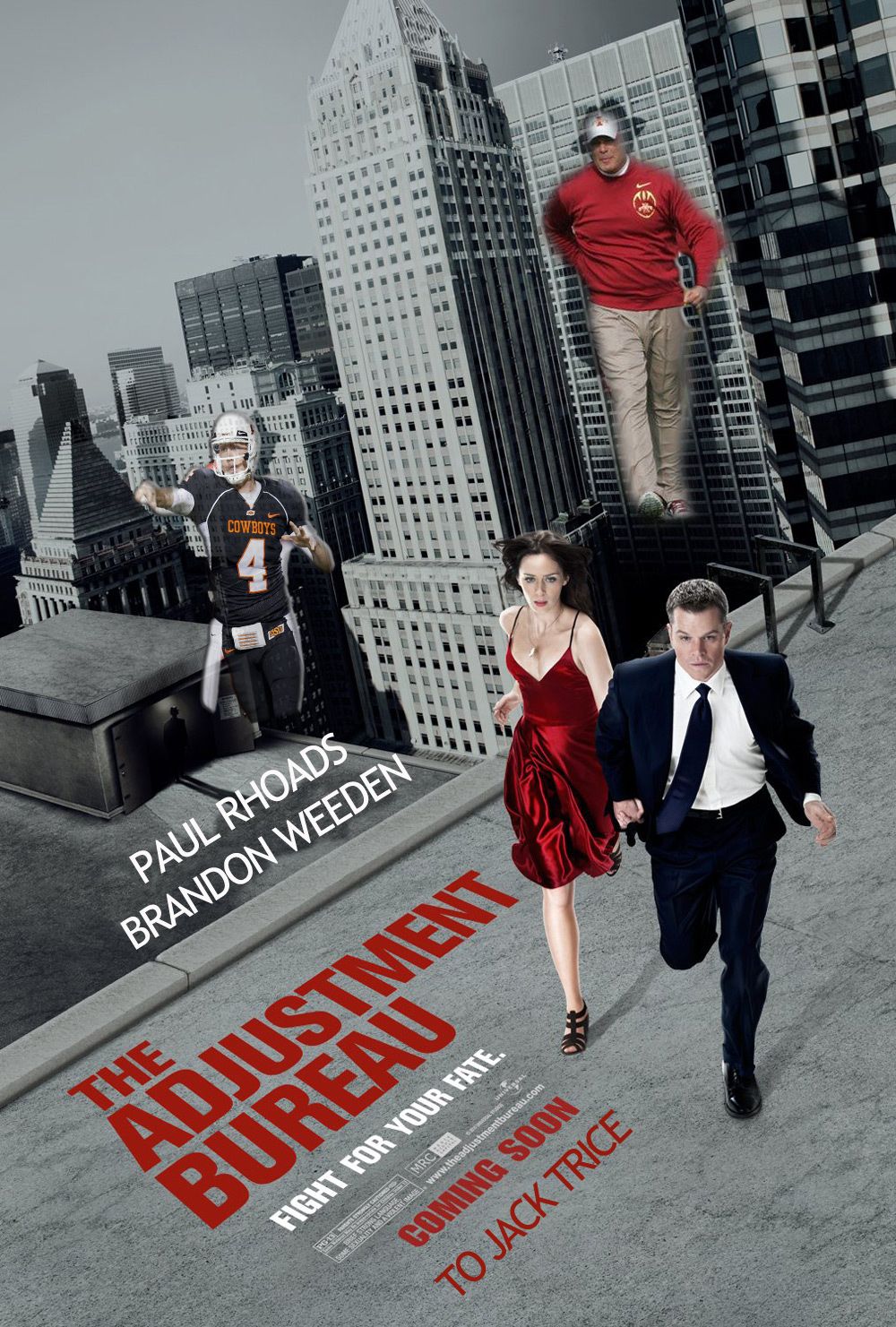 (Note: Parts of this column are fictional. Or is it the truth? We may never know.)

This summer I watched The Adjustment Bureau, a movie that is somewhat a political thriller and somewhat a chick flick. It features Matt Damon at his finest, running frantically (with a good looking lady of course) from high-powered officials that are chasing him. When will anybody learn that you just can’t keep Damon away from exotic women?

Anyway, the premise of the movie is that unseen forces "adjust" all of our daily actions to keep the world functioning as it should. These forces are embodied by a bureau of super-natural men that dress in suits and wear hats and go around fixing astray decisions made by humans to keep the natural order. It made for a quaint, entertaining movie and was well worth the 99 cents I splurged at the local Redbox machine.

I didn’t give the movie much of a second thought until this past weekend. When watching the Boise State kicker pull a Phil Mickelson shove job to lose 36-35 to TCU it dawned on me: The Adjustment Bureau is alive and in charge of college football. And if history is any indication, these "Men in Hats" will be ever-present at Jack Trice Friday night, which is good news for the Cyclones.

Let’s take a moment to entertain a brief history lesson. The BCS was created in 1998 to solve the disarray of the Bowl Alliance system.  Conspiracy theories were firing from all angles in the mid-90’s. It seemed as if only a few pre-determined schools were rotating as college football’s national champion. Apparently, the Adjustment Bureau had gotten lazy. Alternating Nebraska and Florida State as the national champion had worked for a few years, but the public was starting to question and uncover the truth.

There was a clear need by the public to construct a system to find out who was the best team in college football. So to quell the burgeoning questions, the Bureau went to work to create the mysterious BCS. They divulged this magical formula that is complicated enough to eliminate the masses from questioning its results. But in the same light, the formula the Bureau created kept the college football power structure in-tact to retain the natural order of life. (The same reason Ross Perot never won the Presidency. Order was needed.)

This meant that non-traditional football schools had to think they were capable of winning the national championship, but in the end the title still rotated between college football’s elite. And the status quo was maintained.

It was a brilliant plan by the Men In Hats. But the plan almost combusted in year one. Bill Snyder’s Kansas State team kept winning. This was not supposed to happen. K-State did not belong on the Mt. Rushmore of college football. The Wildcats were 11-0 and met up with a 9-2 Texas A&M squad in the Big 12 title game. A win would have assured K-State of making the first BCS championship game and therefore crashing the Adjustment Bureau’s structured world order.

Spear-headed by renegade JUCO quarterback Michael Bishop, K-State dominated from the get go and led A&M 27-12 in the 4th quarter. Then the bizarre began to happen. A&M found life and scored a touchdown to cut the lead to 27-19. With just minutes remaining, Bishop needed one first down to run out the clock. Facing a 3rd and 6, he scrambled up the middle to get the necessary yardage, then the unthinkable happened, he fumbled. A&M recovered, drove down the field and scored, converted the two-point conversion and won the game in OT. K-State was eliminated from the BCS. Tennessee went on to beat Florida State in the title game. Was the Adjustment Bureau at work with Bishop? We can only assume.

The BCS maintained its normalcy the next few years as The Men in Hats were hell-bent on preventing another K-State calamity. Florida State (1999), Oklahoma (2000), Miami (2001), Ohio State (2002), LSU (2003), USC (2004), Texas (2005) and Florida (2006) all won titles to keep the Adjustment Bureau from taking serious action. Although they did have a few minor scares along the way. In 2004 and 2005, this Iowa State team that nobody had ever heard of (minus the Troy Davis and Seneca Wallace bones the Bureau threw the Cyclones’ way to keep them occupied) was getting  way too close for comfort of busting up the elitist party. With a couple swift actions and miss-timed swings of the leg, the Men In Hats took care of things. No Big 12 Championship game for the Cyclones. They also took care of business in 2006 on a Rutgers team that somehow absurdly started 9-0 and reached No. 6 in the polls. A 30-11 loss on the road at unranked Cincinnati squashed the Scarlet Knights from relevance. Rutgers quarterback Mike Teel threw four interceptions that night after throwing just two picks the previous six weeks. Order restored.

Perhaps distracted by the race to the White House and primaries in both the Republican and Democratic parties, the Bureau was nearly befuddled in 2007.

At first, all was going well in ’07. When Halloween came around, Ohio State was undefeated and expected to cruise into the BCS title game. LSU had one loss but was widely regarded as the second best team. It set up to be a routine matchup for the Bureau. But disaster struck. Ohio State lost at home to Juice Williams and the Illini on November 10th. (Never trust a man named after a beverage.)

But all was not lost. Oregon, who had bought their way into the Bureau’s favor with Nike money, took Ohio State’s place in the top two of the polls. However the Ducks lost at Arizona on November 15th after quarterback Dennis Dixon fumbled several times before being knocked out of the game. LSU followed this by losing at Kentucky on November 23rd. All hell broke loose.

As it stood on November 24th, 2007, Kansas and West Virginia controlled their own fate to meet in the BCS title game.  This was absolutely unacceptable. Neither team belonged. The Bureau had already screwed up earlier in the year by allowing "The Dixie Chicks" to win Album of the Year at the Grammy’s.

And to make matters worse, Missouri, of all teams, was lurking in the shadows ready to pounce if KU or West Virginia had a miss-step. The Men in Hats went into overdrive to formulate the best scenario to retain balance. A carefully crafted series of events was set in motion. First, Missouri handled Kansas 36-28 in a game held at Arrowhead. This vaulted the Tigers to No. 1 in the BCS standings and ended KU’s title hopes.  The Bureau knew full well that Gary Pinkel feared Bob Stoops more than Kim Kardashian fears marriage and the Tigers were no threat to defeat OU. They were correct. The Sooners destroyed Mizzou in the Big 12 title game, winning 38-17. Bye bye, Mizzou.

But the pesky West Virginia Mountaineers still remained. And this was the steepest challenge of all for the Bureau. All that stood in WVU’s path to the BCS title game was a home contest against a beat-up 4-7 Pittsburgh squad. West Virginia was rolling. They were in the top 10 in the nation in total offense led by dual-threat quarterback Pat White and electric running back Steve Slaton. It was expected to be a red-carpet waltz into the BCS title game.

But they didn’t account for the Men In Hats. WVU missed two short field goals in the first quarter (the Bureau’s go-to move). It was the start of a strange night in Morgantown. WVU took a 7-3 lead into half, but Pat White was injured midway thru the 2nd quarter and uncertainty reigned. A quarterback sneak made it 10-7 Panthers early in the 3rd quarter. Seizing this opportunity, The Men In Hats possessed the Pitt defense. The Mountaineers gained a mere 20 yards in the 2nd half of play and Pitt forced three turnovers as they shocked the BCS world, winning 13-9.

The Pitt defensive coordinator who the Bureau possessed that night: Paul Rhoads.

LSU wound up playing Ohio State in the BCS title game that year and all was right with the world.

Everything has been relatively normal in the BCS the since that time. Texas Tech threw everyone a curveball by starting 10-0 in 2008. It took the Men In Hats a couple months to figure out Mike Leach (it’s a near impossible job), but they eventually humiliated the Red Raiders by having the Sooners demolish them 65-21 in Norman. Mission Accomplished.

Otherwise, the Bureau has been able to concentrate on other things like the global economy, the Republican primary and cranking out pop stars like Justin Bieber and Katy Perry that are safe for public consumption.  Florida (2008–the Bureau is a big fan of Tim Tebow–Sunday’s game against Kansas City the prime example), Alabama (2009), and Auburn (2010–starting to get lazy) all are "traditional" powers that won titles.

Unfortunately, that malaise is starting to fester again in 2011. Boise State was in danger of busting the powers up for the second straight year. But the Bureau awakened from their 2011 nap in time to shove Boise’s field goal kicker’s game-winner comically astray.

Their work is not done however.  Oklahoma State sits in prime position of making the BCS title game. With wins over Iowa State and Oklahoma, they are destined to play in New Orleans on January 9th. This is problematic. It is widely accepted that the Cowboys do not belong with the college football powers. They are 10-0 for the first time in school history. They haven’t won an outright conference championship since 1948. They haven’t played in one of the "BCS" bowls since 1976. The Men In Hats can’t allow them to continue on this pace. History tells us so.

This is a mysterious group of Cowboys. They have a quarterback in Brandon Weeden who is two months older than Super Bowl Champion Aaron Rodgers (28-years old). Could he be a Bureau plant? Somebody sophisticated enough to dash the Cowboys hopes at the last second? Perhaps. Think of the quarterbacks from those aforementioned teams past that self-destructed in the final moments. Has anybody heard from Michael Bishop recently? Mike Teel? Dennis Dixon? Chase Daniel? Todd Reesing? Pat White? Graham Harrell?  They have all faded into virtual oblivion. Coincidence? Only the Bureau knows.

Weeden has been playing all too well of late. He has thrown 23 touchdowns and only three interceptions in his last seven games. He is due for a convenient meltdown. Percentages may be blamed, but we will all know the real reason.

And guess who is on the opposing sideline? Mr. Paul Rhoads. A man that has been prepped by the Men In Hats for a situation just like Friday’s. He was the orchestrator of the Pitt defense that shut down West Virginia in an almost identical circumstance four years ago. The coincidences are too obvious to ignore. Heck, maybe Rhoads is one of the Men in Hats? Have you ever seen him on the sideline without a hat? Just saying.

So I ask you to beware of any suspicious men dressed in suits and fancy hats roaming the concourse at Jack Trice on Friday. Don’t bring any attention to them, they are just righting the world. Putting order back in play. Oklahoma State’s run cannot continue. The Bureau says so. 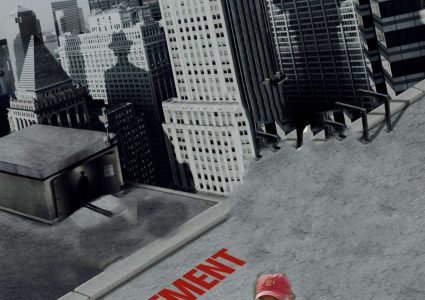 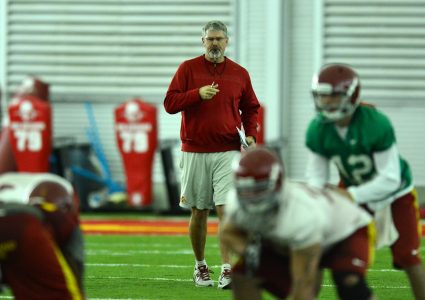