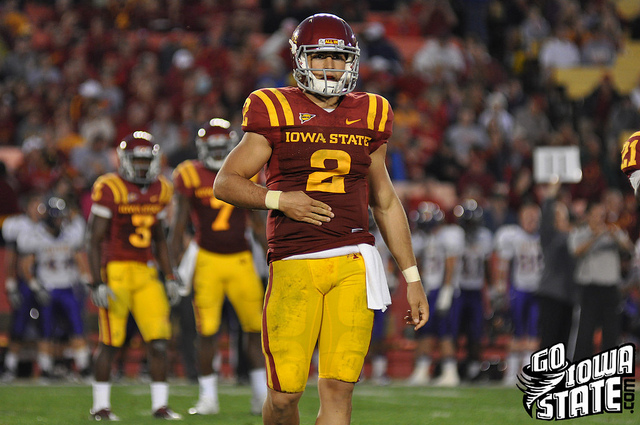 AMES – When all seems lost, Steele “Houdini” Jantz is at his best.

For the second week in a row, the quarterback lifted Iowa State (2-0) to an improbable comeback victory. This time it came against the Cyclones hated rivals, the Hawkeyes. Iowa State topped Iowa, 44-41, in triple-overtime Saturday at Jack Trice Stadium.

“Steele Jantz makes plays,” Iowa State coach Paul Rhoads said. “He made plays as a junior college player when he got recruited. He makes plays as an Iowa State Cyclone right now. Some guys rise up when the spotlight’s there. He certainly has in two football games.”

Jantz is a rare QB in the mold of John Elway when a play breaks down. Instead of looking at the rush to avoid a sack, Jantz feels the pressure, deftly moves away, and keeps his eyes downfield looking for an open target.

Time and again Saturday, Jantz utilized his unique talents to escape Iowa’s (1-1) grasp and make big plays. He finished the day 25-of-37 passing for 279 yards and four touchdowns. Jantz also added another 42 yards on the ground.

“You can’t even place a value on a guy like that,” left tackle Kelechi Osemele said. “You can’t recruit that. It’s one of those natural things. He is so calm under pressure. He makes plays all over the field.”

After playing efficient football all game, Jantz really started to work his magic in the fourth quarter. The Cyclones trailed 24-17 when they took over possession at their 41-yard line with five minutes, 40 seconds left in regulation.

Iowa State picked up one first down on 3rd-and-15, but quickly faced another daunting task on 3rd-and-20.

Jantz – a junior college transfer – drilled a pass to Darius Reynolds for 40 yards. The ball knifed perfectly between the corner and the safety.

Seven plays later came Jantz’s best trick yet. Facing a 3rd-and-goal from the 4, Jantz initially tried to execute a jump pass going to his left, when the Hawkeyes stuffed that option, the junior scrambled back to his right to find Darius Darks open in the end zone for the tying score.

The play could serve as a metaphor for Jantz’s incredible two-game career in Cardinal and Gold.

“The play was designed to throw it to the tight end,” Jantz said. “He was covered and I didn’t have anywhere to run. In those situations, I can’t really explain how it happens, but my instinct just told me to turn around and run the other way.”

Jantz’s instincts continued to lead Iowa State in the right direction in overtime. Iowa put a quick seven points on the board, but the Cyclones answered back. On fourth down, Jantz executed a perfect back shoulder throw to Reynolds for a 4-yard touchdown to send the game into a second overtime at 31-31.

The Cyclones wasted no time taking the lead on the Hawkeyes in the second overtime. This time, Jantz used his legs on third down to scramble for 13 yards down to the 1-yard line. James White scored his first career touchdown a play later to make it 38-31.

Iowa State converted on 13-of-20 third downs in the game and went 2-for-2 on fourth down. It helped having experienced receivers like Darks and Reynolds in the lineup. Reynolds led Iowa State with six catches for 85 yards and two touchdowns. Darks added three big catches for 22 yards and a TD.

“Whenever I’ve been apart of special teams, seniors make special plays when the game is on the line in big games,” Rhoads said. “They started to do that today.”

Iowa put up two more scores, but one was a field goal in the third overtime to give the Hawkeyes a 44-41 advantage. It seemed almost inevitable that the Cyclones would score a TD and win the game.

That’s exactly what they did.

After Jantz hit Darks on another third down, James White took an option play to the right into the end zone to seal the dramatic 44-41 victory.

“You can’t describe that feeling,” said Jantz, who wore a bowling shirt with his name and “all-in” embroidered on it after the game. “You’re not only happy for yourself, but the team and all the fans there. It’s really an indescribable feeling.”

When teams like Iowa State gain confidence like this, watch out. Behind its gutsy quarterback, the Cyclones will be tough the rest of the year – especially at raucous Jack Trice where 56,085 fans packed the house on Saturday.

“We are very confident,” Osemele said. “Last week (against Northern Iowa) we didn’t play as well as we could have. This was one of those games where we just wanted it more. We needed this one.”