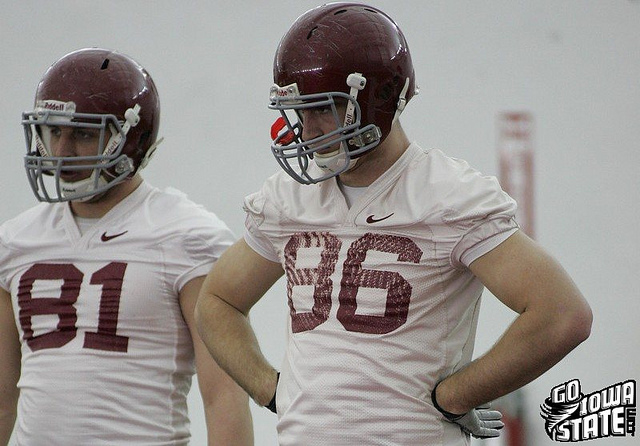 AMES – Luke Wells has been dealt a heck of an assignment for his first week in a new job. He must find the next Collin Franklin.

After coaching wide receivers the past two seasons, Wells was announced as tight ends coach on Tuesday by Iowa State head coach Paul Rhoads. Now, Wells is tasked with keeping the tight end position a potent threat in the spread option.

That’s no easy chore with the departure of Franklin. The former Cyclone and likely future NFL player caught 54 passes last season for 530 yards and three touchdowns.

“We want to make sure we fill the void and are consistent catching the football and consistent blocking,” Wells said.

That consistency is vital, especially because Iowa State will be breaking in a starting quarterback this fall. The signal-caller needs to know his tight end in the right spot when sirens are blaring in the pocket.

“The tight end needs to be your friend,” Wells said.

Wells should know. He played quarterback at Oklahoma before starting his coaching career. From there, Wells moved on to Louisiana-Monroe where he coached tight ends in 2004 and 2005.

He’s now in the same spot with the Cyclones after his stint as wide receivers coach.

“It’s fun to be in the trenches,” Wells said. “It’s been a good transition.”

Wells’ expertise on catching footballs is crucial to an inexperienced group in Cardinal and Gold. Wells said there is currently no “starter” at the position, but it’s evident that Kurt Hammerschmidt is the leader to earn that spot.

In preparation for his expanded role, the 6-foot-6 Hammerschmidt bulked up to 260-pounds. Last season, he caught five passes for 36 yards last season playing behind Franklin.

“The tight end is a primary receiver in a lot of plays,” Hammerschmidt said. “Tight ends have a major role in the offense.”

Hammerschmidt is working hard on running crisp routes and his hand placement when catching the football.

“I want to see him catch ball in traffic,” Wells said. “He’s really impressed me because he’s a physical kid.”

Running behind Hammerschmidt on the depth chart are Ricky Howard and Reid Branderhorst at No. 2. Branderhorst played basketball at Simpson College for two seasons before coming to Ames.

One guy who could surprise is redshirt freshman Pierce Richardson. The Burbank, Calif, native stands 6-foot-4 and 227 pounds.

“We need to get him developed,” Wells said. “He’s not with those other guys, but he’s shown promise.”

Don’t forget future Cyclone Ernst Brun. The 3-star junior college recruit could emerge as a threat down the seam for Iowa State when he arrives in Ames this summer. 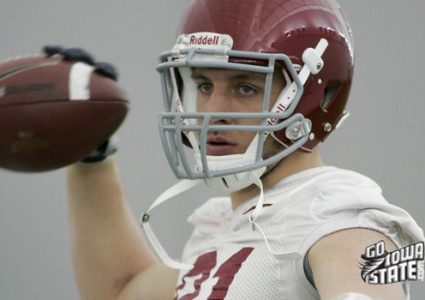