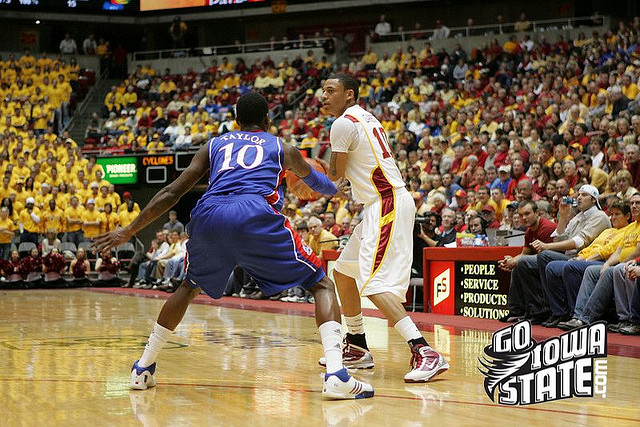 The third-ranked Kansas Jayhawks (15-0) will invade Hilton Coliseum tomorrow night. Get to know more about Iowa State’s second Big 12 opponent in 2011 by reading this transcript from Bill Self’s Monday teleconference and more quotes below.

I’ve noticed that you’re kind of liking this three point guard combo. Can you talk a little bit about Elijah Johnson within that context?

BS: We have four little guards who deserve to play. I should have played Elijah more yesterday. We have four little guards in Tyrel (Reed), and Josh (Selby) and Tyshawn (Taylor), so we are very small on the perimeter, about as small as we have been since we’ve been here. We need to be able to create some pace and do some things with those guys. Yesterday, we did a poor job of that. In games prior to that, we have actually done a decent job. That is one way that we can beat other team’s size advantage on the perimeter, is create some pace.

Your record is going to have people compare the team to the last time you went undefeated in non-conference play. Can you compare the two teams? Obviously, this team is not there yet.

BS: No, this team isn’t close. That is okay too. I didn’t anticipate us being close. I was hoping that we’d be playing much better going into conference play. I think that we took a little step backwards yesterday. The one thing we did do was played great in overtime and did some good things when the game was on the line in overtime. That takes some positives out of it. We can take a lot of teaching moments too. Last year’s team went 14-1 in the non-conference. We have had maybe one other team run the table in the non-conference. To be honest with you, that is all great but it doesn’t mean anything. The second season counts far more than the first. The third season counts the most. I hope that we can do comparable things to what that team did in 2008. But still, I really believe that this team has been very fortunate through the non-conference schedule. We have played just good enough to win in some games that we could have lost. We are going to have to play much better moving forward.

How would you evaluate your team at this point in the season?

BS: We are doing okay. We are a pretty solid team. We are pretty balanced. We play in spurts way too much and are inconsistent. We don’t do a lot of things great but we do a lot of things pretty well. I like them but there is still a lot of room for improvement.

Now that college football is over, basketball is really going to be focused on now across the country. Has anything with your team, the Big 12 or the country really surprised you up to this point?

BS: I think that we have had a good college basketball season so far. One thing that has become very apparent though is that there are very few major upsets. I think there is more parity. If Duke were to lose at home, that would be a major upset. But there aren’t very many of those. The other thing that you’ll find is and there could be exceptions in certain leagues, but it is hard to win on the road, in the league. It is hard. You can already look at top 25 teams that have lost on the road to unranked teams within their leagues. League play is just different. What people perceive as being a bad loss or a big upset isn’t anymore. There is too much parity and teams are too evenly balanced. Some teams that can dominate their leagues will still do that. In some of those top BCS conferences, you are going to see winners with three or four losses when you haven’t in year’s past. I just don’t see much of a separation.

All teams play in spurts. But if you can kind of labor around and in a four-minute stretch hit a 14-2 spurt or something, that is enough to win a game a lot of times. We have been a good spurt team in so many respects. Right now, we are a good spurt team but we are also a negative spurt team. Our bad minutes led to 10-2 runs. In the past, our bad minutes led to 7-4 runs. We have got to get better at that. There is no question. We need to value the basketball better. You are right about our road schedule starting out. We are at Ames. We have Nebraska at home. We go to Baylor. We have Texas at home. We are at Colorado. We have K-State at home. That’s hard. I hope that I said it right. The next three weeks, you are exactly right, will tell a lot about our team. I hope that we are not playing our best ball within the next two or three weeks but certainly, we need to play the best ball that we have played to this point because the competition is going to be the stiffest.

Bill Self on what kind of defense Iowa State runs:

“They do play some zone and kind of a matchup 2-3-type look. And they may throw some stuff at us that we haven’t seen based on some recent games that we’ve played. They could throw in something that maybe they haven’t done much of but who knows. The one thing about coaching is this, you’d rather do what you do rather than always basing it off of what somebody else does.”

On clearing Mario Little for competition:

“It wasn’t an easy decision but I really believe 100 percent in my heart it’s the right decision. I tried to look at it as if he was my own child. I also let the legal system play out. We’re certainly not going to make light of anything that happened. Any time you’re dealing with the law it’s all serious. He has two misdemeanor battery charges. He has done a lot of things through us and I had thought that holding him out six games and bringing him back for conference would be the time to do it. He’s handled this as well as you can considering how much it hurt him. A big part of his life is wrapped up in what happens here in his life as a Kansas basketball player. And five minutes of whatever happened, and who knows exactly what happened, but we know something did and it was wrong. But the five minutes to me, to totally affect his opportunity to play overseas, his opportunity to go ahead and finish in uniform and have a good experience, that would be a springboard for the rest of his life and I thought that was too severe to take from him. I want to do what is best for our program first and foremost. I think this is what’s best for our program. Sometimes coaches have to do things and make decisions that sometimes are popular and sometimes aren’t very popular, but I feel like I would seriously be letting him down as his coach, somebody that said would always look out for him and have his back. In this particular situation, because I believe that he has done what he should have done, and certainly the remorse I know he feels. It wasn’t an easy decision but something I feel is the right decision.”

Notebook: No pressure on these Cyclones