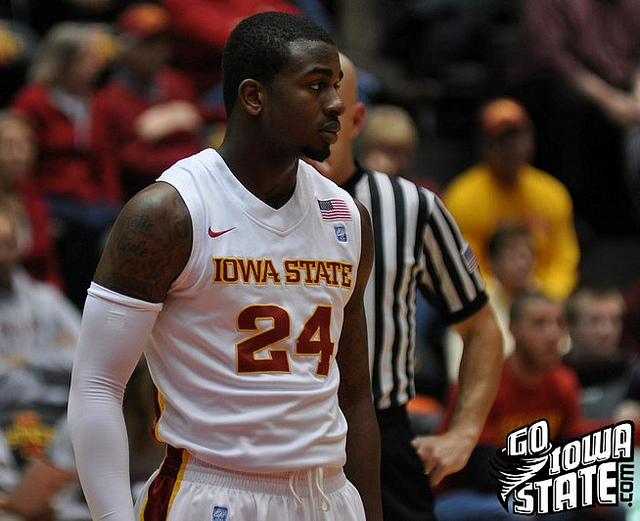 I was going to take this week off from writing the “Cyclone Slant” because really, besides a few hoops competitions, nothing is going on in the world of Cyclone athletics. We’re all on Christmas vacation baby! Err….maybe not.

While kicking back and enjoying the prestigious Champ Sports Bowl, Tuesday night’s news of DeMarcus Phillips’ intentions to transfer was brought to my attention.

When the Des Moines Register’s Randy Peterson first reported this story on his Twitter feed at around 5 p.m., I wasn’t surprised at all.

I made it a point to watch Phillips in Iowa State’s 104-63 win over Chicago State on Dec. 21. To put it nicely, Phillips seemed disinterested. I found that a bit odd too considering that his primary competition for playing time, walk-on redshirt freshman Bubu Palo, had just set a career-high one game before (vs. Dartmouth). Phillips should have come off the bench like a man playing for his career.

He didn’t. Instead, we saw what was a very DeMarcus Phillips-like performance of three points and three rebounds in 11 measly minutes. The fact that Phillips only played 11 minutes in that joke of a game was telling to me.

In a way, I do feel for Phillips. He suffered a hand injury in early November when this team was really starting to solidify during practice. While Diante Garrett, Jake Anderson, Scott Christopherson and Bubu Palo were developing chemistry, Phillips sat and watched. Unfortunately Phillips, who was the 2008 Wisconsin Player of the Year, never caught up. He never seemed to be in the groove with his teammates. I wrote about this after Iowa State’s 91-88 win over Creighton on Nov. 21. CLICK HERE to read it.

I do believe that DeMarcus Phillips is a much better basketball player than what we saw during his short 13 game career at Iowa State. I hope that he proves the preceding statement to be correct wherever he decides to go from here.

Phillips averaged 2.5 points and 2.4 rebounds during his time in Ames.

Losing Phillips isn’t a big deal right now, but it could be in the middle of January. Iowa State’s roster just went from being cardboard thin to paper-thin. Behind the big three of Garrett, Anderson and Christopherson, Fred Hoiberg now has one backcourt player to turn to and that is walk-on Bubu Palo. This hasn’t been an issue so far against the Dartmouth’s of the world but Cyclone fans need to pray that the starting guards stay healthy and out of foul trouble.

With Phillips’ departure, Iowa State now has nine eligible players (eight scholarship) on the roster and that’s counting Eric McKnight, who clearly is not ready to contribute. Three of the four Iowa State reserves are frontcourt players. To be blunt, Iowa State has three scholarship guards on its active roster heading into the Big 12 season.

On the surface, this transfer means nothing. It isn’t likely that Phillips would have played much the rest of the season. It is the “what if” factor that I am worried about. Injuries, suspensions, attrition, etc., are all a part of basketball.

I’m going to quickly wrap up this column and go knock on some wood. Carry on fanatics.