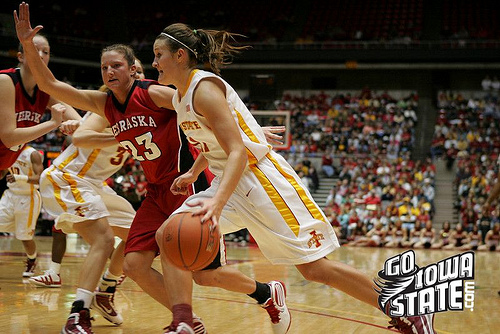 Thanks to an efficient offense, Iowa State blew out Florida A&M, 85-60, in its first game of the Cyclone Challenge. The victory pushed Iowa State to 9-2 on the season and 70-1 all-time at home in December under Coach Bill Fennelly.

“I think we had a pretty good shooting day,” point guard Lauren Mansfield said. “We shot the ball well, so we had that confidence. We kept shooting it and shooting pretty well. Once you get on a roll, your confidences goes up. It’s exciting.”

After struggling early in the year, the Iowa State offense has found its rhythm. The Cyclones made 26 baskets against the Rattlers and recorded assists on 19 of those. Iowa State was even better against Cal State Northridge on Dec. 20, notching 26 assists on 34 field goals.

The improved offense is translating into easy wins. The Cyclones have won their last three games by an average of 39 points.

It might be a little premature, but it’s probably time to rename this award in honor of Kelsey Bolte. The Iowa State senior is on fire.

“Kelsey is having a phenomenal senior season,” Fennelly said. “It’s great to see. She’s engaged in everything we do. Right now, when she plays well, we are tough to beat.”

Bolte knows on most nights she will need to carry the offense, especially when Big 12 play starts. She has responded to the challenge. On Wednesday, Bolte drilled seven 3-pointers and finished the game with 28 points – a new career high.

Bolte’s now splashed five 3-pointers or more in four games this season, and 14 times in her career.

“I felt pretty good on the 3-point line,” Bolte said. “I guess I didn’t know that was my career high. But hey, I do now. It feels pretty good.”

It didn’t take Bolte long to get going against the Rattlers. On the first possession of the game, she drilled a 3-pointer. Later, she used a nifty pump fake to get around a Florida A&M defender and hit another trey.

Bolte’s quick release allowed her to get shots off before the defense had a chance to react.

“They started in a zone and her eyes got really big,” Fennelly said. “We ran some good stuff to get her the ball.

“She’s kind of like Scott Christopherson on the (Iowa State) men’s team. When they miss, you’re surprised.”

No one will ever replace Allison Lacey, but Lauren Mansfield is doing her best to try. The junior continues to play at a high level for the Cyclones.

In Wednesday’s blowout, Mansfield quietly went about her business. Yes, she scored only five points, but she finished with 10 assists in 30 minutes. Add in seven rebounds, and it’s clear Mansfield did the little things to win.

In her first season in Ames, Mansfield is leading the Big 12 with 6.7 assists per game. That number is good enough for 10th in the country.

“I’m definitely feeling a lot more comfortable with the ball, and knowing kind of what my teammates do and what they like,” Mansfield said.

“Obviously, Kelsey (Bolte) helps my assist stats a lot. I look for her a lot and look for the open player.”

Mansfield got the Cyclones rolling early in the first half with assists on four-consecutive possessions. The lefty point guard drove and dished to Kelsey Harris for a 3-pointer to push Iowa State’s advantage to 23-11. Later in the half, Mansfield found Christofferson inside for a bucket and 28-13 lead.

Florida A&M tried to claw back into the game in the second half, but Mansfield found her sharp-shooting teammate Bolte for another 3-pointer to make the score 61-42.

“Lauren did a great job of giving me the ball and finding me on the floor,” Bolte said.

That seems to be the case often this season.

Iowa State is back in action on Thursday when it hosts Prairie View A&M at 7:30 p.m. The Lady Panthers (4-6) lost on Wednesday to East Carolina, 68-55, in the first game of the Cyclone Challenge. Robin Jones led Prairie View A&M with 18 points. 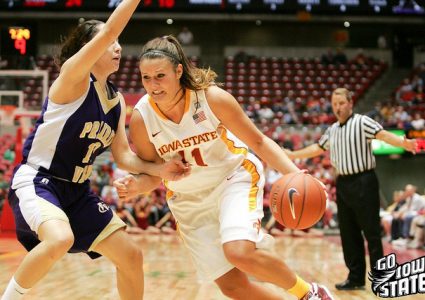