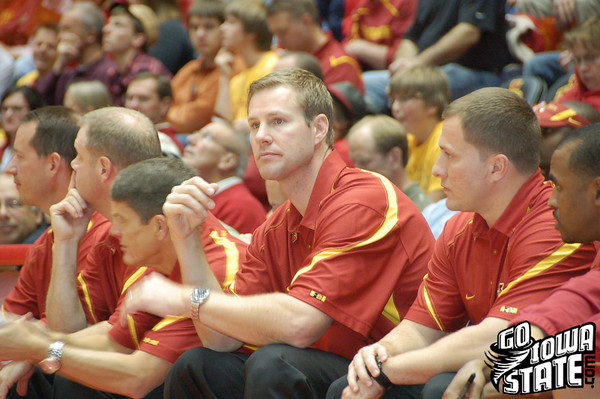 The last time Diante Garrett had contact with Creighton head coach Greg McDermott was on his birthday.

While many fans might be building Sunday’s looming contest against former Cyclone head coach Greg McDermott as a bit of a grudge match, that certainly isn’t the feel inside of Iowa State’s program.

“I just look at it as another game,” Garrett said. We want to come out and get the win.”

In fact, Garrett told reporters that he thinks Sunday’s game will be “fun” and that he’s looking forward to playing against his former coach.

Fred Hoiberg hasn’t even talked to his team about the McDermott story while preparing for Sunday’s game.

“I haven’t,” Hoiberg said. “Everybody was pretty pumped up about the performance the other night against Drake. We talked about that and how we want to continue to go out there and play with that type of style.”

So the program is telling me that this is a non-story. McDermott is telling Creighton media members the same thing. We all know better than that though. Emotions will be flowing inside of the Wells Fargo Arena on Sunday and really for the first time this season, a team that poses a legitimate threat in the frontcourt will test Iowa State.

“The big thing is to continue our defensive pressure. We’ll try to keep up the tempo and keep up the pace and continue to rebound the ball on the defensive end of the floor,” Hoiberg said. “They do a tremendous job of taking care of the ball. It is going to be tough to get a lot of steals on them because they are experienced and well coached.”

BREAKING DOWN THE BLUEJAYS

Conventional wisdom tells you that Creighton will attempt to slow things down on Sunday. This Fred Hoiberg quote just might surprise you.

“They will look to push it,” Hoiberg said. “That is their first look, is to get up the floor.”

“We don’t expect this to be a half court, slow it down type of game. They will try to bang it inside. We know that. This will really be the first time we have seen that on a consistent basis.”

Two of Creighton’s wins have come against common opponents as the Cyclones. The Blue Jays beat Alabama State and Northern Arizona by 14 and four points respectively. Freshman Doug McDermott, who was just named the Missouri Valley’s Player of the Week, is averaging 12.7 points and 5.0 rebounds per game so far. When you combine McDermott with senior Kenny Lawson, the MVC Preseason Player of the Year, Creighton’s frontline will easily be the best one that Iowa State has seen this season.

–       Iowa State vs. Greg McDermott. Duh. That’s what everybody is talking about.

–       How will Iowa State respond to Creighton’s frontcourt of Kenny Lawson and Doug McDermott?

–       Who wins the pace battle? Will the Cyclones turn this into a track meet or will the Blue Jays lull Iowa State to sleep? Or, will Creighton attempt to run with the Cyclones?

–       Fred Hoiberg is just the fourth coach in Iowa State history to begin his tenure 3-0.

–       The name “Steve Merfeld” might as well be a four-letter word in Ames. Merfeld, who coached Hampton back in 2001 (yes the upset), is now one of McDermott’s assistants in Omaha.

I think that this game will be played at a faster pace than what a lot of people think. At the beginning of the year, I picked Creighton to win this contest. However, when you look at what each team has done up until now, it is impossible to not go with the Cyclones.