After last night, the YMCA Capital City League’s regular season is now in the books. The playoffs will begin on Wednesday. Here is a quick wrap up on what your Iowa State Cyclones did last nigh in Des Moines, with a brief preview of the playoffs as well.

–       Iowa State freshman forward Melvin Ejim once again highlighted the evening for Cyclone hoopsters scoring 19 points while grabbing eight rebounds for his Tim Vorland Photography squad. Ejim had a rough night shooting, going 7-for-17 but he did other things well. On top of the stats listed above, Ejim dished out four assists, recorded two steals and also blocked a shot.

–       Ejim’s teammate and fellow Cyclone freshman Eric McKnight is working himself back into shape after suffering a high ankle sprain earlier this summer. McKnight went 4-of-9 from the field on Sunday, scoring eight points and ripping down five rebounds. McKnight also blocked two shots.

–       Southern Illinois transfer Anthony Booker played on that same Tim Vorland Photography squad last night. Booker struggled mightily from the floor, shooting 4-for-15 on the night, but did bring home a double-double with 13 points and 14 rebounds.

–       Scott Christopherson once again led the way for his Peak Performance roster by scoring 24 points, while going 11-of-20 from the field. Christopherson had 10 rebounds in the game as well.

–       Iowa State senior Jamie Vanderbeken went a disappointing 0-for-5 from 3-point range on Sunday, but still managed to score 16 points while going 7-of-14 from the field. Vanderbeken nearly had a double-double, while recording nine rebounds.

–       The worst stat of the night was produced by JUCO transfer DeMarcus Phillips, who went 1-for-15 from the field last night. Phillips scored four points for Capital City Orthopedics, while tearing down five rebounds and six assists.

–       One of Iowa State’s young freshman frontline players is just starting to get his feet wet in the YMCA Capital City League. That is Jordan Railey. Last night, Railey went 1-of-8 from the field, while scoring six points and recording eight rebounds.

The YMCA Capital City League playoffs begin on Wednesday. The schedule looks like this, with Iowa State’s players on that roster in parenthesis.

Granite (Jake Anderson & Chris Babb) and Peak Performance (Christopherson & Vanderbeken) both have byes on Wednesday. Semi finals and finals will be played on July 18. 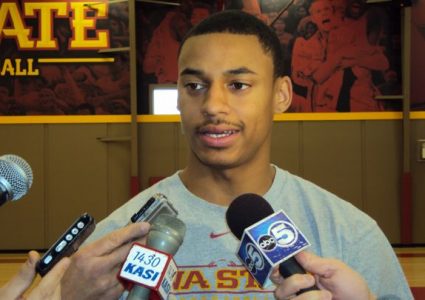