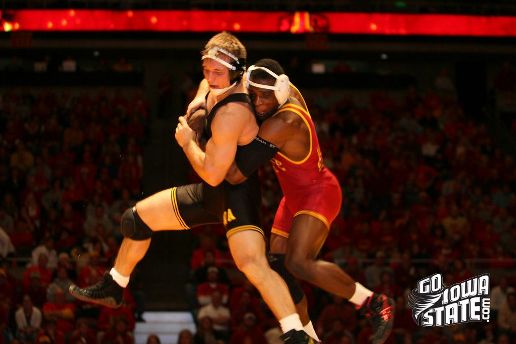 ITHACA, N.Y. – The second-ranked Iowa State wrestling team made its weekend journey to New York into a successful business trip, beating No. 6 Cornell by taking seven of 10 matches for a 24-13 victory before more than 4,000 Big Red fans in Newman Arena.

“It is exciting to come out of here with a win,” Jackson said. “Cornell is a very strong team. To win seven matches to three losses is huge and we’ll take that moving forward. We won the tight matches and that is important.”

Iowa State’s Jake Varner (21-0), the top-ranked 197-pounder in the country, proved to be too much for fifth-ranked Cam Simaz of Cornell. Varner rolled up the points quickly against Simaz, holding a 14-1 advantage heading into the final period. ISU’s three-time NCAA finalist went to work, trying to add a pin to the Cyclone team effort, but ended the match with a technical fall by a score of 19-1 (6:56).

Two-time All-American Jon Reader put bonus points on the scoreboard for the Cyclones with a 14-4 major decision of Cornell’s Justin Kerber at 165 pounds. Reader (18-3) scored six takedowns and didn’t allow an offensive point in the victory.

Five Cyclones won matches by decision. Iowa Stater Nick Fanthorpe (11-6) helped put his squad back on track after the early 6-0 deficit with an upset victory at 133 pounds. The senior All-American, ranked 13th, used an early spurt of points to hold off Cornell’s seventh-ranked Mike Grey, 6-3. Cyclone teammate Andrew Sorenon (21-6) was victorious by an identical score at 157 pounds, winning 6-3 over John Basting of Cornell.

The Cyclones will continue to be road warriors as they take on Arizona State in Tempe, Ariz., Feb. 7. Competition begins at 3 p.m. CST.