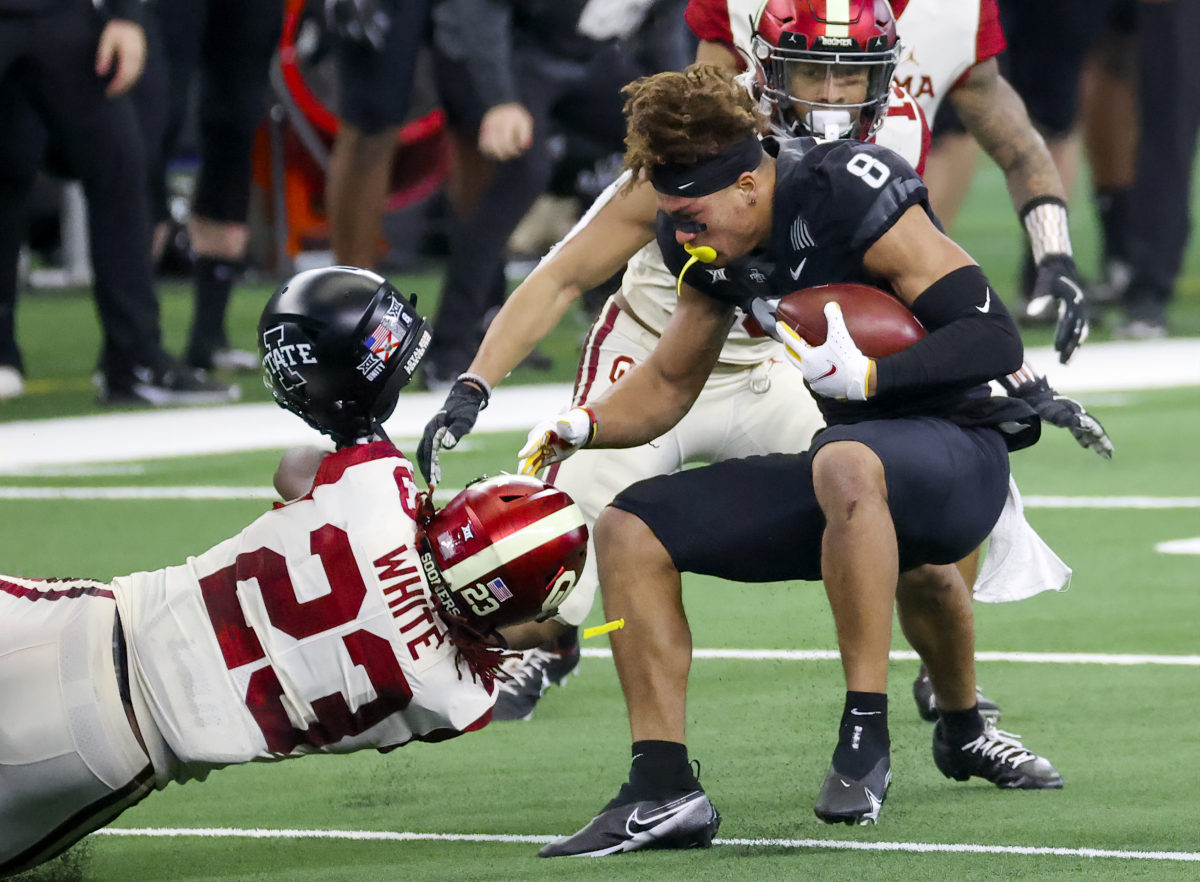 The Cyclones’ senior defensive end could not find the words to sum up the emotions, so he simply looked into the camera. He shook his head and shrugged his shoulders.

We all get it, JaQuan.

No. 6 Iowa State lost 27-21 to No. 10 Oklahoma on Saturday in Arlington, Texas, denying the Cyclones of their first conference championship since 1912 and handing the Sooners their sixth-straight Big 12 trophy.

The Cyclones were down 17-0 in the first half and 24-7 at halftime. They clawed and fought their way through the second half, pulling within three points then ultimately getting the ball back down six points with two minutes on the clock and immortality in Ames, Iowa just 70 yards away.

The furious comeback came up just short with Brock Purdy’s third interception of the game inside the Oklahoma 10-yard line and only seconds left on the clock.

The greatest Cyclone team in recent memory came up just short of ending one of the longest streaks without a conference championship in college football. While that obviously hurts today, will hurt tomorrow and in many of the days to come, this team did prove to be the toughest and grittiest Iowa State team in recent memory as well.

For that, we should all be proud — and we’ll align with JaQuan there as well.

“I definitely am proud,” Bailey, the Cyclones’ all-time leader in sacks and tackles for loss, said. “I will say that. I am definitely proud of the way our team just kept fighting.”

Bailey and the Cyclone defense held the explosive Oklahoma offense to just three points, 121 total yards and 3.9 yards per play during the second half while forcing five punts.

The offense was able to grind out 14 points despite the offensive line playing probably its worst game of the season and Purdy being forced to run for his life the majority of the afternoon.

The Sooners, the Big 12’s biggest bully, threw everything they had at this Cyclone team and Iowa State wobbled at moments, but stayed strong until the final moments.

“Really all I asked our kids in this game is just be who you are,” Matt Campbell said. “So, I guess the reality is we are who we are, and I think that’s what makes this program really special. I think it’s what makes this team really special. You know, you hate it that you’re a couple of points short in this game, but, boy, oh, boy, you leave pretty damn proud that the culture, the character, and really the leadership that this program and this team has and the resolve it shows pretty much has shown up each and every day and each and every week from the start of the season till the end of the season. So I guess mission accomplished. We were who we were.”

There will be plenty of things we can dissect from this game, Purdy’s three picks, the struggles of the offensive line, the impact of Young’s ejection and others, but there is one thing we will never be able to second-guess about this team and that is its resolve.

A lot of college football teams across the country would have had a hard time bouncing back from an opening week loss to a Sun Belt team, especially in the year 2020 when the COVID-19 pandemic made it awfully easy to lose sight of your goals and get distracted.

Not this Cyclone team, though. They just kept fighting and responded by winning eight of their next nine games and finishing atop the Big 12 regular season standings for the first time in school history.

While the ranks of their doubters grew week-by-week as their ranking went higher and higher, this team just continued to work. They continued to grow and improve, striving to be the best version of themselves.

“The fight that our team has inside of them is something great to look at, and I know it’s great to watch,” junior receiver Xavier Hutchinson, who posted 10 receptions for 114 yards in the loss, said. “To be honest with you, just to be a part of it is great. Our team never gives up. One of our mottos is never die easy. And I think you guys kind of saw that today, and I’m glad that the world got to see that today too; that no matter what predicament we’re in, we’re never going to die easy in a football game because we can always make a comeback. Today we just fell a little bit short.”

The motto Hutchinson mentioned there — never die easy — is the first line of a Walter Payton quote.

“Never die easy. Why run out of bounds and die easy? Make that linebacker pay. It carries into all the facets of your life. It’s okay to lose, to die, but don’t die without trying, giving your best.”

Could there possibly be a better way to describe the 2020 Cyclones?

That’s because this team refused to take anything laying down.

They looked at the history of Iowa State football, and its status as one of the country’s most tortured programs — and — figuratively — spat in its face, instead focusing on changing the nation’s perception of what it means to play Cyclone football.

Folks around the country might not always remember this Iowa State team as a special one, but we will. We will remember the great moments, the breathtaking plays, the moments of anxiety exploding into celebration and the pure joy they gave us during one of our darkest years.

“The feeling around our whole season is incredible,” Hutchinson said. “What happened today, we are going to go down in history as one of the best Iowa State [teams] to ever come through here. So just to hold that, that’s a great feeling.”

We can all learn something from the Cyclones. No matter what you’re faced with in life, refuse to give into it. Keep fighting until the clock hits zero and give it your all ever second.

You might come up short sometimes — and that’s okay. One of the tough realities of life is you can’t win them all, but you can always keep trying.

Iowa State football bought into that mentality in 2020 and gave us one of the greatest periods of joy in our school’s recent memory. They came up just short this time, but year No. 109 since the last conference title has the makings to be a special one, too, ya know?

“Well, I think from our deal — and I’ve said this a lot in our program — is this is not a results-oriented football program. I think we’re result aware, outcome aware, but I also really believe that the investment of our leadership team from our coaches to our players is process and really culture-driven,” Campbell said. “And when you live like that, then you don’t reside in the highs and the lows of what the scoreboard tells you or what, you know — and I get it, it’s your job to write articles, and what the press tells you or what mom and dad tell you, what you become is you become the best version of yourself you can be. And I think there’s no question, at the end of the day, this football team has become the best version of itself it can be, and that’s really hard to do in our sport. It’s really hard when you’ve got 18- to 22-year-olds, really hard in a year like this.”

It is hard to imagine this program going anywhere regardless of the result in this game.

The 2020 Cyclones won’t be remembered as conference champions, but I already know one thing that we will never forget about this group of fighters who became the best version of themselves and showed it week-after-week through the entire fall. 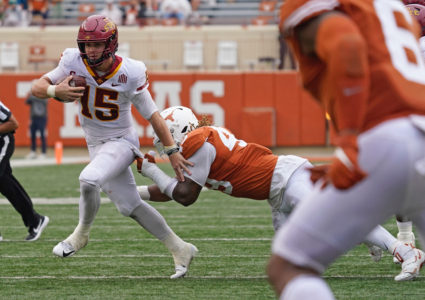 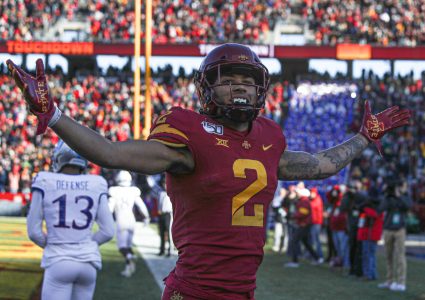 STANZ: “It’s our only chance.” 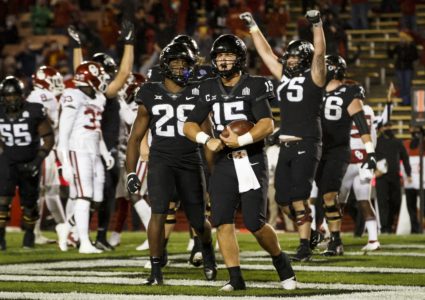