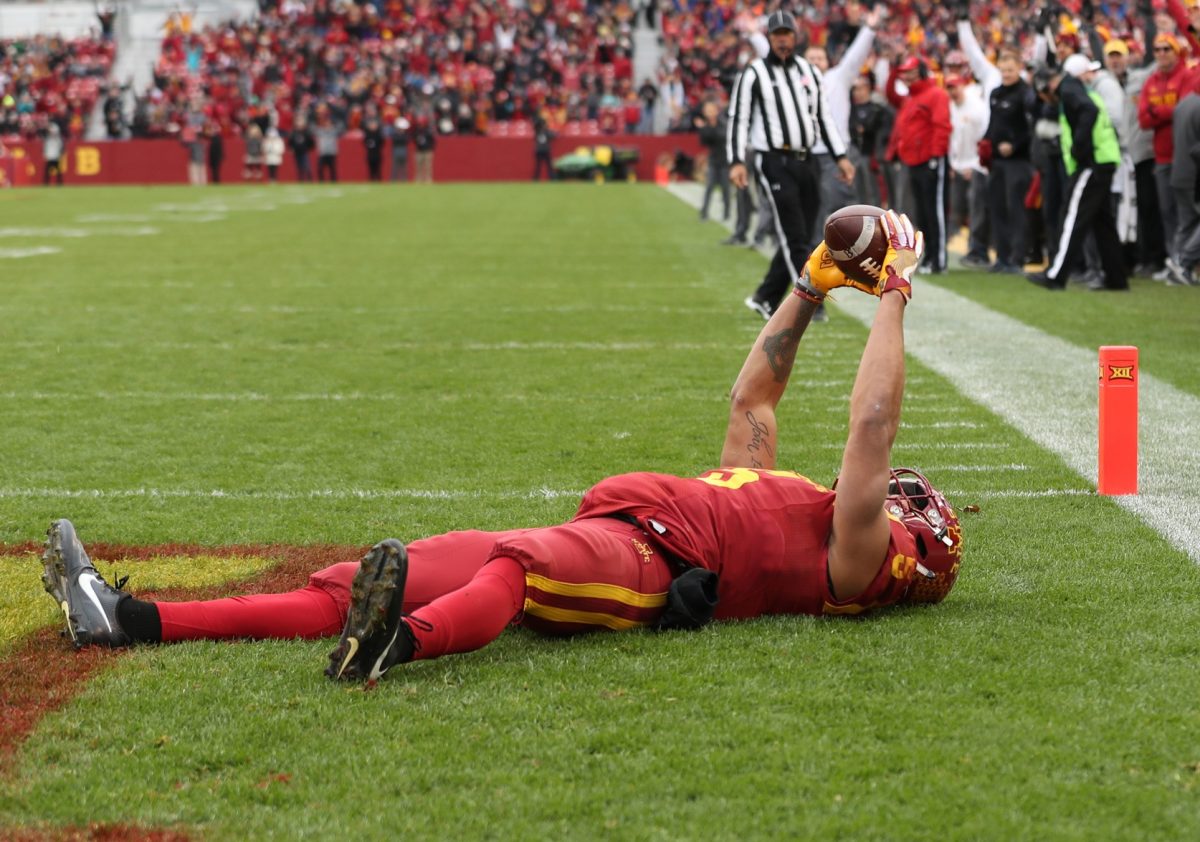 ***The following is a news release from Iowa State Athletics Communications:

IRVING, Texas – The Big 12 football coaches selected their All-Big 12 teams this afternoon, and 20 Cyclones were awarded postseason honors for their performance on the field in 2017.

A native of Urbandale, Iowa, Lazard is the greatest receiver in Iowa State history, ranking No. 1 in career receptions (231), receiving yards (3,218) and 100-yard receiving games (11) in the Cyclone record book.

The senior has had another fantastic season, leading the team in receptions (61), receiving yards (799) and touchdown receptions (9). His nine touchdown catches is tied for first on ISU’s season record list and his 61 catches ranks sixth.

Cotton-Moya, who hails from Bakersfield, Calif., led the Cyclones in interceptions with three and had 60 tackles and 3.0 tackles for loss. A second-team All-Big 12 recipient in 2016, Cotton-Moya is ISU’s active leader in tackles (250) and interceptions (5).

Montgomery, a native of Cincinnati, Ohio, was second in the Big 12 in rushing at 91.2 yards per game. Montgomery, who led the nation in forced missed tackles (104), rushed for 1,094 yards on the season, ranking 17th on the school’s single-season list.

The sophomore had six 100-yard rushing games and tallied 11 rushing touchdowns to tie for second in the league.

Lanning, a native of Ankeny, Iowa, is one of the best stories in college football. The senior switched to linebacker for his final season, ranking second in the Big 12 and 31st nationally in tackles per game (9.2). He ranked second on the team in tackles for loss (10.0) and third in sacks (5.0).

Lanning’s versatility has made him a strong candidate for the Paul Hornung Award, given annually to college football’s most diverse football player. Lanning, who ranks third on the team in rushing (115), is the first player since 2006 (Eric Weddle, Utah) to record a sack, interception, fumble recovery, passing TD and a rushing TD in a season.

Peavy has established himself as one of the league’s best cornerbacks. The junior from Houston, Texas leads the team in takeaways (four) and is third on the team in tackles (81). Peavy also has 6.0 TFL, two interceptions and seven pass breakups on the season.

Waggoner is one of ISU’s biggest success stories of 2017. A lightly recruited player out of high school, Waggoner molded himself into an all-conference player through hard work and determination.

The Dallas, Texas native led the Cyclones in tackles for loss (10.5), tying for 10th in the Big 12. He led all ISU down linemen in tackles with 38, tallied 2.5 sacks and credited with a forced fumble and fumble recovery.

Campos was ISU’s anchor on the offensive line that helped pave way for a 1,000-yard rusher and guided an offense that averaged 29.9 points per game, the second-best season average in school history.

Allen, a redshirt freshman from Nixa, Mo., has a bright future at the tight end spot for the Cyclones. He caught four passes for 39 yards.