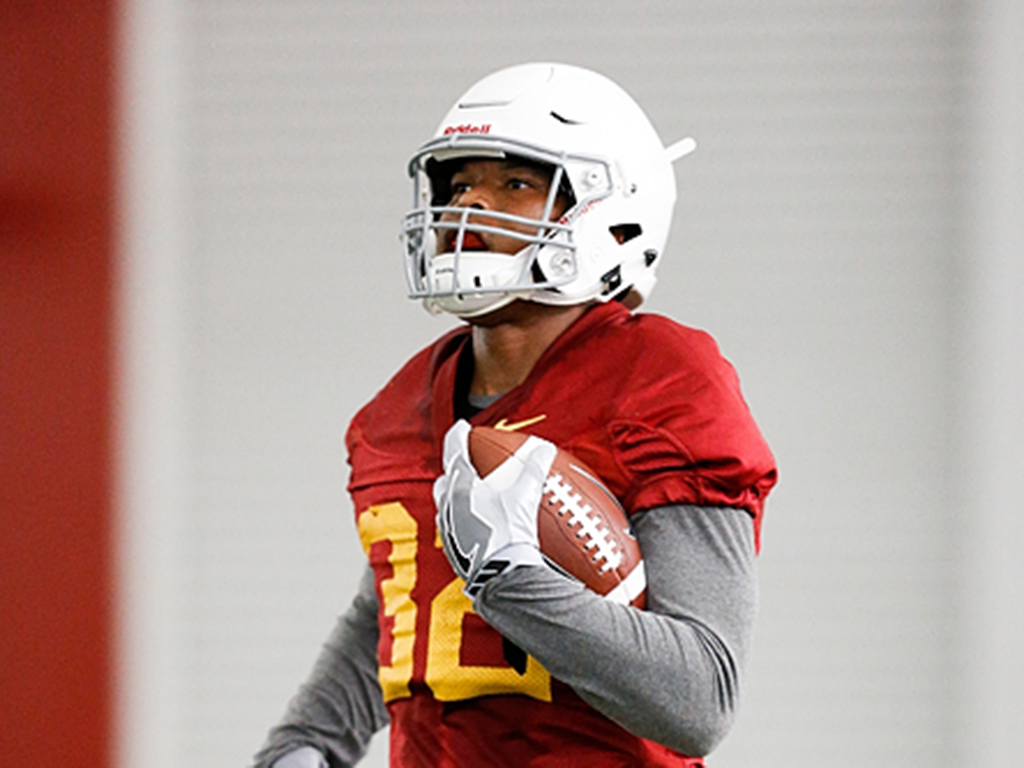 His actions continue to mirror those encouraging words.

“I really give both of them credit and I think this is, hopefully, a reflection on where our culture and where our program is really growing,” Cyclones coach Matt Campbell said between two segments of open practice Monday. “Here’s two guys that are competing for playing time. It was certainly — it was a storyline last football season, in both regards.

“I think what happened is David and Michael, really credit to both those guys, now not only are they teammates, but they’re almost best friends. They’re inseparable. That really started from when we came back in the winter and a lot of credit goes to both those guys — (A), Michael, to have a little bit of the humility to take David in and accept him, and then David having the willingness to say, ‘Hey, listen. Let’s work at this thing together.’”

Warren burst onto the Big 12 scene in 2015, rushing for an ISU freshman-record 1,339 yards and churning up freshman All-America honors from The Sporting News.

He seemed poised for even bigger things last season — until Montgomery simply beat him out midway through it.

It didn’t help Warren’s hopes that he also struggled with injuries while totaling 559 yards and three touchdowns on the ground last season. Montgomery rushed for 563 yards and two scores — but averaged 5.2 yards per carry to Warren’s 4.2.

“Both those guys have been really fun to watch,” Campbell said. “What they’ve done is push each other, but yet they’re there for each other off the field and I think that’s really resonated with our football team.”

“I think the biggest thing for him is his development,” Campbell said. “There’s so much competition between tight ends, our skill players, our running backs (for the) ball — and there’s only one. The nice thing is that sometimes the defense dictates it when you certainly have guys that are capable at every position. The defense dictate where that ball goes, so I think that’s the one thing we’re really excited about is having Chase and certainly Sam Harms and some guys that are capable at that tight end position now to not only block and create edges for us in the run game, but also be threats for us in the passing game when people leave the middle of the field open.”

Allen endured painful bouts with bad luck during his true freshman season. He was struck by a car as fall camp was set to begin. He walked away, but required 103 stitches. Allen also battled illness and eventually it became clear that he would have to redshirt.

That was not the initial plan, obviously, but Allen’s used the setbacks to pave a path toward making a stronger impact this season and beyond.

“I think that’s one of the really unique things about Chase and it’s, again, when you go to recruit and you talk about guys that have a great understanding of the game, and certainly Chase’s background with his father (Terry), and growing up as a football coach’s son, you have, I think, a learning curve that’s a lot faster than maybe the common player,” Campbell said. “His trajectory (last year) was to play, if he hadn’t gotten hurt and certainly hadn’t gotten sick even after getting hurt, so I think what Chase was able to do was to take that time and instead of being frustrated not playing, was say, ‘How can I continue to learn and grow in this offense, so when I do have my opportunity, my learning curve is even shorter than it would be.’ He’s really done a great job. I really look forward to Chase because I think he can be a great asset to what we do offensively.”

Times have changed for the hulking JUCO transfer offensive lineman, who’s slated to start at right guard for the Cyclones this season.

“Night and day,” Campbell said about the 6-3, 317-pound junior’s personal makeover. “‘A,’ he’s in shape, which, a year ago, I think he was just trying to get himself into shape. Again, you’re talking about a guy who didn’t get here until late May and Oge is one of those guys that was probably the biggest surprise in terms of the offensive and defensive line. He’s big, he’s strong, he’s physical — and here’s a guy that didn’t play high school football until his junior year in high school, so it’s not like he’s been playing football his entire life. So I think you see the strength and the confidence and his raw, natural ability really starting to come out and I think every day in the spring, you saw him get better and I’m hoping that same progress goes to the fall, because if it does, I think it could be a really special career for him.”