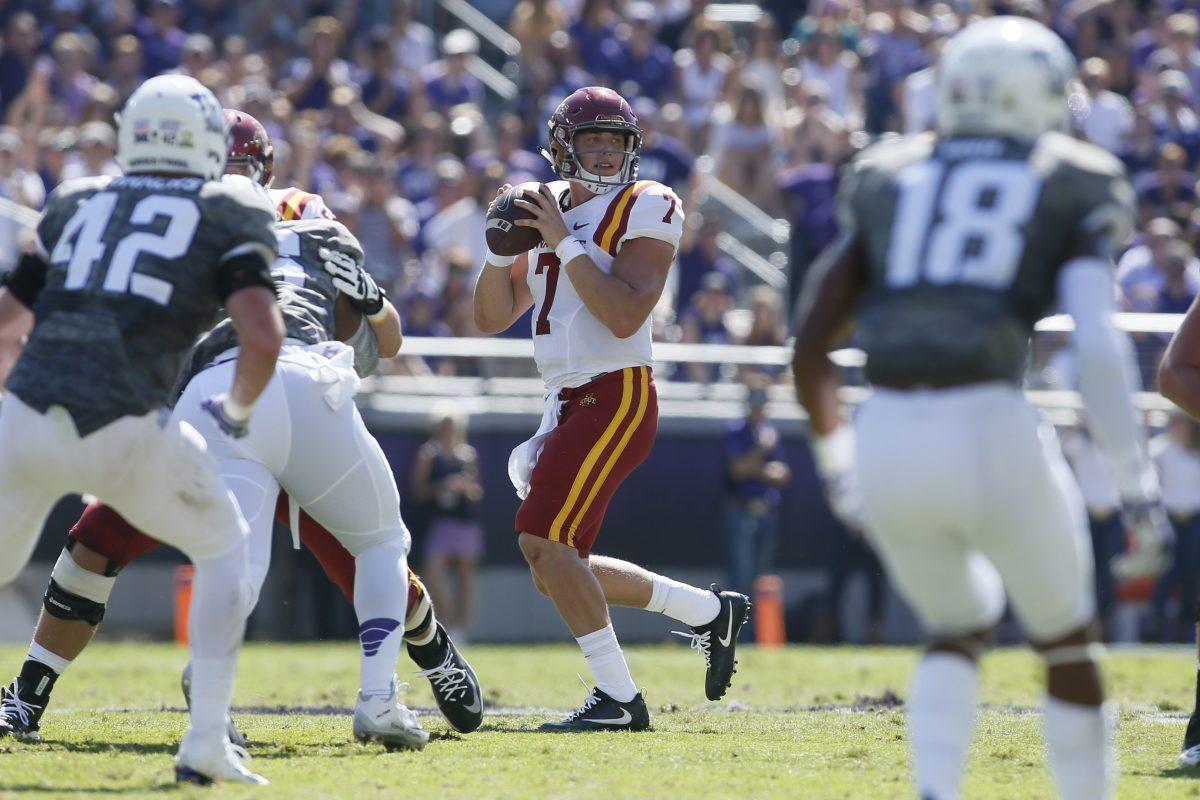 We now know the answer to the question, “Joel Lanning or Jacob Park?”

Saturday, it was both, but the carousel may be (stay tuned) spinning with more clarity.

Lanning started and finished — though Park saw plenty of time on the field — as Iowa State absorbed a 41-20 setback at TCU.

Lanning completed 12 of 21 passes for 127 yards. More notably, he rushed 11 times for 31 yards, including touchdown runs of 8-yards and 1-yard. He also commanded the offense on a drive for a field goal.

Park went 7-for-15 passing for 90 yards. He helped the Cyclone tack on a late field goal as they fell to 0-3 overall and 0-1 in Big 12 play at sparsely-populated Amon G. Carter Field.

“This is not the prettiest college football game,” Fox Sports One play-by-play man Joe Davis intoned late in the third quarter.

But the Cyclones did show some signs of progress as the program’s rebuild lurches toward week four and a home date with San Jose State.

Glimmers of hope merged with another yet another dose of reality.

Not as many — but still ill-timed penalties — cropped up. Dropped passes (mostly) replaced errant throws.

Still, the offense did score its first touchdown since the season-opening loss to Northern Iowa.

Preseason All-American tailback Mike Warren had his best day of the season (95 yards on 23 carries), and Lanning once again became a punishing runner, barreling eight yards for a touchdown to cut TCU’s lead to 10-7 with 12:18 left in the first half.

Oh, and Deshaunte Jones emerged as a big playmaker — especially on a 41-yard catch and run to the TCU 7-yard line after the game was long decided.

So improvements were made, but not enough to remotely make this a ball game.

The Horned Frogs (2-1) responded to Lanning’s touchdown by forging an 11-play, 71-yard scoring drive that included barely making it on fourth-and-one at the ISU 20. An iffy at best unsportsmanlike call on ISU corner Jomal Wiltz aided the drive, which ended in quarterback Kenny Hill’s short touchdown run.

TCU then forced a three-and-out — and ISU’s defense did the same, but again couldn’t convert a first down on offense in the ensuing series.

The Cyclones crossed midfield in the closing moments of the first half, with Park connecting with Trever Ryen for a 32-yard gain to TCU’s 41, but a sack followed — along with a drop by Darius Lee-Campbell that would have given ISU a first down inside the Horned Frogs’ 20. Instead, the Cyclones turned it over on downs and went into halftime trailing, 24-7.

TCU padded its lead on the first possession of the second half, going up 31-7.

ISU answered with one of Cole Netten‘s two field goals, but the Horned Frogs closed the Cyclones out with a quick-hit touchdown drive that took all of 1:08 second off the clock.

Lanning tacked on a one-yard touchdown helped by an Allen Lazard block.

The Cyclones — who started the season 0-3 for the first time since 1997 — suffered their 10th straight conference road loss, dating back to the stirring, Grant Rohach-led 52-44 comeback win over West Virginia in triple-overtime to close the 2013 season.