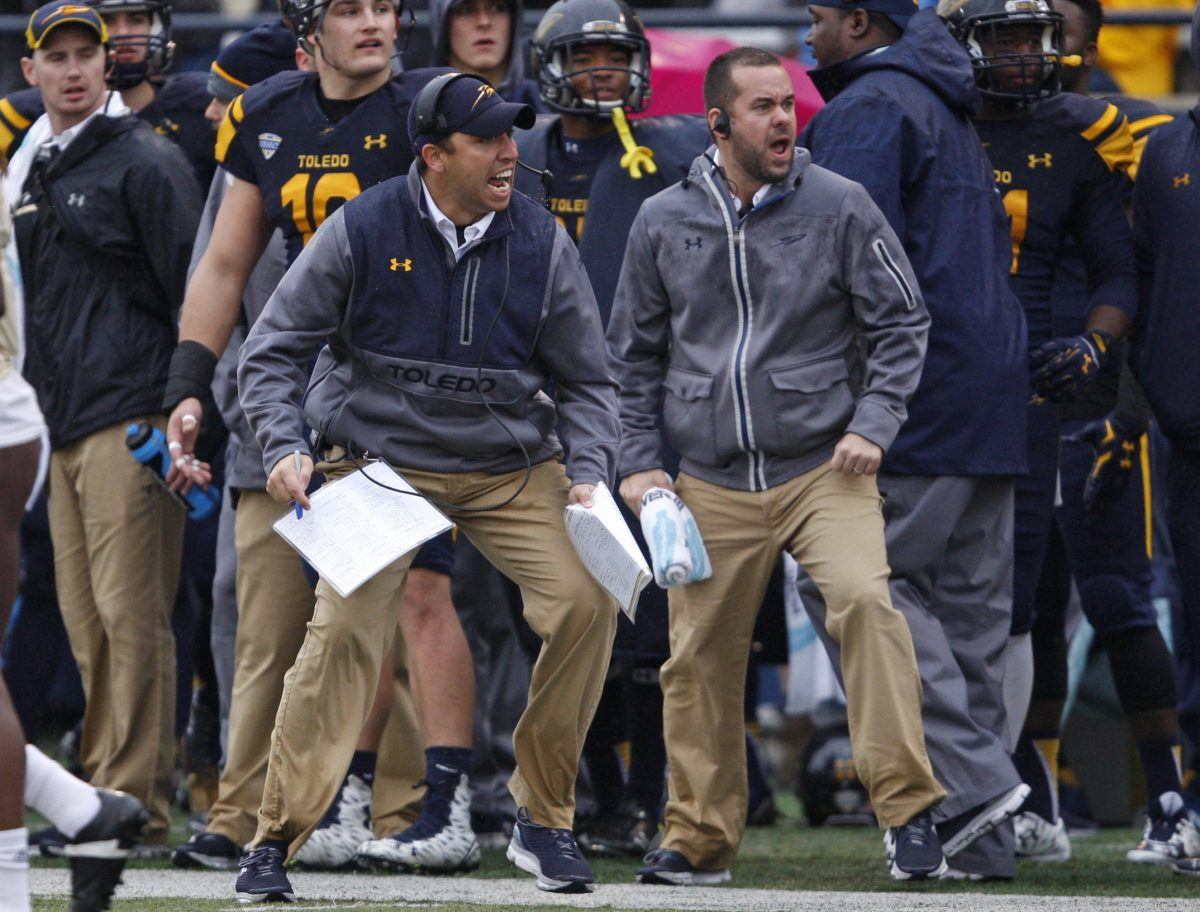 AMES — Joel Lanning heard the laughter, then craned his head inside the door frame to discover its source.

Seems some ISU coaches were giving recruiting coordinator and tight ends coach Alex Golesh a hard time — and the guffaws and good spirits radiated through the hallway.

Laughs? From a new, but uncommonly tightly-bound staff leading a team coming off an underachieving 3-9 season? Yup.

“Everyone jokes with this coaching staff and they joke with us,” said Lanning, who threw 10 touchdown passes to four interceptions while becoming ISU’s starting quarterback last season. “It’s almost like we’re all like brothers. That’s how it needs to be on the staff. It’s great to see that. There’s always someone giving some type of coach some sort of crap and they’re giving us crap about something. It’s fun to have that and our relationships are going to slowly keep building and we’re going to be a very tight bunch pretty soon.”

The coaches already are.

“It stood out from the jump,” said budding star cornerback Brian Peavy. “Just through the meetings and how they interacted with each other, you could tell they had a bond together. From team dinners, everybody’s sitting together, everybody knows each other’s family.”

Peavy noticed something else, too. Something a bit peculiar, but welcomed.

“When the O-lineman coach wanted to know more about you and the running backs coach and the receivers coach — it did,” Peavy continued. “It stood out.”

How all these coaches converged in Ames serves as proof that both randomness and order serve as the laws of the universe.

Assistant head coach Lou Ayeni — who first met Campbell while he was a graduate assistant at Northwestern — already had joined the Cyclones’ staff as its running backs coach in 2014. Golesh had spent the past four seasons at Illinois after joining then-Toledo coach Tim Beckman in Champaign-Urbana.

Factor in quarterbacks coach Jim Hofher — who Campbell studied under as an assistant at Bowling Green — being willing to join the band in Ames, and it’s clear a rare confluence of events led to this cardinal and gold-hued coaching reunion.

“I had always kind of thought, “Man, I miss those guys. Those are my guys,’” said Golesh, who has been integral in Campbell’s first two recruiting classes, which currently rank 52nd and 41st, respectively, according to 247Sports. “And in this profession, you don’t have a bunch of time to just sit there on the phone and network. You really have time to do your job. And coach Campbell was the one who always told me, ‘Do the best at your job. Do the best job at the job you have.’ Because as a young guy, you’re always all over the place. So, just do the best job at your job and it will always work out. When I got the call from Matt, shoot the night before I coached my last game at Illinois, it was like I’ve told some people, I didn’t know where we were going, I just knew we were going to have an opportunity to go. And I told Matt after talking to my wife — she didn’t ask where we were going. She’s just, ’Matt’s going somewhere, we’re going with him.’ Surreal maybe little bit.”

Maybe destiny. Maybe coincidence. But choices were made amid the chance-filled, shifting set of circumstances.

Chaos is another word for opportunity — where bold ideas, both good and bad, meet; some embraced as genius, others rejected as bunk.

Test, test and test some more. Campbell’s tinkering with a chemistry set and he does it well.

“I think the one thing that we all bring to the table is that, yeah, we’re all really close in terms of what we are because I think it’s what we stand for as people,” said Campbell, who added that’s it’s too soon to know if 2016 will bring the planned-for turnaround after a grand total of seven wins in three seasons. “But I think there’s also a lot of differences. Difference in personality. Difference in leadership styles. But I think that’s really good and it’s something that I want.

“I said that earlier. I don’t want guys that are just ‘yes men.’ Guys that are going to nod their head and say, ‘Yeah, coach. You’re doing it the right way.’ Because you know what? I’m 36 and some of those ideas that I have might not be the best idea. Why? Let’s debate those and let’s talk about those and then let’s leave that room. But when we leave it, let’s all be on the same page and know that my goal is whatever choice we make, it’s the betterment of our football program. And I appreciate the respect that our guys have given me over time to say, ‘Yeah, I trust you to make the best decision — whatever it may be, and maybe I don’t agree with it’ — being in the best interest of the program.”

“That’s where it starts with us,” he added.

Mount Union is where it truly started — for Campbell and for Manning — under legendary head coach Larry Kehres.

Campbell starred as a defensive end on three Division III National Championship teams. Manning starred on the Purple Raiders’ offensive line, winning national crowns in his freshman and senior seasons. Campbell was his teammate for the 2002 championship. Campbell was Manning’s position coach for the 2005 title.

“It’s kind of crazy we had that opportunity to put it together,” Manning said of the move to ISU in in early December. “We didn’t really hesitate. I think we knew where we were going with it right away and I think we were able to get most of that together in a day and a half.”

Ayeni watched from afar — and right here in Ames — after being fired for the first time in his life. He heard rumblings about possible new head coaches. Campbell, of course, among them.

Conflicting emotions roiled within the man who helped mold Mike Warren into the nation’s best freshman running back. He had been close to many of his fellow coaches on Paul Rhoads’s staff. While they were adrift, he found a lifeline.

“We’re going through that process and all of a sudden (athletics director) Jamie (Pollard) talks to (Campbell) and he likes it, he wants to come and you go from being at the bottom of that spectrum to the top of the spectrum, being just as excited as all get out, because just being with him those four years at Toledo, we did so many great things,” Ayeni said. “You just know in your heart we’re going to do those things here. We’re not there yet, but we’re moving towards it, and we’re getting better and it’s a lot of fun There’s a lot of excitement in the program, a lot of excitement during fall camp. We’ll get to Saturdays and we’ll see where we’re at, but I think we’re on the up and up and I’m glad to be a part of it.”

Dramatically better recruiting rankings don’t necessarily improve things much. Laughter might be the best medicine, but its impact on third-down conversion rate and turnover margin is negligible.

Bonds don’t break, however. Commitment steeped in mutual respect is hard to chip away. Humble beginnings turn daunting tasks into smile-inducing challenges. You don’t shrink from them. You try to rise high above — this time at the power-five level.

That’s why Manning touched Campbell’s shoulder early on after moving to Ames. They’d come so far and have so far yet to go. They were buckled in plane seats, sharing a cabin, flying out to make their new football team’s future brighter — and the scene struck Manning.

Hell, it struck (and connected) all of them as they nodded their heads and shared a quick laugh.

“We’re just a bunch of regular guys, man, and we’re on the private plane to go to a recruiting event,” Manning said. “I kind of reached over to coach Campbell and coach Golesh and said, ‘Listen. If we ever stop thinking that this is really cool, we’re in a lot of trouble.’ We kind of got a little chuckle out of it, but the truth of it us that for us it’s kind of a reminder of, ‘Listen. Here’s who we are. We got to this place — and it’s such an incredible place, but we got to it by being who we are and believing in what we do. Let’s never let that change.’” 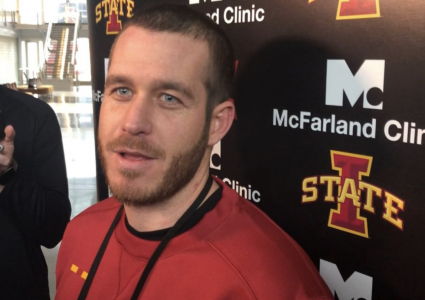