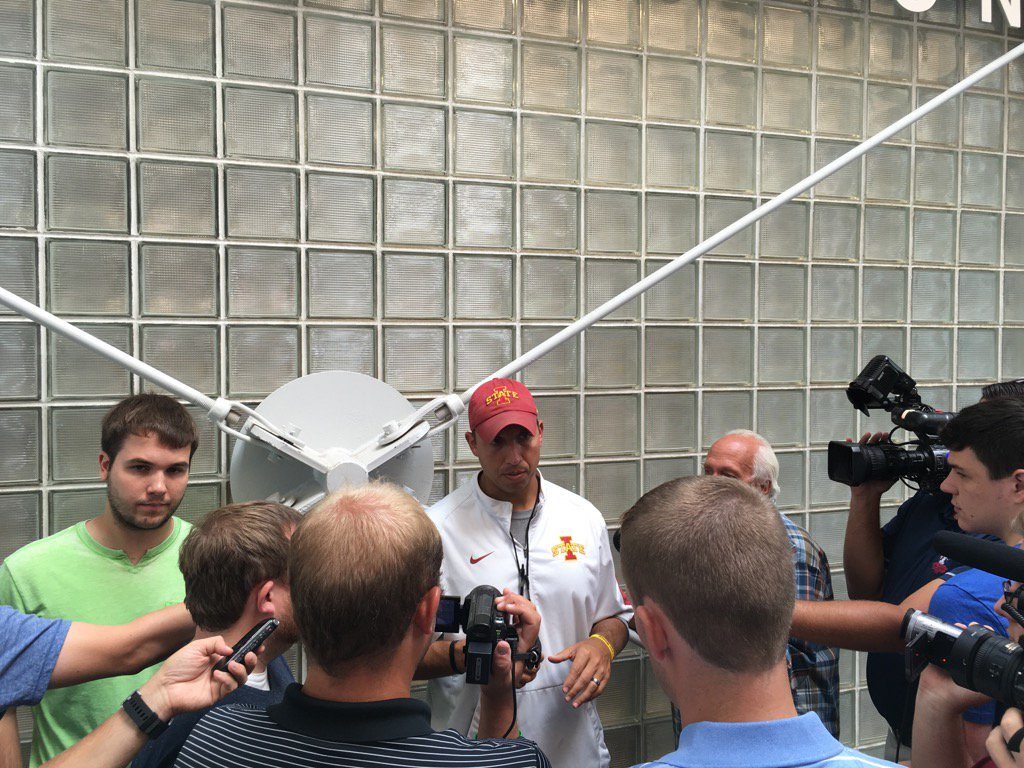 AMES — For the first time since announcing that junior right tackle Jake Campos would likely miss the entire 2016 season, first-year Iowa State head coach Matt Campbell spoke to the media for the first time on Tuesday morning and his message was very clear: There’s no panic inside of the Iowa State football program.

“On Sunday night, it was sympathy,” Campbell said about his conversations with Campos. “On Monday morning before he got out of the hospital, I said ‘Get your butt out of bed and get back to practice and start coaching everybody. You are the guy that has experience and has provided really good leadership for our team since you weren’t practicing in the spring.’”

That’s where Iowa State is at currently with the season looming 18 days away. The Cyclones – led by Campbell and offensive coordinator Tom Manning – are moving forward.

A sliver lining: Campos missed the entire spring, which allowed guys like redshirt freshman Julian Good-Jones to get plenty of reps all across the line.

“There are so many guys who are playing multiple positions,” Campbell said. “We have been mixing and matching since we got here. It allows us to handle this situation so it isn’t panic mode in our locker room or within our staff. I feel bad for the kid but this is football and we have to be able to handle this.”

Campbell clarified that Campos suffered a broken leg during Sunday’s scrimmage and had surgery on Sunday night. He also noted that while the position is still fluid, Good-Jones is the current leader to replace Campos at right tackle.

The anchor of the line now comes up the middle. Minnesota transfer Brian Bobek is currently taking first-team reps at center. The coaches love him. Beside him, Patrick Scoggins and Nick Fett have a strong hold on the guard positions as well.

“He’s (Scoggins) been the guy who has been really from spring practice through fall camp, he has been the anchor and allowed us to mix and match some of those guys,” Campbell said. “He has played really good and Nick Fett on the other side has played really good. To me, that’s huge. I think we feel really confident in the ability of what we have and who we have to play up the middle for us.”

*** Will Campos get a medical redshirt if he misses this season? Campbell says it is too early to say.

“We’ve talked about it a little bit but have we really gotten to it? We haven’t,” Campbell said. “And it’s unfair for me to even make a comment because what I would be stating would not be fair.”

*** True freshman running back David Montgomery did not scrimmage on Sunday due to an “ankle tweak,” but Campbell said it was strictly precautionary. Montgomery has been really good so far in camp and sources say has a legitimate chance to play.

*** When asked about offensive standouts, Campbell was quick to note on the wide receivers, specifically at the slot.

“The guys who has really opened up everybody’s eyes and has had as good of a camp as anybody is Deshaunte Jones,” Campbell said of the true freshman. “That’s a guy who played quarterback at a division one football school, maybe the best school in Ohio. He’s been impressive for us and is a guy who is right in that race. Marchie Murdock is a guy who has played the slot and we have moved him around and gives us a lot of flexibility as well.”

Of course, Campbell mentioned Trever Ryen as a standout as well.

*** Iowa State running backs coach Lou Ayeni noted that Sam Seonbuchner has moved from defensive end to the “F” position on offense. It sounds like he will be used primarily as a blocker going forward.