McCarney wanted Flynn as a top-flight quarterback — and he planned to seal the deal neatly, smoothly, and completely.

“I’ll never forget, I was sitting in an office like this and he says — I think it was Sunday, after the visit — so what’s wrong? Anything wrong with this place?” the coach asked his pupil. “Well let’s go ahead and make this official.’ And I had three other visits lined up. I think you could take five then. So I said, ‘Yeah, I probably just want to go home and talk to my parents — just trying to find an excuse to to kind of get away. Coach McCarney, I tell you, he’s one of the best, in my opinion, one of the best recruiters that I’ve been around.”

McCarney didn’t relent. He grabbed the phone and got mom on the line — and on speaker. "Whatever you want to do," she eventually said. Flynn committed that day.

Welcome to the Big 12, Austin Flynn. Your offensive line will be decimated by injury, and you will eventually face a position change after a 2-10 season. Imagine the sting. You followed Sage (Rosenfels) and Seneca (Wallace). A year from now, you’re holding a clipboard, the backup to Bret Meyer. There’s promise at ISU, though — and beyond.

“I guarantee it makes him a better coach having played quarterback and receiver and having gone through those trials and tribulations of not getting the starting job and having to eat some humble pie,” former Cyclone great Lane Danielson said. “That’s for the team, and he’s a team guy.”

Flynn was a coveted recruit. Perhaps a 4-star guy, based on past performance. Regardless, he was a stud. His passing/receiving numbers?

Either way, Flynn was a star by ISU standards.

“That first year, he was really running with the wolves,” former Cyclone linebacker and Grand View Defensive Coordinator Joe Woodley said. “I watched him run a meeting room (as a coach), and a coach’s room. I was just really impressed.”

Flynn never second-guessed his commitment, though his offers list included nearby (Oklahoma State). McCarney played a leading role in ensuring Flynn remained locked in, but Flynn continued to be his own man.

Imagine the sting (again). After holding a clipboard — you’ll reunite, catching well-placed passes from Meyer. That worked out, too. Flynn led all receivers with 56 catches in the 2005 season, and showed a willingness to fly across the middle of the field.

“What a great player for Bret Meyer to rely on across the middle,” said Danielson, who hosted Flynn on his official visit and likely helped McCarney with intel as he hade the closing pitch. “He had (Todd) Blythe on the outside. To have somebody who had the mentality of a quarterback — and Austin had the hands to go across the middle, and the toughnesss… Austin is resilient.”

He could trash-talk, too. Once Flynn became a key cog in ISU’s offense again, he didn’t mind mixing it up verbally with defensive backs. Enjoyed it, actually. His journey had come full circle. He was contributing again — and loving every minute of it during a season that ended with a bowl trip back in Houston.

"I was probably known in that receiving group as the one who talked the most trash," Flynn said. "I don’t know how that transition happened. Maybe it was just, ‘Hey, I’m changing to receiver and I’ll try something else new.’ But it was fun. I enjoyed it out there. … We had a good group."

Flynn lives in Ankeny, while striving to lead the Vikings back to the NAIA playoffs — and another possible title (and first since 2013).

Grand View’s become a perennial NAIA power since head coach and former ISU assistant Mike Woodley built the program from the ground up. Flynn’s enjoyed being part of that ride.

Flynn said he hopes to one day coach in the Division I ranks, which he of course played in at the highest levels, thanks to his adaptability. But Grand View is home — and he’s turned down job offers in the past to remain part of something special there.

"All the players really respect him, because he treats them right,” Mike Woodley said. "Very humble.”

Flynn remains that way. His coaching influences are many — from mom and dad to ISU assistants such as Todd Fitch and Barney Cotton, as well as the Woodleys. Then there’s the closer, Dan McCarney, who wouldn’t let Flynn hop on a plane without committing on that fateful Sunday.

"I loved playing for him," Flynn said. "Tremendous respect for him." 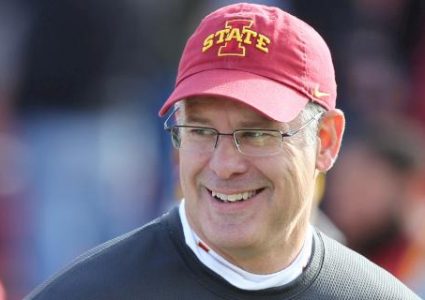