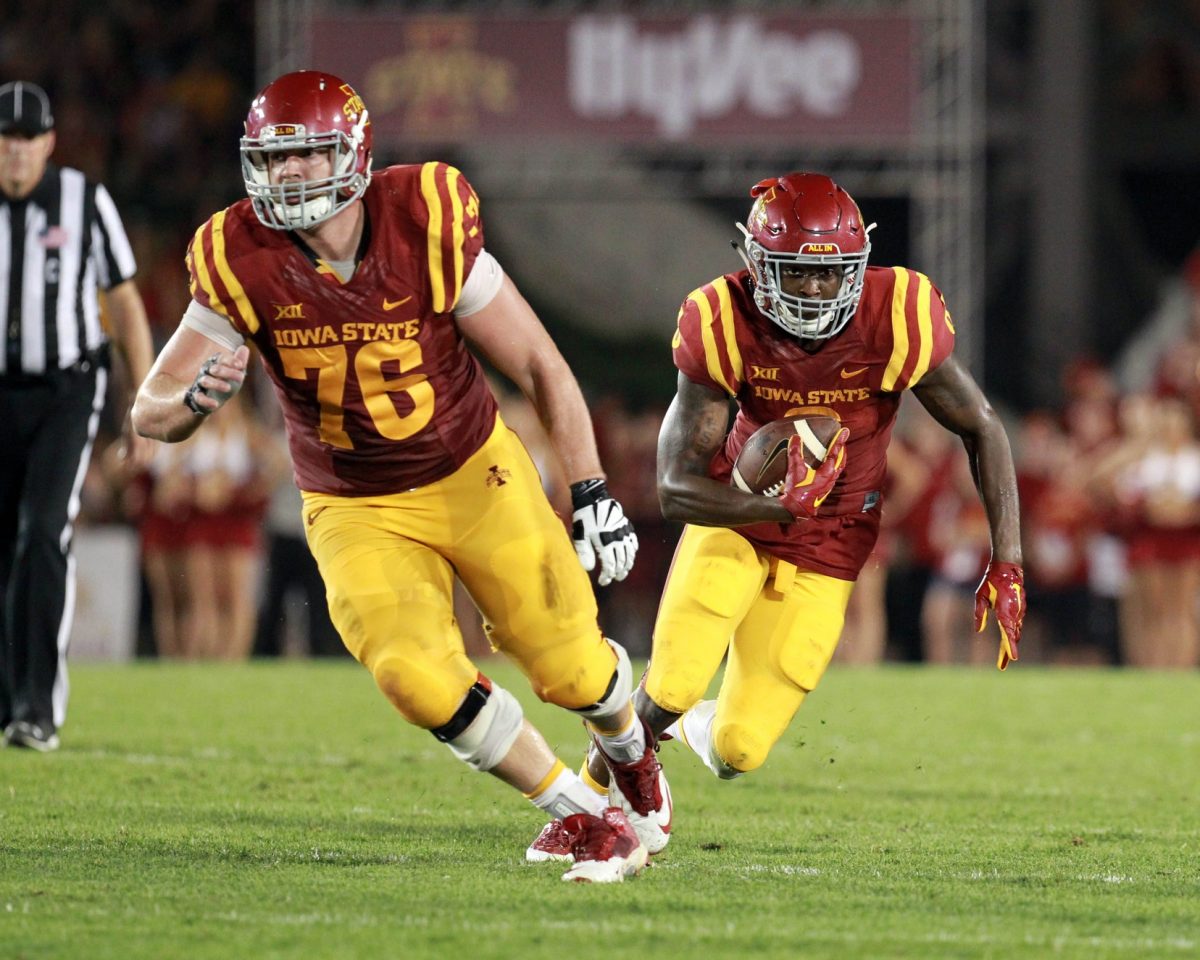 The 6-foot-6, 304-pound fifth-year senior not only makes the calls along the offensive line, helping to spark the Cyclones’ resurgent running game.

He’s a devoted husband — and soon will be a loving father.

“We’ve heard the heartbeat and everything,” said Lalk, who learned his wife was expecting their first child five weeks ago.

Before ISU, Lalk starred on the offensive line at Council Bluffs Abraham Lincoln. His spouse attended cross-town rival Thomas Jefferson. They met at a church function. She’s a nurse. He’s got a bachelor’s degree in Biology.

Fixing and figuring out things is part of their DNA. So when junior college transfer Patrick Scoggins went down early in fall camp with a season-ending knee injury, Lalk became the go-to ball snapper.

But the job entails much more than that, as the guy he used to spell, Tom Farniok, showed.

“It helped,” Lalk said of the standard Farniok set. “I was with him for four years and really got to see what a good center has to do to put everybody on the same page and make calls that you need to make.”

Lalk’s calm, mature leadership on the line has laid the groundwork for a running game that enters Saturday’s 2:30 p.m. Big 12 game at Texas Tech on a roll.

The Cyclones (2-2, 1-0) could churn out a third straight game of 200-plus yards on the ground for the first time since the 2009 team racked up similar numbers five times in a row.

The Red Raiders (3-2, 0-2) allow a staggering 277.4 rushing yards per game this season, which presents the offense with another opportunity to build momentum in the trenches.

“I think one of the big things is we’ve kept it balanced,” Lalk said. “I think the first couple games we got really pass heavy and we were relying too much on the pass because we just weren’t getting the run game going. Now that we’ve got the run game going, we’re a lot more dangerous that way because the defense doesn’t know what’s coming. So knowing that we’ve got that going, we’re a lot more confident now.”

Lalk, ISU coach Paul Rhoads said, has “probably” exceeded expectations as a now full-time center. He swiftly established rapport and authority as the de facto captain of the line, and it’s starting to show.

“He’s got very good intelligence and understanding of what it is we’re doing,” Rhoads said. "Knows when to ask a question to make sure we’re going to be sound with what we are. He’s got the respect of his teammates and that’s something he fought hard to earn being in the shadow of Tom for all that time.”

It helps that Mike Warren’s come into his own out of the backfield. The talented redshirt freshman could eclipse the 100-yard mark for the third straight time — becoming the Cyclones’ first back to do so since Alexander Robinson did it in 2010.

“The thing about Mike is he’s got great vision,” Lalk said. “It’s unbelievable when you watch him on film how easily he sees his cuts and where he has to be and how the linebackers and defensive lineman are playing and everything.”

Lalk and his cohorts on the line point — and plow — the way.

Led by a husband and soon-to-be father. A devoted son, too. Lalk’s mother, Lori, has been battling cancer. Roughly one week before he found out he’d be a dad, he learned she was cancer free.

“She got done with chemo about a month in a half ago and she’s doing great,” Lalk said.

Life. Football. Joy, pain and growth.  Count the yards on Saturday. They’ll form only a small fraction of the length — and substance — of Lalk’s journey.

“It’s amazing,” Lalk said. “I never would have thought all this stuff would have happened five years ago but it’s like, zoom forward, here it is and I’ve got a baby on the way and mom’s been through a lot. Life just happens really fast and it’s a roller coaster, but it’s been great.”

Scoggins out for the year with knee injury