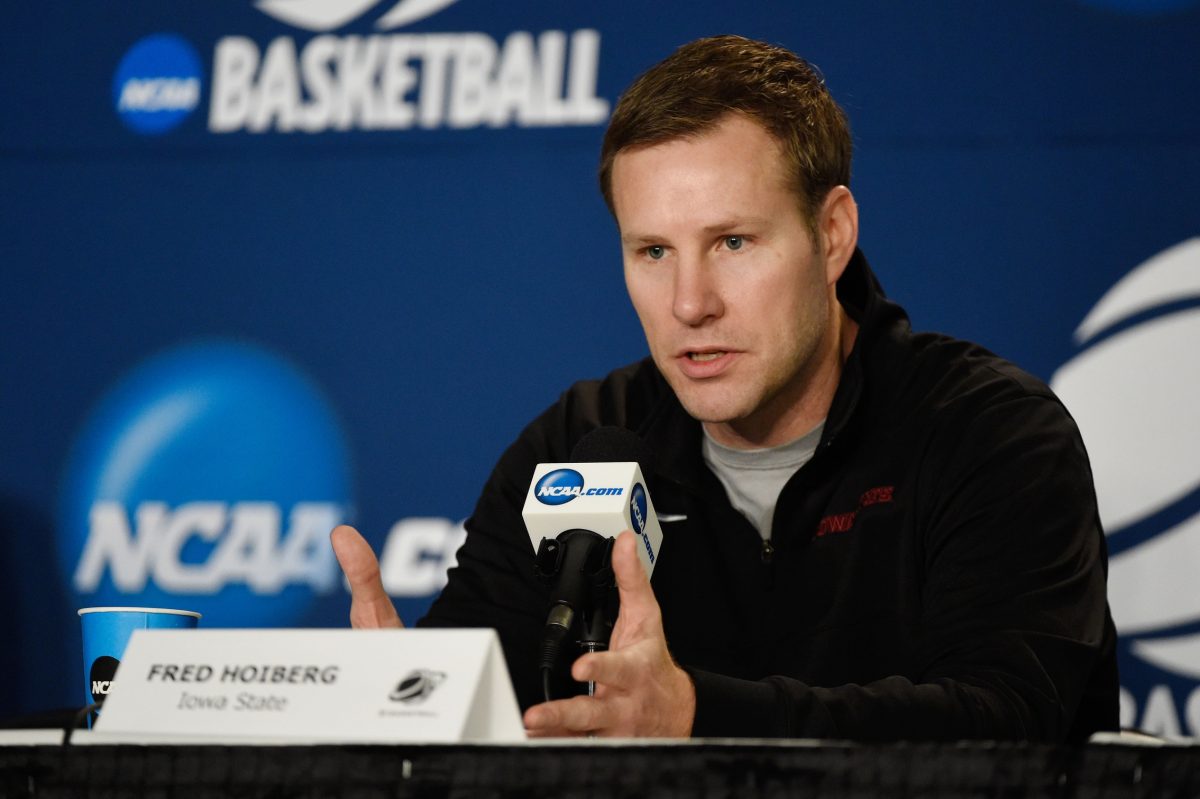 Keep refreshing this page for the latest on Hoiberg Watch, 2015. We will be updating it was the latest links that involve Hoiberg, the Chicago Bulls and any/all implications this story has on Iowa State.

*** The Des Moines Register’s Randy Peterson writes that Fred Hoiberg will always be one of us.

*** A live stream of Fred Hoiberg’s introductory press conference from WHO-TV coming up at 2 P.M.

*** Our Kirk Haaland says goodbye and thank you to Fred Hoiberg.

*** Dan Bernstein from CBS-Chicago has eight questions he would like to ask Fred Hoiberg.

*** The Chicago Tribune’s Steven Rosenbloom asks if Bulls management wanted a coach or a puppet.

*** Jeff Eisenberg of YahooSports.com writes that Iowa State’s golden age doesn’t have to end with the loss of Hoiberg.

*** Hoiberg will be tasked with turning around a rough Bulls offense, according to YahooSports.com’s Kelly Dwyer.

*** CollegeBasketballTalk.com’s Rob Dauster says Iowa State has everything riding on the hire of Hoiberg’s replacement.

*** It’s official. Fred Hoiberg is the head coach of the Chicago Bulls.*** With Hoiberg officially gone, our Chris Williams has a list of possible replacements.

*** Our Rob Gray says one golden era of Iowa State hoops has ended. Is another one soon to follow?

*** The Ames Tribune‘s Bobby La Gesse writes that despite Hoiberg leaving ISU, his bond with Ames will remain.

*** Travis Hines from the Ames Tribune says Hoiberg is following his heart to the NBA.

*** Randy Peterson of the Des Moines Register thinks Hoiberg’s replacement is set up to win.

*** Brian Hamilton of SI.com writes that Fred Hoiberg’s replacement will have a chance to build on Hoiberg’s success.

*** Our own Brent Blum comments on the end of Hoiball.

*** CBS Sports’ Doug Gottlieb comments on Fred Hoiberg’s chances to take the Bulls to the Finals.

*** Video of Fred Hoiberg’s comments at the airport from WHO-TV.

*** Fred Hoiberg spoke with the media before boarding a plane for Chicago.

*** SportingNews.com has a list of eight possible replacements at Iowa State for Fred Hoiberg.

*** Teddy Greenstein of the Chicago Tribune reports on Ames and Iowa State’s love for Fred Hoiberg.

*** Michael Whitlow of PippenAintEasy.com wonders if Fred Hoiberg is the next Steve Kerr.

*** CBSSports.com’s Gary Parrish reports that Fred Hoiberg is traveling to Chicago and is ready to accept the position as Bulls head coach.

*** Our own Chris Williams says Hoiberg Watch is over.

*** Chicago Tribune’s K.C. Johnson says Hoiberg will be introduced as head coach of the Bulls no later than Wednesday.

*** Joe Crowley of the Chicago Sun-Times asks if Fred Hoiberg is ready for a clash of Rose and Butler and if his offense will translate to the NBA.

*** RantSports.com’s Nick Sciria says the Bulls are a risky job for Fred Hoiberg.

*** Frank Isola of the New York Daily News reports Hoiberg’s deal with the Bulls will be worth five years, $25 million.

*** K.C. Johnson from the Chicago Tribune has a timeline for Hoiberg taking over the Bulls.

*** ESPN.com reports the Bulls are confident Fred Hoiberg will be their next head coach.

*** The Orlando Magic already hired Scott Skiles as their next head coach, but the Orlando Sentinel reports that the Magic met with Fred Hoiberg.

*** Former Bull and Fred Hoiberg teammate Will Perdue was on Chicago talk radio Friday to discuss the posibilitiy of his former teammate taking over the Bulls.

*** The guys over at Wide Right & Natty Lite have a list of possible replacements for Fred Hoiberg.

*** YahooSports.com’s Adrian Wojnarowski has interesting things to say about the Bulls’ pursuit of Fred Hoiberg and the downfall of Tom Thibodeau.

*** Chris Cuellar with the Des Moines Register writes that Iowa State recruiting will be okay without Hoiberg.

*** K.C. Johnson of the Chicago Tribune says it’s no surprise that Fred Hoiberg is the top candidate for the Bulls.

*** SI.com‘s Brian Hamilton says Fred Hoiberg can do right by Iowa State if he leaves.

*** Gary Parrish of CBSSports.com says Fred Hoiberg will leave something special behind for whoever takes over in Ames.

*** Travis Hines of the Ames Tribune reports Fred Hoiberg couldn’t commit to recruits about being in Ames next season.

*** Randy Peterson of the Des Moines Register asks if Hoiberg is the dream candidate the Bulls describe.

CFTV: Naz Long on Fred Hoiberg to the Bulls

CFTV: Hoiberg reflects on his days in Ames