MANHATTAN, Kan. – Iowa State (19-6, 10-5 Big 12) had four players in double figures and used its height advantage to defeat Kansas State (13-14, 4-11 Big 12) and remain in second place in the Big 12 Conference. The Cyclones have won three in a row in Manhattan for the first time in school history.

The Cyclones got 44 points from their starting post players, including 18 points from Anna Prins, to control the game from the beginning.

Chelsea Poppens posted her sixth double-double this season with 14 points and 11 rebounds and joined elite company when she grabbed her 1,000th career rebound in the first half. The senior from Aplington, Iowa joins Cyclone great Angie Welle as the only players in school history with 1,000 rebounds and is just the 14th player in Big 12 history to record 1,000 points and 1,000 boards.

Hallie Christofferson had her seventh double-double of the season with 12 points and 10 rebounds and freshman Kidd Blaskowsky was in double-digits for the fourth time in the last six games with 11 points. Blaskowsky drilled a pair of second-half threes after the Wildcats had trimmed the lead to 15 points.

Nikki Moody dished out nine assists for the Cyclones, who had 18 assists on 26 field goals.

Iowa State had a 39-17 lead at the break after holding the Wildcats to just 18.5 percent shooting in the opening half. The Cyclones dominated in the paint in the opening stanza, outscoring Wildcats 18-4 inside and holding a 24-14 edge on the glass. Poppens and Prins had 10 points each in the first half.

Brittany Chambers finished with 18 points and Mariah White added 17 to pace the Wildcats.

The Cyclones return to action Wednesday when they host Kansas at 7 p.m. 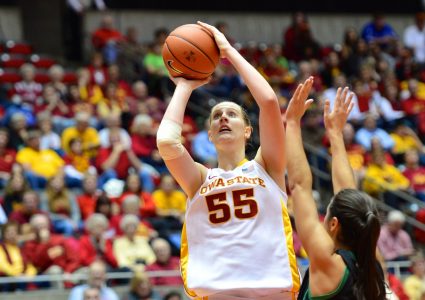 Cyclones drop KU in round one of Big 12 Championship