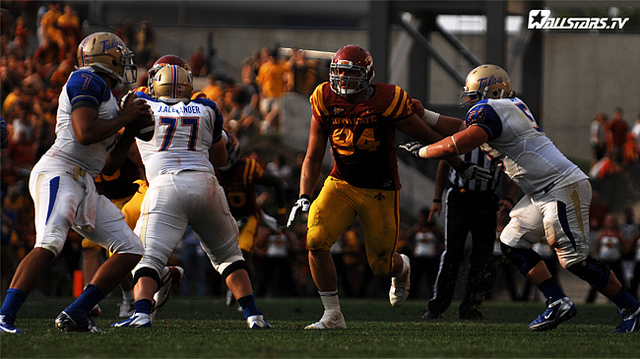 1. Tempo – The single thing you cannot let the Iowa Hawkeyes do is dictate the tempo of a game. I remember back to a better 2010 Hawkeye football team – Ricky Stanzi and company were phenomenal at dictating the pace and tempo of the game. They would run it down your throat because they could and set up play action downfield to DJK and Marvin McNutt. This year, things are quite a bit different. Iowa is a new system but still have the same identity. They are going to run the football. Moreover, the Cyclones can’t let Iowa do this efficiently. I believe that with the recent improvement on Iowa State’s defensive front seven, the Cyclones are up to this challenge. The Cyclones have to initiate tempo on offense at the beginning of the game to keep this Iowa defense on it’s heels. The fast paced jet offense that Iowa State is tailored for is crucial because the Hawks rarely substitute on defense. If the Clones play fast enough, this defense will be tired and when you have a defense tired, they will make mistakes.

2. Turnovers – The Iowa defenses of the past have been very opportunistic groups when it comes to takeaways. Although they have a new defensive coordinator in Phil Parker, the defense is more of the same. This defense will give you places to go with the ball but you have to be precise and not take any unwarranted chances. The Hawkeye defense is the epitome of bend but don’t break. They will play a Cover 6, which is a combination of Cover 2 to the boundary and Cover 4 to the field. This may mean nothing to a lot of you readers but look for Iowa State to throw a lot of short routes to the wide side of the field because the coverage will be soft there. The deep ball will have to be calculated because Iowa’s safeties will be deep and wide to eliminate that throw. Also, what the Iowa defense does a good job of with their outside linebackers is not allowing inside receivers to get a free release. They are very physical and knock a lot of these guys off their initial landmarks. So what all this means is that Iowa State will have to dink and dunk down the field. When the Cyclones get into the red zone, they need to score touchdowns. If you try and force throws down the field it will end up problematic and it could result in a long day for Steele and the Cyclone offense.

3. Stop The Run – Everyone in Kinnick Stadium on Saturday knows what the Iowa football team will be trying to accomplish on offense. They want to run the football. Going into last week, the unknown for the Hawks was their running back situation. You would think they would go to the air more and use their senior quarterback and veteran wide receivers. Well they tried that and it proved to be problematic. So Iowa did what it knows best – that’s run football. Iowa State has to be great against the run and if whoever is the primary ball carrier has over 100 yards on the ground, the Cyclone defense didn’t do their job and will probably come out of this affair with a loss. Jake McDonough will be a huge key to Iowa State’s success or failure. He is a senior defensive lineman who is one of the better ones in the Big 12. He has to play relentless on Saturday, as he will be going up against one of the best centers in the Big 10 (James Ferentz). McDonough will see quite a few double teams at nose guard so this will force him to be physical and be violent with his hands to get off blocks. It is key that the Cyclone defensive line doesn’t let this offensive line get to the second level. That is what makes Jake Knott and A.J. Klein look so good at linebacker. Coach Rhoads said the Cyclones must tackle better and it will have to be done Saturday.

4. Establish the Run – A statement which I made early this week on a podcast with Chris still stands true in my mind as game day nears. “If Shontrelle Johnson has 20 plus touches, Iowa State will win this football game.” Shon John is such a dynamic player that I don’t think this Iowa defense can’t bottle him up. It would also be nice to see Steele find No. 21 on a couple of check downs throughout the day. Now with all that being said, James White and Jeff Woody are still big parts of this game plan. Look for No. 8 to have 8-12 carries and Mr. Woody to tote the rock 5-8 times. The more carries Jeff Woody has the better as well because that means we are in the red zone scoring points. Steele Jantz could end up being the main component on Saturday. What he did last year to extend plays with his feet and scramble when he needed to made all the difference in the triple-OT thriller. Jantz needs to be able to hurt the Iowa defense with his speed when they don’t hold contain and he gets outside the pocket or by stepping up in the pocket and finding seams within the pocket to escape.

5. Special Teams – In a big rivalry game such as this, special teams can win or lose you a football game. In my playing days, I remember Andy Brodell returning a punt in 2008 in the fourth quarter to put the Hawks up by two score, which iced the game. I also remember in 2007 when Bret Culbertson hit five field goals to put away Iowa with 15-13. These memories aside, Coach Rhoads has invested a lot his time as a head coach into bettering the special teams. With the exception of kickoff coverage, those teams played very well last Saturday. However, that was Tulsa and this Iowa team will be more fundamentally sound and more athletic than the Golden Hurricane. Iowa State must be equally sound and cannot afford to make mistakes in the special teams game because Iowa is the type of team that thrives off of mistakes. No matter how good or poor either team played last week, this game is very significant and rest assured both teams will be ready to play. This will be a close football game and I believe like last year an Instant Classic. 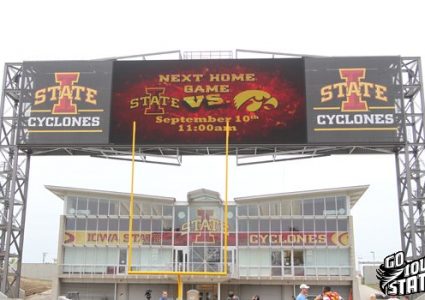 Arnaud’s 5 keys to victory vs. Iowa