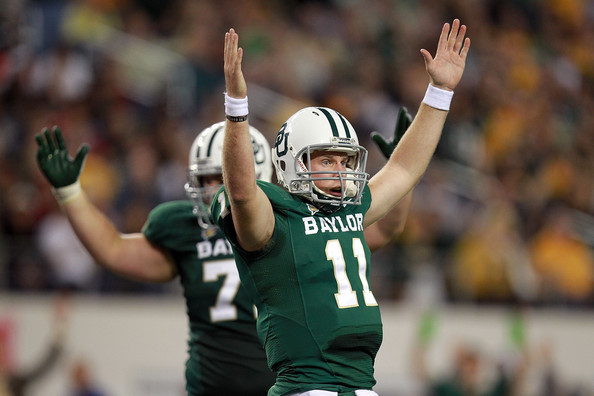 2011 was a breakthrough year for the Baylor football program. In their fourth season under the direction of head coach Art Briles, the Bears finished with a school record 10 wins, an Alamo Bowl victory (their first bowl victory in 19 years) and had the first Heisman Trophy winner in school history.

Last season the team had an outstanding offense, averaging over 350 yards through the air and over 200 on the ground, ending the season as the only team in the nation to finish in the top 10 in both. They return six starters, but with the loss of Heisman Trophy-winning quarterback Robert Griffin III, top 20-pick wide receiver Kendall Wright and Big 12 leading rusher Terrance Ganaway, they will not score at the same ridiculous rate they did last year (45 points per contest).

Senior quarterback Nick Florence will replace Griffin and while Florence won’t be as dynamic as Griffin, in his little game action Florence has steadily improved. In his 2009 freshman campaign, Florence started seven games and threw for 1,786 yards with six touchdowns and nine interceptions. In the two years since then, he has only thrown 24 passes (due to a healthy RG3) for 200 yards and two scores, demonstrating improved decision making that comes with experience. Now a senior, Florence should be a consistent and heady leader for the offense.

There’s no doubt Ganaway was an excellent back but he wasn’t the only good rusher on the Baylor roster. Jarred Salubi, a much more slashing and elusive athlete than Ganaway, ran for 331 yards and three touchdowns last year and capped his season with a 100 yard, two touchdown performance in the Alamo Bowl. Backing up Salubi will be sophomore Lache Seastrunk. Seastrunk redshirted last season after transferring from Oregon and is a shifty runner with great foot speed, putting him in the same mold as Salubi. What they’ll miss most was Ganaway’s ability to pound away at the middle of a defense to open up the rest of the field; they’ll look to Glasco Martin (6-1, 215) to play that role this year. Martin was effective when called upon last year, turning 40 carries into 269 yards and two touchdowns, although he doesn’t quite have Ganaway’s impressive combination of power and speed.

Even with the loss of leading receiver Kendall Wright the receiving corps is still in great hands. Three starters – Terrance Williams, Tevin Reese, and Lanear Sampson – are all back. Williams, one of the more dangerous vertical threats in the Big 12 due to his great blend of size and speed, finished second to Wright in both receiving yards and touchdowns, with 957 yards and 11 touchdowns respectively. This fall he’ll find a lot less open space as defenses will be more focused on him with Wright gone. Reese came in third with 877 yards and seven scores. A former member of the Baylor track team, Reece has the ability to turn a small gain into a big play as evidenced by his 17 yard per catch average and 20 yard per carry average (albeit on just five carries). Sampson is more under the radar than his teammates but for being the team’s fourth receiving option, he had an amazing 572 yards and three touchdowns. The lone new starter is Levi Norwood, a former member of the Baylor basketball squad and a sophomore slot receiver, who gained plenty of experience last fall as a backup receiver and primary punt returner. Recently Baylor also picked up Darryl Stonum, a two-year starter for the University of Michigan and a fifth-year senior. Stonum has one season of eligibility remaining. Even with the loss of Wright this is still one of the conference’s premiere groups of receivers.

Ivory Wade, a former right tackle, moves inside this spring to anchor the middle of the Baylor offensive line and will continue his streak of 33 consecutive games started. For 26 of those games, Cameron Kaufhold has been next to him playing guard and for 17 of those, Cyril Richardson has been at left guard. Troy Baker and Spencer Drango, a pair of 6-foot-6 second year players, will protect the flanks as the team’s tackles.

As is becoming more common in the Big 12, Baylor starts five defensive backs to help combat the leagues many vaunted passing attacks. At one corner they have K.J. Morton, who intercepted four passes (fourth most in the Big 12), broke up another six, and made 75 tackles. Across from him, they’ll line up Joe Williams. Williams packs a wallop for being a cornerback, as he forced a team-high three fumbles to go along with one interception and 12 bat-downs. Mike Hicks plays cover safety for the Bears, a spot he started at every game last season when he made 105 tackles with eight pass break ups and three interceptions. At down safety is Sam Holl, the team’s leading returning tackler (113 stops) who also recorded three interceptions. One of the more vocal leaders of the defense is nickelback/“Bear” defender Ahmad Dixon. Dixon had a big season with 89 tackles, one interception (which he returned for a touchdown) and three fumble recoveries. With every starter from the secondary returning they should improve immensely, but the fact that they were dead last in the conference against the pass should temper expectations. Also consider that four of their top five tacklers were in the secondary, including a deep safety and corner. That means a lot of tackles were made after the offense picked up large chunks of yardage.

The Bears post-spring depth chart reveals two new projected starters at linebacker. At middle linebacker will be Bryce Hager, a redshirt sophomore who made 13 tackles and forced one fumble last season. Hager’s counterpart will be Eddie Lackey, a junior college transfer who arrived in Waco in January. While he is on the small side at 5-foot-11, 220 pounds, Lackey is a guy who can pursue the football sideline to sideline with great speed. He demonstrated his unique athleticism by returning kickoffs – and doing an excellent job at it, gaining over 26 yards per return – as a freshman linebacker at Northwood University. Lackey overtook Brody Trahan, who started three games at will last season and made 32 tackles.

Terrance Lloyd and Gary Mason Jr. return as the starting defensive ends. Lloyd and Mason combined for 15 tackles for loss and five sacks last season. Chris McAllister will be the main backup. He had 1.5 sacks last year. Kaeron Johnson and Nick Johnson (no relation) will play nose and defensive tackle for the Bears. The pair of seniors made 13 tackles last season as they rotated in to spell the starters. With only two linebackers on the field Baylor will really rely on these two to occupy the middle of the field.

Placekicker Aaron Jones is statistically one of the best in school history, as he has set or tied nine records (such as last year’s single season record 75 made PATs) in his time on campus. He made 29-for-44 field goals the last two years but was less than spectacular a year ago when he missed seven of his 17 attempts. Spencer Roth will punt again, and after making only 29 attempts all of last season he should see much more action this year. More punts is a potential issue for a team that only gained 32 net yards per punt last season (118thnationally). Antwan Goodley and Demitri Goodson are scheduled to handle kickoff returns while Norwood will be the punt returner once again.

Defensively the Bears have continued to get better over the last few years (although it might not seem like it if you watched their 67-56 Alamo Bowl win), and with eight starters returning that progression should continue. Still, when you allowed over 37 points per game last year you need to improve a ton, and with subpar special teams play and no Griffin on the other side of the ball the team is in for more of a rebuilding year than they’d like. Expect Baylor to return to the middle of the pack if not lower.