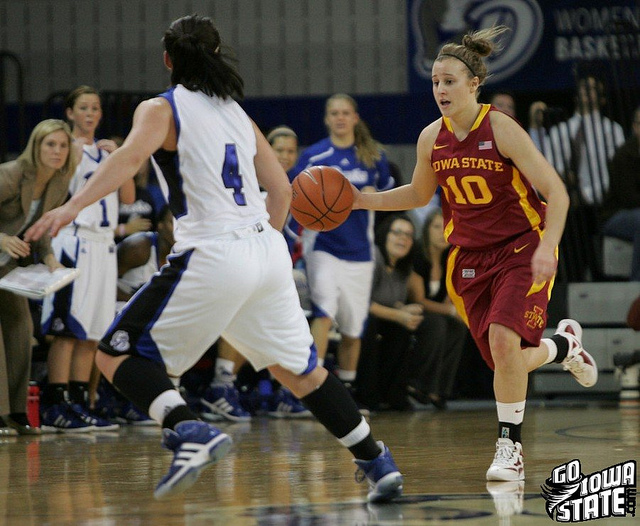 AMES – There’s a simple reason Baylor is undefeated and ranked No. 1 in the country.

No team can match up with the Bears’ star. Iowa State gave Baylor (15-0, 2-0) its best shot Saturday night, but Griner answered each time to lead the Bears to a 57-45 win.

That’s because Griner stands 6-foot-8 and impacts the game in every facet. On Saturday, the junior scored 26 points, grabbed six rebounds and blocked four shots. The number of shots she affected is countless.

“I’ve said from the time she stepped on the campus at Baylor, she changes the way I have to coach,” Baylor coach Kim Mulkey said. “She changes how the game needs to be officiated, and she changes how opposing coaches want to attack Baylor.”

Even with Griner dominating, a gutty Cyclones (9-4, 0-2) bunch nearly pulled off the upset. Anna Prins scored inside to cut the Baylor advantage to 41-36 with nine minutes, 30 seconds to play.

The Iowa State defense did its part getting stops, but the Cyclones couldn’t score on three-straight possessions after the Prins bucket.

Give credit to a long, athletic Bears squad for shutting Iowa State down. The Cyclones shot 37 percent from the floor and turned the ball over 15 times.

Griner scored over Chelsea Poppens to give the Bears a 47-38 edge. A couple of possessions later, Griner spun around Poppens for a 3-point play and a 50-40 lead.

“We see many big girls when we play, but how many play above the rim?” Mulkey said. “Brittney plays above the rim.”

Griner capped her performance with a bank shot from 18 feet to push Baylor’s lead to 54-40 and end any chance of an Iowa State comeback.

Fennelly isn’t interested in moral victories, but he was proud of the way his team bounced back and competed after an 80-51 loss at Oklahoma on Wednesday.

“Our kids did a great job in front of a great crowd,” Fennelly said.

Something about the Baylor Bears brings out the best in Anna Prins. The junior played her best game of the season on Saturday night against the nation’s best player in Griner.

“Prins, she has a great game against us every time,” Mulkey said.

With her teammates struggling to score, Prins kept the Cyclones in the game. The junior showed toughness around the hoop and hit 7-of-12 shots.

“I felt pretty comfortable,” Prins said. “I’m getting more comfortable playing inside and outside. I just have fun.”

“I thought Anna played a great game,” Fennelly added. “She was physical and she wanted the ball.”

Baylor is used to rolling past its opponents. So how did Iowa State keep the No. 1 in the country in check? With a great defensive game plan.

Yes, Griner got her points, but Odyssey Sims – who averages 16.7 points – scored just two. The Cyclones found a way to frustrate Sims and the rest of the Bears not named Griner.

“I thought our game plan was right on the money,” Mansfield said. "It was so good, they didn’t know what we were doing.”

Griner made 9-of-20 shots on Saturday. The rest of teammates combined to make just 10 field goals on 30 attempts.

“Odyssey Sims obviously was (Fennelly’s) focus tonight,” Mulkey said. “He didn’t want Odyssey Sims to get any shot attempts and she didn’t.”

Take out Anna Prins’ 17 points, and Iowa State’s starters scored just 11 points on Saturday. Thankfully, a couple of players came off the bench and provided a spark for the Cyclones.

Mansfield hit a pair of long 3-pointers and finished with 10 points. Brynn Williamson chipped in six points with two treys of her own.

“Lauren and Brynn gave us some baskets and energy off the bench,” Fennelly said.

Mulkey on playing in Ames

“We love that they love women’s basketball here. There’s a great appreciation here and I love it. I love that the fans come out.”

–       Saturday’s matchup with Baylor marked the first time that Iowa State has hosted the No. 1 team in the Associated Press poll.

The Big 12 did Iowa State no favors when it created the Cyclones’ schedule. After games against Oklahoma and No. 1 Baylor, Iowa State is on the road to face Kansas on Wednesday night. The Jayhawks are 12-2 on the season after losing to Kansas State, 63-57, on Saturday night. 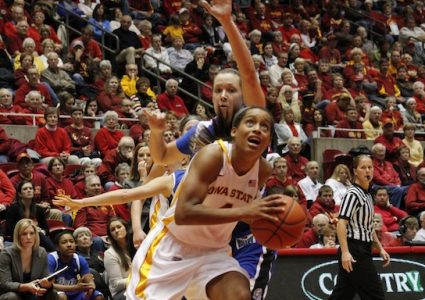 Big 12 Primer: Cyclones hope to give Baylor their best shot 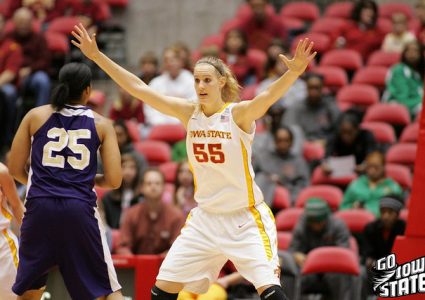