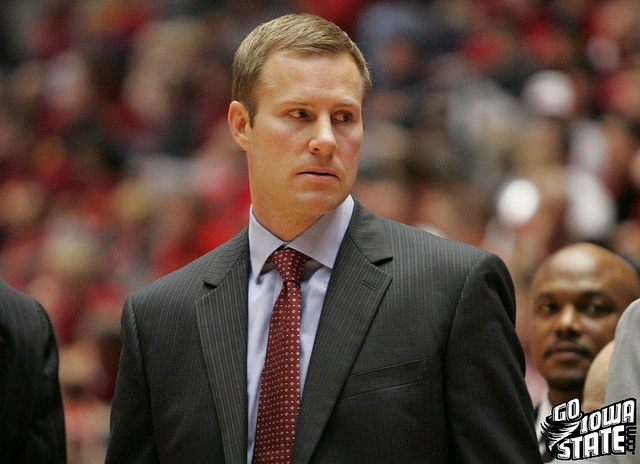 If I can pull out an old school sports cliche, the Cyclones couldn’t hit the broad side of the barn in Tuesday night’s 62-55 loss to Texas.

Despite the fact that Iowa State only shot 33 percent (20-for-60) from the field, the Cyclones still had a legitimate opportunity to win the game in crunch time, being down by only three points with 25 seconds to play.

Other than some really poor shooting, this game wasn’t nearly as bad as the box score will lead you to believe. Here’s the recap.

Royce White – Despite his continuous problems at the free throw line (I’ll elaborate on that in Three Down), can you really NOT give Player of the Game to a guy who finished with 15 points and 15 rebounds? In addition to his double-double, White tacked five assists onto his box score, which is a tough thing to do when the team shoots as poorly as Iowa State did in this one. That number shows how good some of his passes actually were, giving teammates some wide-open looks.

No quit – Other than shooting and a few poor offensive decisions, the Cyclones played well enough to win this game.

Iowa State turned the basketball over (11) less than Texas (15). The Longhorns only shot 44 percent from the field so the defense wasn’t bad.

The rebounding battle was won by Texas, but only by a slim 36-34 margin.

At one point in the second half, the Cyclones trailed by 13 points. Four or five times, I counted Iowa State out of it. Every time that I did that, the Cyclones somehow clawed their way back into contention.

As I wrote at the start of this recap, it was just one of those nights.

This team could have called it a night with 15 minutes to play. They didn’t. That’s encouraging. Shots weren’t falling but the Cyclones stilled showed some moxy.

Chris Babb – Entering this game, Chris Babb was 0 for his last 13 from beyond the arc. In 38 minutes, the junior only ended the night with nine points, but Babb went 3-for-8 from 3-point range. Most importantly, Babb held Texas’ leading scorer on the season, junior J’Covan Brown to a 3-for-16 performance and only 12 points.

Royce White at the line – Only three Iowa State Cyclones attempted a free throw in the loss.

Tyrus McGee went 5-for-5 from the charity stripe. Melvin Ejim was 4-for-4. Royce White made his first, but ended the evening 1-for-7. White’s free throw shooting isn’t the only reason that Iowa State lost this game, but his 0-for-6 second half free throw performance could not have come on a worse night.

Chris Allen/Scott Christopherson – It might have been Chris Allen’s worst game of the season…The senior finished the night 1-for-9 from the field with three points, zero assists and three turnovers.

Scott Christopherson didn’t attempt a 3-pointer on Tuesday night. The senior ended the night with only two points, going 1-for-5 from the field.

So let’s add this up…Iowa State’s two seniors combined to go 2-for-14 from the field for five points.

White’s missed free throws will be talked about ad nauseum, but the Allen/Christopherson 2-for-14 line was the story of this game.