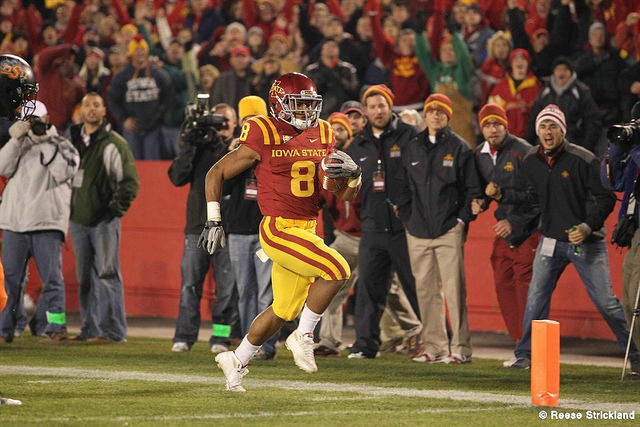 *** I was on 1460 KXNO with Steve Deace earlier today and we got to talking about bowl possibilities for Iowa State. Deace believes that even a 6-6 Iowa State team would be a realistic option for the Holiday Bowl in San Diego and because of certain scenarios within the league this year, I agree.

In my mind, it’s hard to imagine how Iowa State wouldn’t be selected over the Missouri Tigers. Consider that Missouri 1) is leaving the Big 12 and 2) doesn’t travel well and Iowa State has a rock solid case. Then, think about this. If you’re the Holiday Bowl (or any bowl for that matter), do you want Paul Rhoads coaching in your game or Gary Pinkel?

I’m not trying to kick a man when he’s down, but I think it’s a decent point to ponder.

Right now, Rhoads is a rock star in the college football world. Every fan of the sport knows who Rhoads is and if you’re a Cyclone, Hawkeye, Razorback or Gator (you get the point), how can you genuinely not like the guy?

*** Consider this: Paul Rhoads is one fake PAT against Nebraska in 2010 away from taking Iowa State to three bowl games in three years. In the three seasons before Rhoads arrived in Ames, Iowa State was 9-27.

*** While driving home from Ames this afternoon, I heard my boys Murph and Andy replay John Walters’ final call of Friday night’s upset. In the background of the call, I heard the siren. That thing is epic. It stands out on television too. Props to marketing for putting Jack Trice Stadium’s state of the art sound system to good use.

*** When Nebraska first announced that it was moving to the Big Ten and talk of the "Heroes Game" started to erupt, I immediately became concerned about Iowa State potentially being lost in the shuffle locally. While that could very well happen in the future, that certainly isn’t going to be the case this year. Is it me or has Iowa State’s stunning win over the second-ranked Cowboys taken a little bit of luster away from Friday’s showdown between the Hawkeyes and the Huskers? Maybe. Or, maybe it’s that those two programs are both down this season. That’s probably the case but once again, this is more proof that winning cures a lot of problems. Consistently winning football games assures Iowa State of all the recognition that it will ever need on a local level in the future.

*** Two top five Oklahoma football teams were shocked this past weekend in the Big 12. Who knocked them off of the throne? Iowa State and Baylor? Wait…What?

Think about the Big 12 back in say, 2003. Iowa State and Baylor? Now that’s refreshing.

With the Iowa State’s and Baylor’s of the world set to make more money with new Big 12 television agreements in the future, the difference between first and less is only going to shrink in the coming years.

*** Watching Paul Rhoads immediately after Jeff Woody’s game-winning touchdown was priceless. If you look closely, you’ll see Jerome Tiller dump this tiny bottle of what looked to be red Gatorade on Rhoads. That made me laugh, but go back on your DVR and watch the security guy try to keep up with Rhoads who looks like Carl Lewis sprinting to find Oklahoma State’s Mike Gundy. Good times…

*** ESPN sideline reporter Samantha Steele is much more than a pretty face. She’s a fantastic reporter that did a phenomenal job on her opening monologue regarding Oklahoma State’s tragedy that occurred on Thursday evening.

*** I think that sophomore free safety Jacques Washington is going to be a special one for Iowa State. Washington forced a fumble and picked off a Brandon Weeden pass in the first quarter of Friday’s game and in my opinion has been the most pleasant surprise on Iowa State’s defense this season.

*** How about some props for kicker Grant Mahoney? He executed that onside kick on Friday flawlessly.

*** Check checking out CF in the coming days for more reaction from Friday night. Brent Blum and Kirk Haaland have both written columns about the monumental victory.