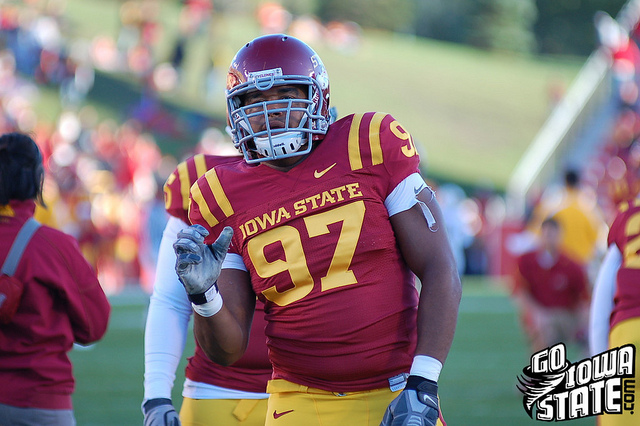 The 2011 Iowa State spring game is less than a week away. On Tuesday morning, head coach Paul Rhoads will address the media in his second press conference of the spring. Here are some tidbits for you fanatics to chew on until then.

Washington with the edge

After Saturday’s scrimmage, it sounds like sophomore Jacques Washington has a significant edge to land the starting free safety spot. Numerous birdies have told me that Washington had a strong scrimmage two days ago.

I’ve been told that other top performers were the entire offensive line, Jevohn Miller, Jeff Woody, Shontrelle Johnson and once again, Jared Barnett.

Wide receivers are closer in 2011

While nobody knows exactly what to expect from Iowa State’s wide receivers next fall, senior Darius Reynolds was pretty confident about one thing in a Friday interview.

This group of mostly unproven youngsters is tight.

“I feel like we are a lot closer this year,” Reynolds said. “Whenever somebody messes up, we pick each other up. We rotate a lot at practice so we’re seeing a lot of different guys make plays. That is always a good sign.”

Reynolds went on to mention Jarvis West, Albert Gary and Chris Young as young players who are having “good springs.”

“Coach is looking for a guy to make certain plays,” Reynolds said. “I want to be that guy. I want to be a threat wherever they put me. I want our opponents to know that we have playmakers on our side and make them a little bit more nervous going into games.”

“Dutch” working for a breakthrough season

When speaking with members of the media last week, Iowa State defensive tackles coach Shane Burnham had nothing but positive things to say about soon-to-be senior Stephen Ruempolhamer. The man they call “Dutch,” is now up to 288-pounds and he’ll be the anchor of Iowa State’s defensive line next fall. Burnham and "Dutch" agree that this could be his best season to date.

“He has had the best spring he has had,” Burnham said.

“I am making some progress,” Ruempolhamer said. “I feel like I haven’t arrived yet.”

Ruempolhamer recorded 33 tackles and 2.5 sacks as a junior.

There’s no better judge of Iowa State’s young offensive linemen than the men who go up against them every day in practice.

So how good is this FAB 5 that we all keep hearing about? I put "Dutch" to the test.

“They work really hard,” Ruempolhamer said. “They are trying to get noticed in the program and I really believe that they’ll be good.”

Who are the most physical members of Iowa State offensive line?

“The best competition is probably Hayworth (Hicks) and KO (Kelechi Osemele) like going against them. We get each other better every day.”

“Dutch” also filled me in on a guy who isn’t being talked about, but should.

“Ethan Tuftee is going to be legit,” Ruempolhamer said. “He holds his ground very well. He’s one of the most explosive player on the team in the weight room.”

Jake McDonough’s dinged up shoulder hindered him in the weight room all offseason long. Don’t worry though. The 6-foot-5, 289-pound junior didn’t just sit around this winter. Despite the setback, he still made progress.

“Our offseason workout is legit,” McDonough said. “I’ve noticed a lot of improvements with my speed.”

McDonough’s primary area of work during the dog days of an Ames winter was on his agility and flexibility.

“You have to get to the lineman first before he gets to you,” McDonough said. “That’s key because we’re dealing with 300-pound linemen every day. They don’t mess around.”

“My pad level is the main thing that has improved a lot over the last year. I am starting to be a little more explosive off of the ball.”