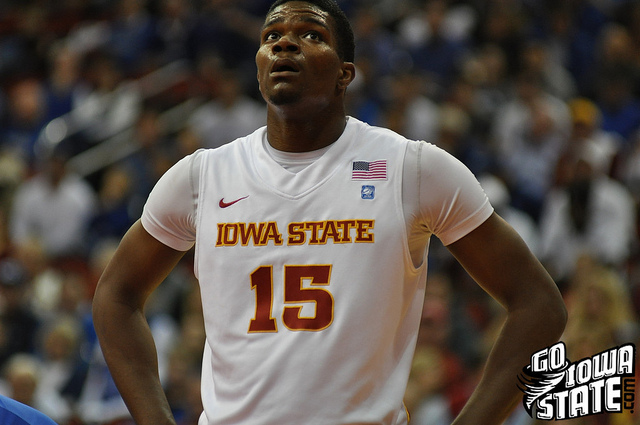 Remember to tune into the CycloneFanatic.com/Wilson Toyota of Ames postgame show on 1460 KXNO and KXNO.com about 45 minutes after the game. We’ll be broadcasting LIVE from Wilson Toyota of Ames located at 2212 S. Duff Ave. Stop by and say hello or give us a call at 866-333-5966.

I’ll start things off with the hot topic heading into this game, which is Jamie Vanderbeken’s health.

“He continues to feel better every day. His swelling continues to go down. We’ll see where things are today (Friday).

Vanderbeken did not participate in Thursday’s practice.

Hoiberg went on to call it a “game time decision.”

Moving on, you can call me crazy, but I think that Iowa State can win this basketball game. My basis for that? It is pretty simple. The Cyclones have to win a close game eventually don’t they? One would think. I admit, my good feelings come from nothing but blind faith. But that’s better than no faith at all right?

–       The Cyclones were 4-of-22 from 3-point line in that game. Obviously, making a few more shots from long range would help Iowa State’s cause.

–        The biggest key to a Cyclone victory? Here’s what head coach Fred Hoiberg had to say about that during Friday interviews.

“After watching film (from last time), our big thing is to show these guys that they can’t get into a 40-minute running match with them,” Hoiberg said. “That is their style. That is their game. They’re too good at it for us to try to go out and match them.”

–       The 2010-11 Cyclone men’s basketball team with has knocked down 236 3-pointers so far this season. The school record for treys in a year was set during the 2008-09 campaign, with 236. Do the math. The chances of this team making some history on Saturday are pretty high.

–       Scott Christopherson has his 72 of those threes. He’s the eighth player in school history to make 70 or more treys. Christopherson set an Iowa State record on Wednesday night by making a 3-pointer for the 28th game in a row.

–       Diante Garrett is currently fourth on Iowa State’s career assist chart. He has 570 dimes in his career. That’s fifth best in Big 12 history.

The Missouri Tigers are a tough nut to crack. For as good as the Tigers have been at home this season, they’ve been that bad on the road. Missouri is 6-0 in the Big 12 in home games and 0-5 away from Columbia. Why exactly is this talented team so bad away from home? I asked Fred Hoiberg that question on Friday afternoon.

“They’ve been close. They played the heck out of Kansas for most of that game. Kansas got hot down the stretch but that was a close game until about the five or six minute mark. They have played well at times on the road,” Hoiberg said. “They are searching for a win on the road right now. They’ll come out fired up and strong. This is a big game for both teams.”

Let’s take a quick look at those Tiger road losses. The slide began on Jan. 8 with a 13-point loss to Colorado in Boulder. After that, it was a two-point overtime loss at Texas A&M. Texas spanked the Tigers by 13 on Jan. 29 and the final two blemishes were to Oklahoma State and Kansas.

It is easy to see that this team is 0-5 on the road. When you dig a little deeper, you see that three of those five road losses were to top teams in the league. In the other two, Oklahoma State has only lost one game at home all season and winning in Boulder is never easy for anybody.

So no, Missouri isn’t a good road basketball team. But they aren’t as bad as their record indicates either.

As I wrote earlier, I think that Iowa State can win this game. More Calvin Godfrey and less of Jamie Vanderbeken might actually help in this specific situation. When Brent Blum and I recorded our podcast on Thursday night, I had convinced myself to pick the Cyclones in this one. The more research I do though, the less confident I feel about stepping out on that ledge. Iowa State is due for a win. But so is a more talented Missouri team.

As always, my heart says to pick Iowa State. But you all should know by now though that right or wrong, I tend to pick with my head most of the time.