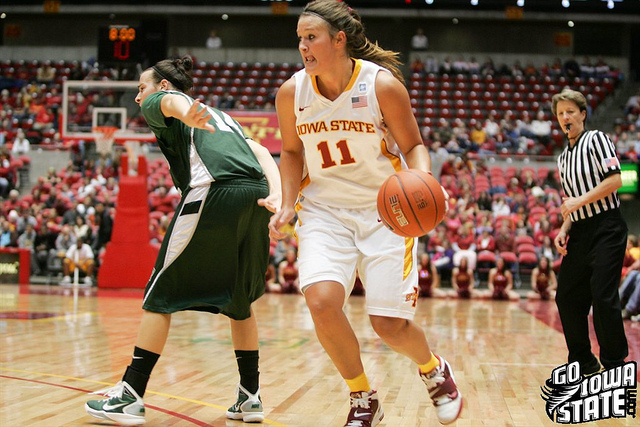 Women’s basketball coverage at CycloneFanatic.com is brought to you by our good friends at Wilson Toyota.

Bolstered by clutch shooting and an opportunistic defense down the stretch, the No. 22-ranked Cyclones held off Kansas State, 61-53, at Hilton Coliseum. The win snaps a two-game skid for Iowa State and improves its record to 17-7 overall and 5-5 in the Big 12.

“It was great,” senior Kelsey Bolte said. “Obviously, we really needed a win. We needed to get back on the winning side of things.”

After suffering heart-breaking losses in the final minutes against Oklahoma and Kansas, Iowa State wasn’t about to let it happen again. With an 11-point halftime lead trimmed to a 48-46 edge, the Cyclones took control.

Point guard Lauren Mansfield started the decisive run with a tough jumper as the shot clock dwindled down to push Iowa State ahead 52-47. Next, Bolte drilled a shot from the right baseline to make it 54-49.

“We’ve not made the extra play and other people have,” Iowa State coach Bill Fennelly said. “If you look at the close games we’ve lost, someone’s made a play. (Today) we made back-to-back plays.”

Once again, Chassidy Cole quietly made her presence felt in one the game’s biggest moments. On the possession after Bolte’s shot, the junior drew a charge on the Wildcats’ Brittany Chalmers to end any chance of a Kansas State (17-8, 6-4) comeback.

“The (charge) on the end line down there, I thought that one was like when you get socked in the gut when you’re trying to get your wind back,” Kansas State coach Deb Patterson said. “That really was a game-changing moment right there.”

Iowa State sealed the game at the free-throw line. In fact, the Cyclones dominated the free-throw stats. Thanks to an aggressive game plan, Iowa State made 21 free throws compared to the Wildcats’ three.

Bolte finished with 25 points and seven rebounds against Kansas State. The Ida Grove native has now scored 20 or more points in all of Iowa State’s Big 12 games except for one.

“Kelsey Bolte is just a great player,” Patterson said. “Like (Kansas State’s) Jalana Childs, she just never relents. She is just going to keep at you.”

Big 12 coaches will be glad when Bolte graduates this spring. All she’s done in conference play this season is average 22.6 and shoot nearly 50 percent from the floor.

With numbers like that, it’s no wonder Bolte draws the opponents toughest defender every game. Thanks to a tweak in Iowa State’s offense, the guard is still finding her shot.

She made only 6-of-14 attempts on Sunday, but she converted all 12 of her free throws.

“We’ve changed the offense a lot in the last three weeks to get her going to the basket so that she gets fouled,” Fennelly said. “If you look at her free-throw numbers, they’ve been going up lately.

“She sees everybody best defender and then some. They can’t guard her at the free-throw line, and she’s pretty damn good at it.”

Anna Prins missed Iowa State’s last game, an 86-85 loss at Kansas, with a sore knee. Her return on Sunday helped the Cyclones top the Wildcats. Prins scored 10 points, including eight in the first half.

The sophomore was helped out by freshman Hallie Christofferson. Continuing a stretch of strong play, Christofferson notched eight points and 11 rebounds.

Iowa State outrebounded Kansas State 34-24 and held a 22-18 advantage in points in the paint. Still, those numbers could have been better.

“I thought our post play was OK,” Fennelly said. “We are still missing shots that we need to make. This game is really hard, and we needed to finish around the basket better.”

–       Sunday’s game was televised by ESPN2 and was the ninth Iowa State game on TV this season. The Cyclones will appear on ESPN2 one more time in the regular season when they host Texas on Monday, Feb. 21.

–       It wasn’t all bad news after Iowa State’s 86-85 overtime loss to Kansas on Feb. 9. For the first time since 2002, the Cyclones had three players score 20 points or more. Kelsey Bolte paced Iowa State with 26 points. Hallie Christofferson added a career-high 21, and Chelsea Poppens a season-high 20.

–       Lyndsey (Medders) Fennelly swished 4-of-5 free-throw attempts at halftime on Sunday. Wilson Toyota of Ames, CycloneFanatic.com and Fennelly donated a combined $1,500 to the Kay Yow Fund for breast cancer research.

It’s never easy in the Big 12, especially on the road. Iowa State will face another tough test away from Hilton Coliseum on Wednesday when the Cyclones travel to Texas Tech. The Red Raiders (17-7, 4-6) snapped a six-game losing streak by throttling Colorado, 72-44, in Boulder their last time out.