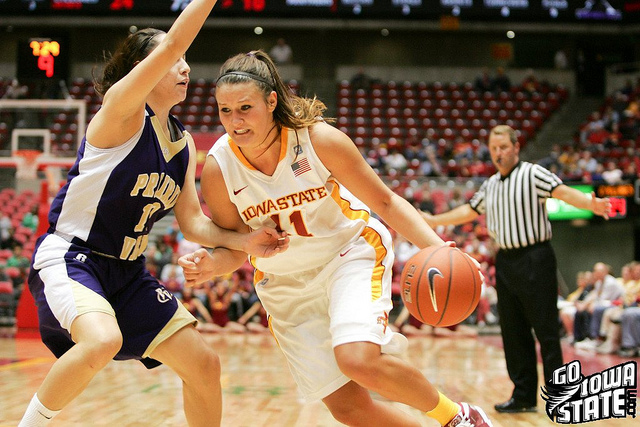 Women’s basketball coverage on Cyclone Fanatic is brought to you by Wilson Toyota of Ames.

AMES – Iowa State got it exactly the type of game it wanted. The undermanned Cyclones just couldn’t finish the job.

“I was really proud of our team’s effort today,” Iowa State coach Bill Fennelly said. “I thought we played really hard against a great team. That’s the best team A&M’s had in my time.”

The athletic Aggies entered the game averaging 83 points per game. The Cyclones wanted to slow the pace and keep the game in the 60s. They did just that. Unfortunately for Iowa State, it couldn’t score enough.

Despite Kelsey Bolte and Lauren Mansfield’s heroic efforts, the Cyclones struggled against a stingy Aggies defense. Bolte and Mansfield combined to score 38 points on Saturday. The rest of team only accounted for 13.

Texas A&M – who leads the nation with a plus 11.2 turnover margin – forced Iowa State into 20 turnovers against only 10 assists.

The loss snaps a streak of 19-straight home wins for the Cyclones, eight of which came against Big 12 opponents. The win is Texas A&M’s first at Hilton in program history.

“You don’t know how hard it is to come in and win here,” Texas A&M coach Gary Blair said.

Well, it helps when Danielle Adams is on the roster. The 6-foot-1 forward dominated both ends of the court, finishing with 25 points, 12 rebounds and six blocks. Every time the Cyclones tried to get back in the game in the second half, Adams answered.

The senior leads the Big 12 in scoring with 22.4 points per game after combining to score 59 against Texas and Iowa State.

“Danielle Adams is a special talent,” Fennelly said. “She can step away and shoot the three. She’s hard to guard because she’s mobile, she’s active.”

In the first half, Adams muscled inside for points. After the break, she showed tremendous touch, sinking three 3-pointers.

“We tried to double team her,” Fennelly said. “We tried to get up on her when she was on the perimeter. But she’s so strong and her angles are good.”

With Adams drawing much of Iowa State’s attention, Maryann Baker and Sydney Carter drilled consecutive 3-pointers to put the game out of reach and send the Cyclones to their second-straight loss in the Big 12.

Kelsey Bolte is only capable of doing so much. Sooner of later, some of her Iowa State teammates are going to need to carry a little of the scoring load.

Once again, Bolte did the heavy lifting, scoring 25 points and grabbing a career-high 12 rebounds in the loss.

“Kelsey Bolte, it’s amazing what she is doing for this team,” Bill Fennelly said. “You think about what she’s doing with not a whole lot of help – we’ve had a lot of great players here, but they’ve had a little more help. She’s playing at a level that is as good as any player ever here.”

Bolte, along with Lauren Mansfield, kept Iowa State in the game.  The Ida Grove native hit 7-of-13 shots, including two 3-pointers. She was also the only Cyclone to make it to the free-throw line, sinking 9-of-10.

The performance makes Bolte the only player in the Big 12 to start the conference season with four games of 20 points or more. The senior is now averaging 17.3 points per game this year.

Iowa State faced a familiar problem against the Aggies on Saturday – finding secondary scorers. Bolte and Mansfield did their parts. The rest of the team? Not so much.

“Bill (Fennelly) does not have as much firepower on offense as he’s had in the past,” Gary Blair said.

The Cyclones made 4-of-18 shots in the post against Texas A&M’s athletic front.

“I have no doubt that the other girls’ shots will come,” Kelsey Bolte said. “Stay confident, keeping shooting the ball.

“Lauren and I both know our teammates are going to come back and are going to do fine. We just need to stay positive and stay confident they are going to hit their shots and they will.”

“She’ll get cheese on her cheeseburger tonight,” Blair joked.

–       Blair also touched on the hiring of Fred Hoiberg, calling it “great.”

“(Hoiberg) can be Lieutenant Governor,” Blair said. “Bill is still the Governor.”

Iowa State will face a familiar foe in its next game when the Cyclones travel to Nebraska on Wednesday (11-6, 1-2). Earlier this season, Iowa State knocked off the Cornhuskers, 64-43, after outscoring Nebraska by a count of 43-17 after halftime.

Nebraska’s Dominique Kelley did not play in the first matchup due to lingering injuries. The senior is averaging 14.1 points per game. 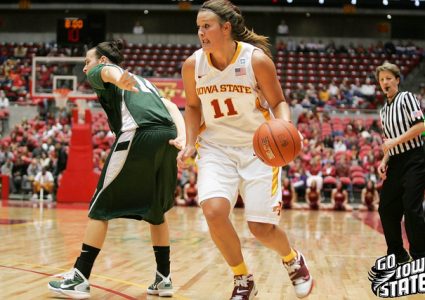