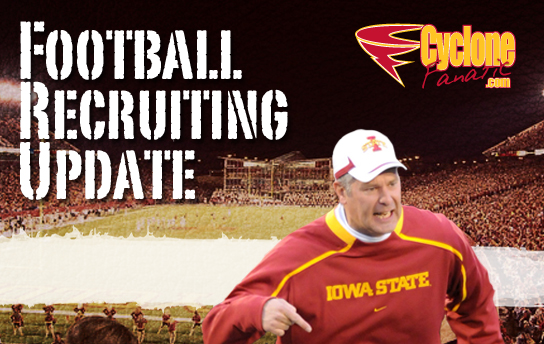 Note from the editor: NONE of this information comes from premium websites. We’re not in that business. These are observations from Trevor based off of what CF has reported and other FREE content that is floating around the Internet.

Happy Holidays Fanatics! We finally got our first big snowstorm here so it is starting to feel a little more Christmasy. As most of us know, football recruiting for the Class of 2011 is starting to draw to a close. A lot of things will be happening here over the next few weeks and there is almost guaranteed to be good and bad news. What I am going to try to do here is present a weekly blog of current situations and outlooks as we know them. There will not be any premium info. I won’t be delivering any earth shattering news. In most cases it will simply be full of opinions. I am going to try and answer questions regarding the basics of Iowa State football recruiting. That’s the point of the blog. Chris has been and will continue to do a great job receiving news of commitments and things like that.

In the future, once players have signed a LOI with ISU, I will then put together a profile. Each profile will have the same format and will give some information and a prediction as to what position they will play, what their ceiling may be and perhaps a comparison to a recent player in college football. I am not an expert here. If I was, I wouldn’t be writing this. I would be working for a recruiting service or a college program. I will be wrong. I will also get lucky and be right. There will probably be some things I write that at the time, sound ridiculous. In the end, I just hope that I can provide some facts and some reasonable outlook for players as they come into the program. Now, let’s get this started.

First of all, we need to get a rough idea of what Iowa State’s situation is here in terms of numbers. Initially, we were looking at the 18 range. Iowa State had a transfer so the program could get to 19 and back log four recruits I believe that puts ISU at 23, considering there is no attrition from the current squad. Remember that these are rough numbers. Sometimes we do not know who was awarded a scholarship as a walk-on. So, if the team is at 23, ISU has three commitments remaining. I think it’s ridiculous to think there won’t be transfers or non-qualifiers so I am going to call it 26. IF there are four early enrollees and 24 if not. So we are looking, realistically, at four to six more guys.

We still have a lot of guys in play here. Devondrick Nealy, Armonze Daniel, Joshua Grady, J.J. Gaines and Bojay Filimoeatu are all guys who Iowa State would love to have. I don’t remember a recruiting cycle where in December, Iowa State had to worry about having enough room for prospects. Does anyone else? This staff didn’t fill its allotment with a bunch of guys they didn’t want either. The guys committed were offered because the staff thinks they will be able to contribute to the Cyclone football team. Right now I am willing to trust them. There isn’t enough evidence to do otherwise.

Now here are some notes on specifics. First, my wish list:

– Devondrick Nealy – I think he is the sort of playmaker that Iowa State needs on the offensive side of the ball.

-Armonze Daniel – The Cyclones have a shortage of big-bodied true linebackers right now and he could fill that void.

– J.J. Gaines – He probably fill what I see as the biggest future hole at safety. He is a great athlete and looks to be the real deal.

-Walton Taumoepeau – I think we all agree that Iowa State could use someone to at least provide depth next to Rump next season. Taumoepeau could be that guy.

– Joshua Grady – Probably the best overall athlete on the board outside of Nealy. I think he has a huge upside as a quarterback and if it doesn’t work there, his athleticism will allow him to move.

Now, obviously I tried to stay realistic with this list. I would have liked to throw in Jadeveon Clowney and Tony Steward but I didn’t feel that was helpful. Is Iowa State likely to get all of the guys on the list? No, but we have a very good chance with four of them so I think the Cyclones could get three.

I went over the numbers earlier in terms of how much space Iowa State may or may not have. Let’s put it in the middle and say the program has five left, which, depending on signing day and how the offseason goes, maybe right or it may be way off. Here is who I think Iowa State gets:

-Walton Taumoepeau – Iowa State has a need at his position. JUCO kids want to come out and play right away. The Cyclones can offer that to him and in the end, I believe he ends up with the good guys.

-Armonze Daniel – Again, we have a depth issue and some possible immediate playing time. If he was willing to redshirt, then he would have 3 years once AJ and Jake graduate.

-Kori Babineaux – I really think this staff would like to grab a big outside receiver. I think this is the guy were get. He won’t be an immediate star but could definitely be a contributor in the future.

-Keithen English – The program needs to build depth on the interior defensive line. He could be a guy you start with. He will be raw because he was an offensive guard in high school but English looks to be very athletic and right now has the size to play.

– J.J. Gaines – There is some pretty stiff competition for him, but I think Paul Rhoads closes this one down. Iowa State can offer a chance to compete right away at a couple different positions in a system that will run a lot of five defensive back sets.

Trust me, Iowa State won’t get all five of those guys. This is just me trying to figure out how the Cyclones match up in terms of needs. Those five just seem to fit pretty well. Joshua Grady doesn’t because I think the three quarterbacks Iowa State will sign might scare him away. I think Iowa State will just be over-matched for Nealy. I mean it’s Auburn, Alabama, Michigan and Iowa State. I hate the self deprecating attitude I see out of a lot of ISU fans, but man, it’s just hard for me to think the Clones will overcome all of those programs. If they do, that will be the best crow I have ever eaten and trust me, I have a lot of experience with eating crow.

So, there you go. From my viewpoint, that’s where Iowa State sits today. I know it’s quite a bit of stuff and not really in depth, but it was mean as a short catch-up piece. In the future things will be more focused and hopefully more informative. Like I said, the main thing I want to bring is an individual breakdown of each recruit, not an inaccurate prediction of who will be in Ames.