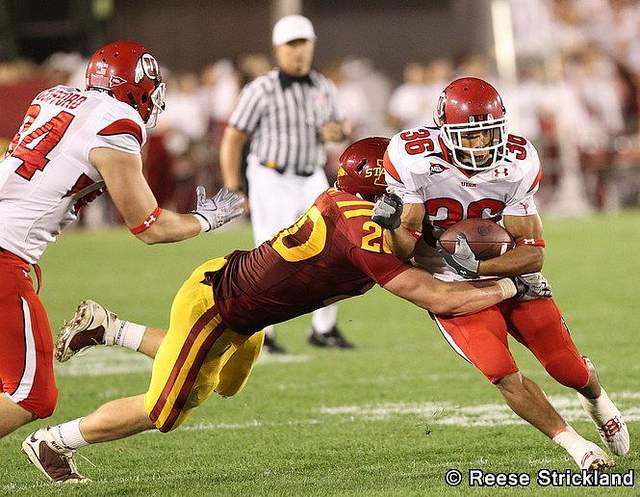 Generally, this award is giving to a quarterback, running back or you know, someone who gets into the end zone. Yes, Alexander Robinson was a legitimate candidate for Iowa State’s offensive MVP award. After all, besides kicker Grant Mahoney, Robinson has scored the second highest number of points on the team this season with 30. He’s run for 449-yards and five touchdowns. But Robinson’s first half of 2010 hasn’t screamed MVP to me. Quarterback Austen Arnaud hasn’t been consistent enough to win the award. Tight end Collin Franklin deserves to be talked about. He’s caught 25 passes for 279-yards and two touchdowns. But still, it is hard for me to label a guy averaging 46.5 receiving yards per game as an MVP.

I’m going with senior center Ben Lamaak and yes, this point could be argued. But in a season where penalties have plagued the Cyclones up front, Lamaak has stayed relatively free of them after his position switch to center. The offensive line hasn’t been awesome to state the obvious, but take Lamaak away and there’d really be a mess up front.

In the end, it is difficult to give an MVP award to anyone on a unit that is ranked 93rd nationally.

The Bash Brothers…The Clones…Call then what you want. Unlike on the offensive side of the ball, picking out a defensive MVP, or two, was pretty simple. These two sophomores lead Iowa State in tackling, Klein with 62 and Knott with 58. Both players have three interceptions on the season and Knott has forced three fumbles. I couldn’t pick between the two. It’s like trying to pick between George Strait and Johnny Cash. They’re both so legit, it is impossible to do. Coming into the season, I knew that these sophomore linebackers would be good. I didn’t believe that they would be the heart and soul of the Iowa State defense though.

Newcomer of the Year – Shontrelle Johnson and Jeff Woody

These two freshman running backs are co-backups to Alexander Robinson. I wouldn’t be overly confident with one of them having to carry the load on their back alone yet, but together, the rabbit and the bulldozer make for a formidable pair. You might be seeing a whole lot more of them come Saturday if A-Rob is out. Punter Kirby Van Der Kamp gets and honorable mention in this category as well.

It is hard to argue with scoring 52 points and putting on one of the most exciting shows in Jack Trice Stadium history. Everything clicked in this game offensively and the defense was sturdy when it had to be.

The debacle against Utah and the rout in Iowa City could have easily won this “award,” but losing a close game to the Wildcats in Kansas City for the second year in a row easily takes the cake in my opinion. Losing to Iowa and Utah was somewhat expected before the season began. The Kansas State game was one that most Cyclone fans had circled as a “must win” for Iowa State to go bowling in 2010. Iowa State got that game back in some books by beating Texas Tech. Regardless of how the rest of the season goes, Iowa State will have to upset somebody to reach six when it is all said and done.

The Cyclones are tied for 13th as a team in turnover margin halfway through the season at +.83.

Honestly, if you would have told me that six game through the season that Iowa State’s offense would be ranked 93rd nationally, scoring only 26.67 points per game, I wouldn’t have believed that the team would even be 3-3 at this point. Still, the offense showed me enough in that Tech game to believe that they can do it again later on in the year.

“Inconsistent,” said quarterback Austen Arnaud. “We’ve got to be more consistent. Against Texas Tech and early against Utah, we kind of came out of our shell. We need to continue to do that and have great weeks of practice.”

It is going to be tough but Iowa State can still make a bowl game this year. Wins against Kansas and at Colorado appear to be imperative.

It has been a disastrous first season for Turner Gill in Lawrence. In his inaugural game as the Jayhawk head coach, mighty North Dakota State came to town and ruined everything with a 6-3 win. Last week’s 48-point loss to Baylor made things stink even worse.

Colorado is currently 3-2 with a scoring offense ranked 107th nationally, averaging just over 18 points per game. Things do not look well for Dan Hawkins. Will his team already be cashing it in when the Cyclones come to town on Nov. 13? Colorado’s schedule does lighten up a tad before their date with the Cyclones as games with Baylor, Texas Tech, @ Oklahoma and @ Kansas are on the horizon. Still, the Buffs might not be favored in any of those games.

No question. In order to go bowling, Iowa State MUST beat both of those northern opponents.

After that, it looks a lot like last season. Iowa State has to upset somebody like they did the Huskers in 2009. Let’s keep it real too. It more than likely will not happen in Norman or Austin. So this upset has to come at home against Nebraska or the Missouri Tigers.

I have Nov. 20 vs. Missouri highlighted in my media guide. The Tigers are 5-0 but are still less explosive than most had envisioned back in August. Still, it is a good football team that will likely be a touchdown-plus favorite when they come to Ames. We’ll learn a lot more about the Tigers over the next five weeks when they’ll play @ Texas A&M, Oklahoma, @ Nebraska, @ Texas Tech and Kansas State.