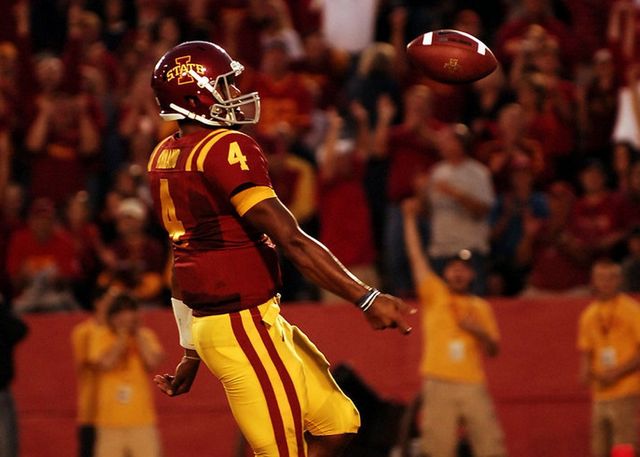 Now that was some wild wacky stuff. Something happens when Texas Tech comes to Ames. I can’t put a finger on exactly what it is. But I like it.

Iowa State’s 52-38 win over Tech on Saturday night was without a doubt one of the most exciting games in the history of Jack Trice Stadium. The offense clicked. Big plays were common and you Cyclone fanatics are happy again.

Austen Arnaud – A segment of the Cyclone Nation had written this fifth-year senior off after Iowa State’s 2-2 start to the season. He got injured on the first play of last week’s win over UNI. Arnaud could have folded. His response? Arnaud played what might have been the best game of his Cyclone career. Arnaud went 20-for-28 for 189 yards and four touchdowns against Texas Tech’s 100th ranked pass defense. This week’s game ball could have gone to the entire offensive line for opening up the run game. But Arnaud shut a lot of people up on Saturday night. He proved that he indeed is a Big 12 quarterback that can put up a lot of points. There’s no question that number four gets CF’s week five game ball.

Alexander Robinson – A-Rob tweaked an ankle in the victory but was still very effective with his 12 carries for 103 yards and a touchdown. Robinson ripped open a 65-yard run in the first half and averaged 8.6 yards per carry. His total is now up to 404 on the season, at an average of 80.8 per game.

Shontrelle Johnson – This just in…Shontrelle Johnson isn’t all hype. The dude is for real. “The Rabbit” said “hello” to the Big 12 Conference on Saturday night. Some might call it a coming out party. When Robinson went down, Iowa State’s true freshman stepped up. He didn’t just fill in either. He made a difference. Johnson’s 61-yard touchdown run in the fourth quarter was hopefully the first of many game breaking plays in his Iowa State career. Johnson ended the game with 102 rushing yards on 12 carries, while averaging 8.5 yards per carry.

Darius Reynolds – The man they call “Money” caught his first touchdown in a Cyclone uniform against the Red Raiders. It was a 36-yard touchdown pass from Austen Arnaud in the second quarter. Reynolds finished the night with three receptions for 51 yards.

Collin Franklin – Iowa State’s most consistent receiving threat comes from the tight end position in Collin Franklin, who caught six passes for 68 yards and a touchdown against Tech. Franklin leads Iowa State in receiving on the season now with an average of 44 yards per game and 21 receptions. Most importantly, the big target is a security blanket for Arnaud.

Tom Herman – Okay, so Iowa State’s offensive coordinator can’t really get a helmet sticker because you know, he doesn’t wear a helmet. So we’ll give him a headphone sticker instead. Herman called a hell of a game on Saturday night. The fake punt, the halfback pass, the methodical fourth quarter drive and the list goes on. That was what a Tom Herman offense is supposed to look like.

Jake Knott & A.J. Klein – Can we get a nickname for these two please? How about the “Bash Brothers?” What about the “Clones?” Something is needed. Jake Knott, the reigning Big 12 Defensive Player of the Week, gave us all an encore in the Tech win when he recorded 13 tackles, forced a fumble and recovered a fumble. Meanwhile, his partner in crime, A.J. Klein, made 11 tackles and yes, picked off another pass (that he possibly could have taken to the house but he took a knee instead). Klein now has 52 tackles on the season while not is at 48. Yes, they’re numbers one and two on Iowa State’s roster with David Sims ranking third. Sims has 27 tackles. These two are carrying this defense. Did I mentioned that they’ve combined for six interceptions as well?

Jeremy Reeves – This true sophomore scored a touchdown for the second game in a row. Last week, it was a pick six. On Saturday, Reeves took a Tech onside kick to the house to ice the game for the Cyclones. He also had 10 tackles.

Total offense – Iowa State’s offense had been sluggish in the four games prior to Saturday night’s win. Actually, that is probably putting it nicely. The running game finally got going and that opened up the pass. The totals featured 252 rushing yards (three running backs all had 12 carries for Iowa State including Robinson, Johnson and Jeff Woody) and 189 through the air. That totals 441 yards for the Cyclones and 52 points.

Red zone offense – The Cyclones went 4-for-4 in the red zone. Three of those possessions resulted in touchdowns and one was a Grant Mahoney field goal. The field goal was the result of a touchdown that was called back due to an offensive pass interference penalty on Jake Williams.

Turnover ratio – There was one close call in the first quarter and another late in the game, but Iowa State didn’t turn the football over. Texas Tech did three times. Ball game.

The punt game – Iowa State flirted with danger at the end of the first half when a snap sailed over the head of freshman punter Kirby Van Der Kamp that eventually led to a Texas Tech touchdown. Van Der Kamp struggled in the wind tunnel that is Jack Trice Stadium early on but recovered nicely to average 40 yards per punt on four kicks. He also ran 17-yards on a fake that resulted in an Iowa State first down. And yes, I’ve been told that it was a called fake punt, even though it totally looked like a broken play. While this unit did some good things in the win, the one mistake gave the opposition seven free points. That can’t happen down the stretch against better teams. Clean it up fellas.

Pass defense – Texas Tech quarterback Taylor Potts threw the football 62 times in Ames on Saturday night. Because of that ridiculously skewed statistic, I can’t be too hard on Iowa State’s pass defense that gave up 377 yards and five touchdowns. But still, that stat is enough go on my “three down “ list in a game that featured a ton of positives.

Crucial penalties – At halftime, Iowa State had committed five penalties for 50 yards, including one questionable offensive pass interference call that ended up costing the Cyclones four points. Holding calls and false starts plagued the Cyclones in the first quarter as they had all season long. But give Iowa State’s players credit here. The Cyclones cleaned things up in the second half and finished with only six penalties for 55 yards.

This win was encouraging on all sorts of levels for Iowa State.

Where was this offense throughout the first four games of the season? Who cares? It is here now. Something clicked over the last seven days. Iowa State’s offense didn’t just find a pulse on Saturday night. It found a life. Think about how different you felt about this group of players a week ago compared to how you do now. Yes, this is the same group of Cyclones who scored two touchdowns against Kansas State and Northern Iowa combined. They’re here now. Will they stick around for next week?

To me though, the most encouraging thing about the win was the fact that it was against a South team not named Baylor. Iowa State went toe-to-toe with a team that was a national title contender two years ago and beat them. Do you remember where Iowa State’s program was two years ago? I know, I know…Different teams, different times.

But this win was just more proof of the progress that Paul Rhoads has been making in Ames since he took the job. He ended a massive losing streak in Lincoln. He led his overachieving 2009 team to a bowl game victory. He just beat Texas Tech for the second time in school history and the first time for a Cyclone team without  a guy named “Seneca” playing quarterback.

How about a win over a top 10 program?