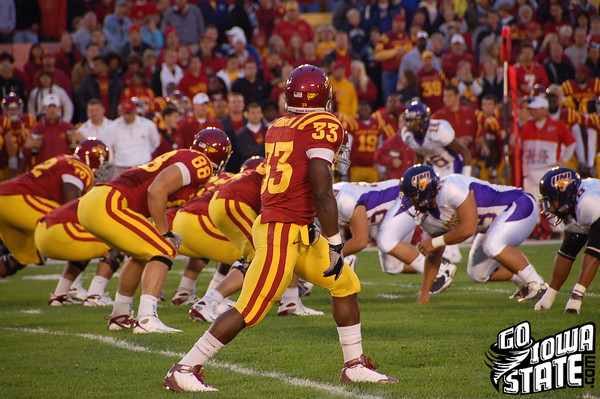 In last week’s final look at Texas, I attempted to make Cyclone fans smile. If you didn’t read it, I posted a bunch of YouTube videos of good things that have happened to the Cyclone football program over the last decade. My point was to attempt to make you feel better about life in general before what I anticipated would be a beat down in Austin. Being an Iowa State fans isn’t the easiest thing in the world. Being kicked in the stones relentlessly is somewhat expected. It seems like it at least.  I’ll be 100 percent honest with you right now. When I wrote that preview last Friday morning, in no way did I think that Iowa State would walk out of Austin with anything close to a win.

Look who had to eat a ton of crow all week long? Let me tell you something fanatics. That bird tasted delicious. May I have another?

And now, here Iowa State is with a 4-4 record on Halloween weekend, preparing to take on one of the worst high-major football teams in the country.

What a difference a week makes right?

Iowa State is now a 19-point favorite over a Kansas team that has been obliterated 159-24 by their last three opponents, Baylor, Kansas State and Texas A&M.

My head tells me that Iowa State will win this game by three touchdowns. My heart tells me to be guarded in this situation. Nobody gave the Cyclones a chance last week. Heck, nobody gave Kansas a shot to beat Georgia Tech in week two, after losing to North Dakota State in their opener.

College football can be an awfully odd game sometimes.

Here’s a preview of some of the key matchups to watch out for on Saturday.

Iowa State’s success in Austin started up front. For really the first time this year, the Cyclone offensive line dominated an opponent. The result was a 120-yard rushing performance by Alexander Robinson and a protected Austen Arnaud.

Oh yeah…By the way, Robinson finally appears to be healthy.

“It is night and day. We are a lot different football team when he is running as hard and as explosively as he was running,” said offensive coordinator Tom Herman. “Let’s not diminish that our offensive line was giving him a lot of great creases to run through.”

That offensive line could be weakened this week if senior center Ben Lamaak is unable to play. Rhoads called him “day-to-day” during Monday’s press conference. Lamaak played a flawless game against Texas, before he went down with a knee injury late in the fourth quarter.

If Lamaak can’t go, Herman is optimistic that others, specifically Sean Smith and Ethan Tuftee will be able to fill in adequately.

“We will be fine. Ben has done a great job for us but no matter who is playing for us at this point in the season, we will be okay,” Herman said. “Obviously any time that one of your senior leaders goes down and misses significant time in a football game, that could have a negative effect on you. I thought that Sean Smith came in and played really well.”

After re-watching the Texas game, another theme that I took away from it was guys stepping into their roles and executing. Josh Lenz,Darius Reynolds and Jeff Woody all come straight to my mind.

Lenz and Reynolds both had clutch touchdown receptions for the Cyclones. On a couple of different occasions, Woody used a strong extra effort to gain Iowa State first downs.

“At this point in the season, the tryout phase is over,” Herman said. “People are starting to show up who need to show up. People are taking spots and playing bigger roles. The biggest tryout is how you perform on Saturdays.”

Lamaak’s status makes me at least a little bit nervous as to how this inconsistent Iowa State offense is going to perform. I can’t stop thinking about how bad Iowa State’s offensive line looked in games without Reggie Stephens a season ago.

At the end of the day, the pessimist in me needs to shut up because Kansas’ defense is really bad. The Jayhawks are ranked 91st overall, but 111th against the run and 114th in pass efficiency.

I imagine that the Jayhawks will load the box to try and force Arnaud to beat them. Don’t sing it, bring it. Iowa State’s offense should put up a healthy amount of points tomorrow.

Another backup quarterback will attempt to make a name for himself against Iowa State tomorrow. I hate backup quarterbacks. If you’re a Cyclone, you should too. I could get into specifics as to why right now, but I don’t have the heart to bring you all down on a Friday.

Enter Utah native and JUCO transfer Quinn Mecham to the equation. He was redshirting this year, until Jordan Webb and Kale Pick went down with injuries.

“It really doesn’t matter who we play against. We have to go out there and win,” said Iowa State defensive coordinator Wally Burnham. “He has a pretty quick release. He is a big, tall kid.”

“We are going to work on what we know they do. That is all that you can do. You can’t go making up stuff. If they go to something different, then we need to adjust.”

So what exactly does Kansas’ 112th ranked scoring offense do well?

“They run the zone,” said Burnham. “They are a big zone-read team. They are a big screen team. They do a lot of things to try and confuse you with formations and where they put people. They are fast paced. They aren’t as fast as Oklahoma but probably more than Texas.”

The biggest story surrounding the Texas upset was Iowa State’s uncanny improvement on the defensive line. The Cyclones went from getting little to no pressure at all up front, to having junior Jacob Lattimer, in his first career start, win the Big 12 Defensive Player of the Week award.

“You hope at some point in the season that they start doing the things that you’ve been working on since two springs ago,” Burnham said. “They just turned themselves loose. They played aggressive.”

Now, the key is making that type of play a trend and not a one-time deal.

“Keep pushing. Keep our nose to the grindstone and our eyes straight ahead,” Burnham said. “I hope to goodness that Texas is behind us. That is a memory. Make it as old as I am.”

–       One of Kansas’ top playmakers, D.J. Beshears, has been suspended for tomorrow’s game. Beshears currently has 556 kickoff return yards on the year, with a touchdown.

–       Is this a trap game for Iowa State? Is there a chance that the Cyclones will look past Kansas? How does the team start the game?

–       Win convincingly on Saturday and then the Nebraska game becomes interesting.