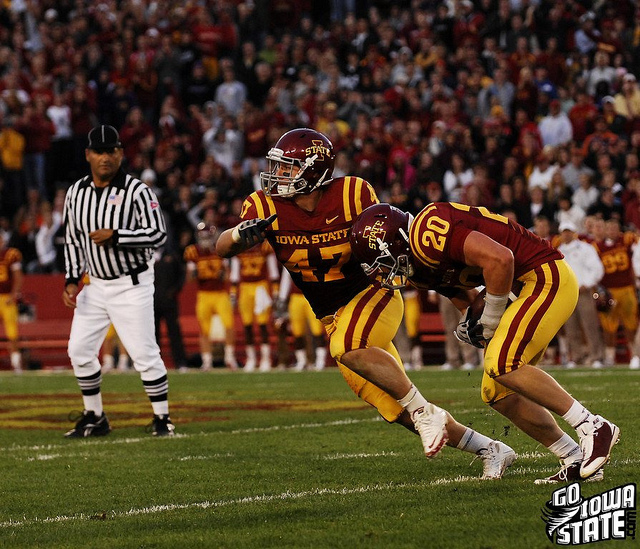 We’re trying something new this week here at CycloneFanatic.com. In the past, I’ve always typed out a complete transcript from Paul Rhoads’ weekly press conference. Instead of that, fanatics can now CLICK HERE to listen to the entire press conference courtesy of CF. Instead of typing the whole thing out, I’m going to give you these notebooks with highlights and some opinion instead. As always, you can send me a PM on our forums with your preference.

Enough housekeeping. Let’s get to some football stuff.

Three Iowa State running backs received exactly 12 carries in Saturday night’s 52-38 win over Texas Tech. A tweaked Alexander Robinson ankle was the primary reason for that. This morning, Paul Rhoads informed the media that Robinson did not practice on Sunday evening.

“We held him out yesterday,” Rhoads said. “The trainers don’t think that it will have any adverse effect on his preparation of whether he plays this Saturday.”

Rhoads said that the ankle slowed Robinson during preparation for last week’s game against Texas Tech. The Iowa State training staff is going a different way with treating the injury this week.

“We practiced him through it last week and looking back on it, we should have rested him earlier in the week because we didn’t make improvement,” Rhoads said. “We’re going to try to go that route. We’ll probably even limit him some tomorrow and have a healthier Alexander on Saturday.”

Do you remember what the tone of our message board was like a week ago from now? The amount of Tiller vs. Arnaud threads equaled how many points Iowa State’s offense put up on Saturday night. (Yes, I counted exactly 52 of them for you wise guys out there.)

During his press conference, Rhoads was asked if he had planned on playing Jerome Tiller prior to the Texas Tech game. Here was Rhoads’ answer.

“The first decision was who starts? Quite honestly, that was answered early in the week because Austen was healthy," Rhoads said."

So there you have it. There was no quarterback controversy. All that Arnaud had to do was prove that he was healthy and the starting job was his.

"The next decision was how are we playing as a football team with who is on the field and whether we wanted to run it more, maybe we wanted a perimeter game that Jerome could give us or if things were moving along a the pace we liked and that is exactly what was happening," Rhoads said. "When you put 24 points on the board with him running the show, there was no need to make any adjustments or changes at that point.”

As for Arnaud, he did practice on Sunday, despite his sore left shoulder.

“He did everything in practice yesterday,” Rhoads said.

Iowa State only missed seven tackles during Saturday night’s victory. That’s a great stat against any opponent. It is outstanding against Texas Tech.

“Most of that game was played in the open field,” Rhoads said. “Any time that you can do that against an opponent, yet alone a team that threw it 62 times, most of those tackles were made in the open field, is a pretty impressive feat.”

How big was the Tech win?

A good friend of mine called me on Saturday night and said that he thought the Tech win was bigger than last year’s upset in Lincoln.

Paul Rhoads didn’t put any more stock on the Texas Tech win than the one over Northern Iowa a week before. The fact that Tech is in the Big 12 South doesn’t mean much to the coach either.

“Every victory is so important,” Rhoads said. “Whether it comes against a South opponent, a North opponent or an independent or whomever it is. The fact that it was a South team is just a piece of it.”

Realize that as a coach, Rhoads has to say that. This was a giant victory for more reasons than the W that goes next to Iowa State in the column.

Yes, in my opinion, beating a southern opponent not named Baylor was monumental for the future of this program. Keep in mind that before Saturday night, Iowa State was 1-7 against Texas Tech. Here is Iowa State’s record against other opponents from the South again, not named Baylor.

On Saturday night, the Cyclones lined up and flat out beat a quality South opponent. That momentum could go a long way when you consider the future of the Big 12 and the fact that Iowa State will have to play all of those schools every season from here on out.

“It could have been some sort of a turning point for us with that victory on Saturday night of further convincing ourselves that we are getting things,” Rhoads said. “I think it was evident as an offensive football team with the points that we put up on the scoreboard but I think there was evidence also defensively.”

“You can look the defense and say, ‘well you gave up 38 points.’ Well, we spent most of our first half with zero on the scoreboard before a well-executed two-minute drive by them. The other was a play after the botched punt attempt. We gave up a drive, forced a field goal and then a little bit later we forced a fumble and then a three-and-out. Those were two huge drives for the defense. The defense contributed to that victory. I think that we are starting to get to that point where a culture is becoming established.”

Putting the Utah game in perspective

Iowa State is 4-0 in its short history in playing the Utah Utes. The last time these two teams met was way back in 1976, when the Cyclones won 44-14.

Let me tell you something. This isn’t your 1976 Utah team that will invade Ames on Saturday.

Kyle Whittingham’s ball club is ranked 10th in both the AP and USA Today polls. They’ve been in the national conversation for years (just ask Alabama) and Iowa State will have to play better than it did last week to pull off the upset.

That’s the bad news. The good news is that this is an outstanding opportunity for this football program to take another step in the right direction. A top 10 program is coming to Ames and Vegas only sees the Cyclones as a four-point underdog. Opportunities like this don’t come around very often.

“They’ve been to the BCS bowls,” Rhoads said. If people fall out, they have a chance of finding themselves right back in the picture again. With all of those things being considered, yeah, it is a marquee game.”

Rhoads does have a bit of a history with Utah. When he was the defensive coordinator at Pittsburg back in 2005, his Panthers met Utah in the Fiesta Bowl, in Urban Meyer’s final season coaching the Utes. Utah won that game 35-7.

“They play the game so fast,” Rhoads said. “That doesn’t mean that they are blessed with a bunch of 4.4 and 4.5 athletes. That is a team that understands exactly what it is they are supposed to do in all phases, and plays it lights out. You do that when you have a culture that is established. They clearly have that culture established. When you do that, you start winning games.” 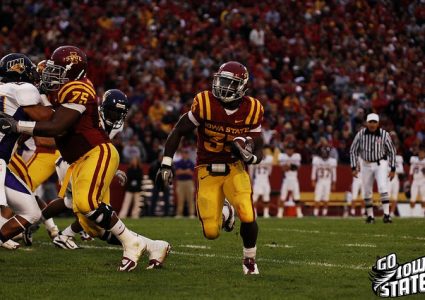